DEVELOPMENT-MOZAMBIQUE: What To Do When a Cyclone Hits

MAPUTO, Mar 20 2007 (IPS) - Sandra Alberto (picture) was heavily pregnant when Cyclone Favio struck Mozambique earlier this month on 2 March, ripping the zinc roof off the house she and her two children had taken refuge in. 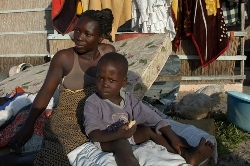 Sandra Alberto (32) held her children to prevent them from being blown away by Cyclone Favio. Credit: UNICEF/Thierry Delvigne-Jean

”I grabbed hold of my children because I thought the wind would blow them away,” she said. ‘‘Roofs and other objects were flying all over the place.”

The 32-year-old Alberto was talking to United Nations Children’s Fund (UNICEF) communication officer, Thierry Delvigne-Jean, who was visiting the coastal town of Vilanculos in the southern province of Inhambane.

Cyclone Favio killed two children and one adult and badly damaged houses and buildings in its path, including an estimated 220 school classrooms and the hospital.

‘‘I could see zinc roofing wrapped around pylons like paper,” Delvigne-Jean told IPS. ‘‘That showed the strength of the winds.”

Moreover, the cyclone came at a time when the government and its partners were battling with another emergency. In the central region, unrelenting rains and severe flooding has forced over 160,000 people to flee their homes. Buildings have been destroyed and farmland swamped in Zambezia, Manica, Tete and Sofala provinces.

By the beginning of March, the cumulative death toll from the flooding was put at around 40 people. It is far less than the estimated 700 people that lost their lives during the floods in 2000 at the same time of the year.

Moreover, this time there was no cholera epidemic, again an achievement as people are concentrated in the same places during time of emergency. Cholera is endemic in Mozambique.

The government and its development partners agree that they are better prepared to deal with emergencies now than they were seven years ago. This southern African country has had more than its fair share to deal with.

It suffered a chronic emergency in the form of a 16-year-long civil war which claimed the lives of over one million people before ending on October 4 1992. Apart from cyclones and floods, it has suffered severe droughts and even a strong earthquake last year which measured 7.5 on the Richter scale. The quake killed at least five people.

Delvigne-Jean was amazed by the authorities’ rapid response this time round. ‘‘Just two days after the cyclone, I was surprised to see how busy people were fixing their roofs and the power pylons. Some 150 Mozambican soldiers were distributing water bladders and helping out where they could.

‘‘All the patients from affected hospitals were transferred to tents that had been set up alongside the destroyed wards. Business carried on as usual. Everywhere you went there was a sense of energy,” he pointed out.

Another 50 tents measuring 72 square metres, provided by UNICEF, were to be set up for school children to carry on with their lessons.

What is the secret to such efficiency in one of the world’s poorest countries? Since 2000, emergency preparation has been high on the priority list for the government and its partners. There is a contingency plan in place, and the National Disasters Management Institute (INGC) meets regularly with its partners to monitor the situation.

Different partners are ready to take charge and coordinate particular aspects of an emergency as it arises. For example, the British non-governmental organisation Save the Children and UNICEF co-lead on education and issues to do with the protection of children, such as child abuse and care for orphans.

Even when the first major flooding of the year hit in the middle of the night, the response was good and nobody drowned. This was despite 340 millimetres of rain falling within 24 hours and submerging parts of the city of Quelimane in the central province of Zambezia.

The 3,000 affected people fled their homes because they were prepared. ‘‘We had distributed leaflets, used cars with megaphones and the radio to tell inhabitants to expect flooding and what to do,” Paulo Zucula, the director of INGC, said. ‘‘The people knew where the temporary shelters were set up. Nobody had to be led by the hand.”

Zucula stressed that it is imperative that the districts have more capacity to respond immediately. ‘‘In any disaster, 90 percent of deaths usually occur in the first hour, so our aim is to empower the communities to prepare and react.

‘‘They must be kept informed about possible emergencies and equipped with information about what to. Most importantly, they need to be given the necessary rescue equipment such as boats,” Zucula explained.

INGC, with its partners, has stepped up awareness campaigns throughout these districts during the current rainy season.

According to Chris McIvor, programme director at Save the Children in Mozambique, the organisation has worked with INGC to design leaflets with simple messages in local languages to prepare communities for disasters.

Some 10,000 leaflets are being distributed this month (March 2007) throughout all the high-risk flood districts. Community radio journalists are being trained to reiterate the messages on radio.

McIvor gave examples: ‘‘In the past, motorists and children have been swept away as they cross rapidly flowing rivers and streams to get home quickly when they see the flood water rising.

‘‘This campaign gives them life-saving and practical advice. For example, to not cross rivers; to move to higher ground when they hear warnings; to keep their documents in a plastic bag to prevent damage; and to keep a supply of drinking water because wells become easily contaminated during floods.”

For now, the over 160,000 people who are homeless due to the floods need to have access to basic services, including clean drinking water to avoid any major outbreak of disease. Delvigne-Jean also told IPS that the areas where the floods have been most severe are also the areas with the highest HIV/AIDS prevalence rates.

In some of these areas estimates of HIV prevalence are close to 26 percent, well above the national average of 16.2 per cent. ‘‘Those living with HIV have special needs and are therefore especially vulnerable to disease,” Delvigne-Jean said.

These areas also have a significant number of orphans. The ministry of social welfare is training community workers to identify orphans and other vulnerable children. The children are given basic survival kits such as blankets, pots and soap.

Nobody knows how long people will be displaced or the exact extent of the damage to infrastructure. It is estimated to be in the tens of millions of US dollars. It is also unclear when people will be able to return to agricultural production, the means of survival for most of those affected.