UNITED NATIONS, May 30 2007 (IPS) - The United Nations is commemorating its annual “International Day of U.N. Peacekeepers” to mixed reviews, its successes being tainted by increasing accusations of sexual abuse and misconduct by its troops, and more recently, charges of illegal arms trafficking in return for gold in resource-rich Democratic Republic of Congo. 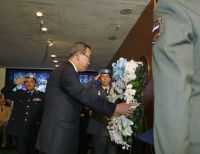 As the cost of peacekeeping has hit a staggering 5.4 billion dollars each both in 2006-2007 and 2007-2008, the current budget is projected to rise to 6.7 billion to 7 billion dollars when the United Nations decides to deploy new peacekeeping missions to Darfur, Chad and the Central African Republic later this year.

While the surge in peacekeeping operations had placed a strain on the organisation, he told the U.N. Administrative and Budgetary Committee recently, “its staff had responded to that unprecedented surge with professionalism and dedication.”

Speaking during the fifth annual International Day of U.N. Peacekeepers on Tuesday, the Under-Secretary-General for Peacekeeping Operations Jean-Marie Guehenno said: “We hope this occasion will serve as a reminder of the invaluable work of our blue helmets who each day risk their lives trying to bring peace to conflict-torn societies.”

In a statement released here, the United Nations paid tribute to the sacrifice of those who died – “the greatest monument to their contribution (being) a set of U.N. peacekeeping successes in 2006.”

The list of successes attributed to peacekeepers last year included the first elections in 40 years in the Democratic Republic of Congo; the solidifying of peace and justice in West Africa with the transfer of indicted war criminal and former Liberian President Charles Taylor; helping implement a major peace agreement in southern Sudan; and supporting elections and helping establish rule of law in Haiti.

U.N. Secretary-General Ban Ki-moon said that in 2006, the fourth year in a row, more than 100 men and women died in the service of U.N. peacekeeping.

“Now, with out deployment at a record high, more soldiers, police and civilian staff face danger in places like Sudan, the Middle East and Haiti,” he noted.

“I cannot accept the risks as the ‘cost of doing business’. I am determined to do everything possible to safeguard the security and safety of our U.N. personnel in the field, advocating robust mandates to ensuring they have the equipment they need to carry them out,” Ban added.

Currently, there are over 100,000 troops from 115 countries serving in 18 missions overseas. The three largest troop contributors are Pakistan, India and Bangladesh, which together provide over 35 percent of all blue helmets.

But the cost of the operations is borne primarily by the 27 European Union countries, plus Japan and the United States.

Still, the New York-based U.N. Association of USA (UNA-USA) points out that Washington is 569 million dollars in “permanent debt” to the United Nations, specifically for peacekeeping.

Furthermore, says the organisation, these arrears have been left unaddressed in the 2008 U.S. budget. Going by its past track record, it is also unlikely that the United States will pay the additional 500 million dollars allocated in the new budget.

“This means, unless the U.S. Congress acts soon, U.S. arrears for U.N. peacekeeping dues will exceed 1.0 billion dollars by the end of 2007,” UNA-USA said in a report released last week. “Paying our dues to the United Nations is not an option, it is a commitment.”

Although the United States is expected to pay 27 percent of the peacekeeping budget under a scale of assessment agreed to by all member states, the U.S. Congress has imposed a cap of 25 percent.

During a visit to the United Nations last week, Senator Joe Biden, chairman of the U.S. Senate Foreign Relations Committee, told reporters he would initiate a move to remove the cap on U.S. funding for peacekeeping operations.

“The timetable is immediate. We would try to pass it for this fiscal year,” he said, even as the administration of President George W. Bush was pushing for new sanctions and a new peacekeeping mission to the politically-troubled Darfur in Sudan.

Addressing a recent meeting of the Administrative and Budgetary Committee, Yu Chong of China told delegates that with further expansion of peacekeeping, related expenses had grown dramatically, “and the figure is expected to rise.”

That, she pointed out, placed a huge burden on member states and, under those circumstances, it was important to consider how better to utilise resources and avoid mismanagement and fraud.

“Additional mandates did not necessarily mean the need for additional resources and new institutions,” she added, calling for better utilisation of existing structures and resources.

Speaking on behalf of the African Group at the United Nations, Eric Franck Saizonou of Benin complained about the low percentage of African businessmen taking advantage of procurement opportunities in peacekeeping, as well as the under-representation of African countries in terms of both number and gender in the personnel of peacekeeping missions.

The largest number of peacekeeping missions is in Africa, including Western Sahara; Democratic Republic of Congo; Ethiopia and Eritrea; Liberia; Cote d’Ivoire; Sudan and Sierra Leone.