RIGHTS: U.S. Senators Call to “Stem the Bleeding” in Darfur 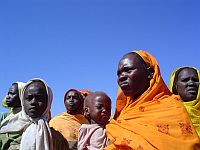 Displaced women and children stand together in the Intifada transit camp in South Darfur. Credit: USAID

Biden, Benjamin Cardin of Maryland and Norm Coleman of Minnesota – all senators on the Foreign Relations Committee – met with U.N. Secretary-General Ban Ki-Moon, Sheikha Haya Rashed al Khalifa, president of the General Assembly, as well as with members of the Security Council.

“The U.S. needs the U.N. and the U.N. needs the U.S.” explained Biden, who has traveled in Darfur and Chad where the Sudanese violence has been spreading across the border.

Darfur is of the highest priority “in a bipartisan way” in the U.S. Congress, Biden said, stressing, “The bottom line is this: there is genocide taking place.”

Since it began in February 2003, when members of the region’s ethnic African tribes took up arms against what they saw as decades of neglect and discrimination by the Arab-dominated government in Khartoum, the Darfurian people have been subject to government-sponsored displacement, rape and murder.

The violence orchestrated by the Sudanese government and perpetrated by its Janjaweed militias has claimed at least 400,000 lives, displaced 2.5 million people and left more than 3.5 million men, women and children struggling to survive amid violence and starvation, according to the U.N.

The U.N. Security Council, which first discussed Darfur almost one year into the crisis in April 2004, authorised a resolution in August 2006 for 22,500 U.N. peacekeepers for Darfur, yet not one has set foot on the ground thus far.

The Council is awaiting Sudan’s consent before deployment.

It has been two years since former U.N. Secretary-General Kofi Annan visited Darfur and said, “We have to solve this problem today, not tomorrow.”

But Khartoum “is still playing for time to survive,” Adeeb A. Yousif, of the Sudan Social Development Organisation, and who works on the ground in Darfur, told IPS.

Khartoum has made a habit of going back on its word to the international community.

In January 2007, Sudanese Presidential Adviser Mustafa Osman Ismail said the African Union commander in Darfur could decide to send non-African troops to the violent region if the continent could not provide enough soldiers to preserve security.

When asked whether there will be U.N. troops on the ground in Darfur, he told Reuters, “You are right.”

In April 2007 upon his return from the Arab League Summit where he met with al-Bashir, Secretary-General Ban Ki-Moon urged the U.S. and Britain to delay their plans to push the U.N. Security Council to impose sanctions on Sudan.

Ban announced that a new round of negotiations would be held in Africa and New York that month, aimed at persuading Khartoum to permit a joint U.N.-AU force of more than 20,000 troops in Darfur. Interestingly, in March 2007, al-Bashir had reneged on an agreement that had been reached after months of negotiations to allow just 2,200 heavily armed U.N. peacekeepers into Darfur.

After negotiations in late April with Ban, Sudan reversed its position again, saying that it has no objections to a 3,000-strong peacekeeping force.

“We need to test this now, we need to start the deployment, Sudan said it had no objections one year ago,” U.S. Ambassador to the U.N. Alejandro D. Wolff said in response to Sudan’s new position.

So far, the U.S. has held off on sanctions at Ban’s request. But President George W. Bush has threatened Sudan with a “Plan B” of increased sanctions if it doesn’t agree to the full deployment of a “hybrid” force of 22,500 U.N. and African Union (AU) peacekeepers and police officers.

“Before we talk about sanctions, let me have some more political space to deal with this dialogue with them,” Ban told reporters here in April.

Under-Secretary-General for Peacekeeping Operations Jean-Marie Guehenno joined Ban in insisting that without the political support of “all key stakeholders in Darfur, any peacekeeping force would meet an enormous challenge.”

“We know that there is a need for a political solution. But you must stem the bleeding now,” Biden said Monday. “We can not wait five or six or seven months for there to be any action taken on the ground.”

Biden is known as one of the most outspoken U.S. lawmakers in urging the Bush administration to intervene in Darfur.

“Were I able to make the decision I would impose a no-fly-zone immediately and I would commit U.S. forces to stop the Janjaweed now,” Biden stressed.

In April, Biden summoned Andrew Natsios, Bush’s Special envoy to Sudan, to testify before the Foreign Relations Committee on the Darfur crisis. Natsios came under fire from Biden and other U.S. lawmakers who expressed impatience with lack of progress in Darfur.

Biden told Natsios during the hearing that “it’s time to put force on the table and use it.” He added that senior U.S. military officials in Europe told him that 2,500 U.S. troops could “radically change the situation on the ground now.”

Ban expressed hope to the senators that Khartoum would consent to allowing the second and third phases of peacekeeping troops on the ground. The Security Council has already begun the “likely months-long process” of securing funding for and deploying the 3,000 peacekeepers Khartoum has approved for the first phase.

The hope is that final consent from Khartoum would come soon, but it would still take some months – although less than a year – for the rest of the troops to be on the ground, Biden said.