HAVANA, Jul 2 2007 (IPS) - Juana Hilda Naranjo no longer worries when it rains. For the last three years she has been living in a modern apartment out of reach of the water and wind, thanks to the efforts of the Taller de Transformación (Transformation Workshop) in the poor, predominantly black Havana neighbourhood of Pogolotti. 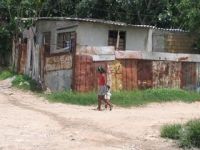 “I used to have to put out pots and pans when it rained, because of the leaks, and the house would flood,” Naranjo, 69, told IPS. In 1980 she had moved from the interior to an area called Isla del Polvo, a marginal section of the Havana district of Marianao, where the families of migrants from other provinces have lived for nearly a century.

Official figures reflect a housing shortage of 500,000 units in this Caribbean island nation of 11.2 million. But 15 percent of urban dwellings and 38 percent of rural housing units are in poor condition, according to the last national census, carried out in 2002.

In 1993, after the so-called “storm of the century”, which damaged or destroyed around 30,000 homes and caused an estimated one billion dollars in economic losses, the Taller de Transformación in Pogolotti drew up a project for building 25 houses for the residents of Isla del Polvo.

But the project was initially looked at with scepticism by the potential beneficiaries.

“Many local residents did not want to take part, because they thought the project was not really going to bring results,” said Noemí Reyes, the social worker who heads the Taller. So a construction brigade was created, made up mainly of women, who were trained at the Instituto Superior Politécnico José Antonio Echeverría, a vocational-technical institute in the capital.

An agreement was later reached with local institutions that had experience in construction, to provide support for the community in the building process.

The initial plan was expanded to 62 housing units, which are one of the main achievements of the Taller, one of 20 set up by the Grupo de Desarrollo Integral de la Capital (Group for the Integral Development of the Capital – GDIC).

GDIC, an initiative of the municipal legislature, was created to tackle social problems generated by poverty in different parts of the city.

According to the United Nations Development Programme’s Human Development Report 2006, 4.7 percent of the Cuban population is living in poverty.

During the severe economic crisis of the 1990s, the neighbourhood of Pogolotti, which was founded in 1911, suffered problems of water shortages and garbage collection, and the authorities were hard-pressed to cover the needs of vulnerable groups like poor single women and elderly persons.

With few resources, the Taller de Transformación set out to improve the material, social and cultural conditions in the neighbourhood in 1990, a task that at the time seemed like an impossible dream.

“At first it was really hard to break through to the community,” said Reyes. “They told us that a lot of people had shown up with promises. But we didn’t promise them anything, because we had nothing to give – only an interest in providing solutions to difficult social cases.”

Based on an assessment of the problems and needs carried out with the participation of the community, the Taller designed a strategy that focused on issues like sanitation, environmental education, reforestation, urban planning, prevention of social problems, and culture.

Because the Taller first listened to the local residents’ demands and then fit the work to their needs, the initial mistrust quickly disappeared. “When you involve the community from the very start, you can get things done,” said Reyes.

“Unfortunately, many people were sitting in their homes waiting for the Poder Popular (the local government) to resolve their problems and they weren’t participating,” said Reyes, 57. But that passive stance was transformed into activity when efforts got underway to bring gas and public lighting to the neighbourhood, which people had been anxiously awaiting.

Folk-dancing and other cultural groups have joined in the reforestation efforts on the banks of the Santoyo River and the “sacred” forest of Pogolotti, the name given by local followers of AfroCuban religions to a former garbage dump that is now a wooded area.

So did the students of a weaving course created by 71-year-old Genoveva Hechavarría, which today represents an alternative source of income for a number of families.

Pogolotti, which contains three slum areas, has a population of 26,800 and covers a total area of just over five square kilometres. Eighty percent of the residents, most of whom are black, are labourers.

The Taller, whose members are all women, mainly social workers, also faced mistrust on the part of local organisations and institutions, which feared meddling in their traditional areas of activity.

But “actually the Taller facilitates community labour; we don’t replace any other institution,” said Reyes.

The group is now heavily relied on by the local authorities, who they advise and provide with the results of their ongoing studies. “We have taught the delegates (of the Poder Popular) to listen, because many of them were not trained in community work, and we help them in their administration,” said Reyes.

The Taller’s funding comes from international non-governmental organisations like Oxfam Canada, Norwegian People’s Aid and Bread for the World.

They have also received support from the non-governmental Martin Luther King Jr. Memorial Centre, an organisation based in Pogolotti that foments participative development work based on popular education.

The Taller’s team was trained there in the methods of community work in a course on popular education. The Centre has also helped mediate in the implementation of projects in conjunction with international organisations.

“We see this relationship as a source of strength, especially because of the spiritual support and training,” said Reyes. “We show up with any problem, and they provide us with guidance and solutions, without any bureaucracy. We feel they are a part of us.”

After 17 years of work in Pogolotti, Reyes believes that even after the economic crisis is finally totally overcome and the four-decade U.S. economic embargo against Cuba is lifted – the biggest obstacle, she said, for solving the shortage of decent housing – new difficulties will continue to appear.

She said the most urgent challenge is the continuous flow of people from the provinces to the capital. Migrants from the provinces mainly end up in precarious shacks in Isla del Polvo, where they basically scrape by with the black market sale of products at stands lining the pot-holed streets. This, said Ruiz, is the wake-up call to pay attention to immediate and future challenges.