PESHAWAR, Jul 27 2007 (IPS) - Threatening letters sent by pro-Taliban rebels in a border area of the North West Frontier Province (NWFP) in Pakistan warning girls to wear a veil or keep away from school have had the desired results. 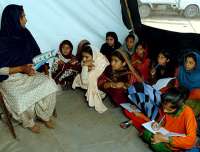 All students at the Government Girls Higher School in Par Hoti, Mardan district, are wearing burqas (an outer garment that covers the entire body, from head to toe) after the school administration was advised that the pupils should be veiled in accordance with the Islamic code.

“Frightened students have started wearing burqas” following a verbal order issued by the principal, confirmed Safia, a student in the seventh grade. “It is a new experience, a new thing for the students who are not used to it,” she told IPS.

“As parents we do not want our children to be attacked,” said Jamil Khan from Mardan whose two daughters are now wearing burqas to school.

The growing Talibanisation of the porous border areas has meant that girls’ education has been under attack as it was under the Taliban regime in neighbouring Afghanistan when women’s education was deemed un-Islamic and women banned from even being seen in public without male escorts.

Pro-Taliban militant groups have used varied means to sabotage women’s education. Apart from the letters sent to schools, warnings have been issued over FM radio by a radical cleric, Maulana Fazlullah.

“Seeking education by women is against the Shariat and the best institute of learning for women is their home,” thundered the 38-year-old cleric in his last radio sermon before he went into hiding on Jul. 5.

Fazlullah’s rabid speeches, mostly against the West, and recently against the anti-polio campaign have derailed the programme in the border areas. Coverage has only been 96 percent despite a vast door-to-door operation involving 60,000 fieldworkers. Pakistan is among four countries, including Afghanistan, India and Nigeria, where the polio virus has not been eradicated.

The cleric is the son-in-law of the influential Tehrik Nifaz-i-Shariah Mohammadi’s chief Maulana Sufi Mohammad. His brother Fazal Ahmad was killed in an air strike on a seminary in Bajaur Agency, FATA, on Oct. 30, 2006, which left a total of 80 people dead. While the Pakistani air force claimed responsibility for the attack on the religious school that was being used as a training camp by militants, there were unconfirmed reports that the missiles were U.S. or NATO from across the border in Afghanistan.

Immensely popular with women particularly, the cleric’s sermons and lectures have a huge listenership. Most families in Imam Dehri and adjoining villages have stopped sending their daughters to school after listening to his preaching.

Fatima, a teacher at a school in Swat, is extremely worried about the situation. “This is terrible!” she said, greatly distressed. “This trend of discouraging girls from education would hammer the last nail in the development of women,” she told IPS by phone.

According to her, the primary school where she taught had about 200 students two months ago. Their numbers had dwindled to 80 since. An estimated 8,000 schoolgirls have dropped out over the past two months in the neighbouring villages of Imam Deri, Koza Banda, Bara Banda, Kabal and Char Bagh.

Pro-Taliban militants are active even in Peshawar, the capital of the NWFP, where anonymous callers have threatened the well known Khyber Medical College authorities of violence on the campus if within three weeks all women students are not wearing burqas.

“We have received several telephone calls, asking us to strictly enforce the burqa, and also, segregate the classroom into all-male and all-female students,” KMC principal Prof. Fazal Ahmad told IPS.

The callers say women students should take a transfer to the Khyber Girls Medical College in Hayatabad Township to complete their medical training in a male free campus.

An official at the province’s biggest University of Peshawar has been receiving similar threats for many months now. The university has about 5,000 female students. Rehmat Kalam, a lecturer, told IPS that about a fifth are covered in the burqa.

NWFP Education Minister Maulana Fazal Ali, who belongs to the Muttahida Majlis-i-Amal, an alliance of religious parties that supports the Taliban, is defensive. “We are trying our best to promote female education. For two years, we have been providing free textbooks and uniforms to girls in schools. It shows our interest in women’s education,” he declared.

He told IPS that the government has ordered the law enforcement agencies to provide security to girls’ school throughout the province.