VANCOUVER, Jul 31 2007 (IPS) - Environmentalists and researchers say that climate change is a significant factor in the pine beetle epidemic that has ravaged forests in the western Canadian provinces of British Columbia (BC) and Alberta. 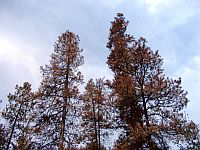 In some areas of the BC interior, almost 80 percent of the lodgepole pines will have been devastated by the beetles within 10 years, resulting in widespread economic consequences, according to resource experts.

“The pine beetle has survived the warmer winters due to global warming. The result is the rapid cut of forests to salvage the wood, which could, within seven or eight years, result in some communities being without a forestry industry which has sustained many regions for decades. The potential economic impact of this climate change issue is massive,” he said.

A temperature of -40 degrees Celsius for a few days is needed in the winters to kill off the beetle adequately.

Ben Parfitt, a resource policy analyst with the BC chapter of the non-profit Canadian Centre for Policy Alternatives, told IPS, “To contextualise the magnitude of the devastation, it is probably the biggest landscape-level change since the ice age.”

“There are forestry disease issues across the continent right now,” he said. “The pine beetle has hit lodgepole pine, but it could spread across the continent to boreal forests as well. This could very well be only the beginning of the implications of climate change for forests in North America and other parts of the world.”

The beetles kill the trees by boring through the bark into the phloem layer on which they feed and in which eggs are laid. Canada’s boreal forests account for nearly one-third of the world’s total forest area.

Proponents of logging in the beetle-infested areas say it reduces the risk of forest fires by removing dead wood, and allowing surviving stands to recover and regrow faster. But Parfitt and others believe it has contributed to the current situation by leaving older trees susceptible to the insect.

“There have also been disease manifestations in Alaskan spruce and other insect outbreaks in other areas of North America where climate change has been a contributing factor,” said Parfitt.

Eric Doherty, a board member of the Vancouver-based Society Promoting Environmental Conservation, told IPS, “Without a doubt, the consumption levels of first world urban centres and transportation policies which contribute to the ecological footprint are a contributing factor in climate change and symptoms of it, such as the pine beetle crisis.”

“We have to deal with the root cause of the problem, which is to reduce [greenhouse gas] emissions. Climate change is underway and we have to adapt to the changes. On the ground, in the forest, it is difficult to deal with this in the short term,” he said. “It has to be a comprehensive and long-term approach by governments.”

Rob Duncan, a spokesperson with the Sierra Club of Canada, agreed that the core issue is climate change.

“When the government found out about the infestation, they developed a management strategy which was about salvaging as much wood as possible by logging it as much as possible for commercial purposes,” he said. “The warmer weather in the winters allowed the beetle to proliferate to a size over 9 million hectares.”

“It was a gold rush mentality which resulted in cutting down what were essentially community futures without thinking about long-term timber supply and basic issues of sustainability and long-term viability,” he told IPS. “It was a short-sighted approach.”

Duncan added, “We need a mind shift to adequately deal with the problem. It is a symptom of climate change which can only be dealt with by radically reducing greenhouse gas emissions. There has been a six percent CO2 increase [in Canada] as a result of the policies to cut the trees down faster. Trees are carbon neutral, but when you cut them down the release is instantaneous.”

Aboriginal communities have also been impacted. The annual cut in BC’s interior has increased by a third, to about 12.73 million logs, according to BC journalist Terry Glavin. This increase, plus the growing beetle infestation, has changed wildlife migration patterns, which has affected traditional hunting.

Over the next five to 10 years, an estimated 250,000 people, both indigenous and non-indigenous, could be directly and indirectly affected if the situation does not change.

Canada’s Globe and Mail paper reported that the federal government is redirecting 74.8 million dollars from its mountain pine beetle fund to help communities in the BC interior diversify their economies and support major transportation infrastructure. The federal government has promised to spend 936 million dollars over a decade to mitigate the impacts of the beetle epidemic, but interior communities have said that the funding has come too late to deal with the problem, which first emerged in the mid-1990s.

In late March, the federal government announced that it would make 23 million dollars available immediately to British Columbia to fight the spread of the pine beetle along the BC-Alberta border.

The combination of global warming and the increased supply of older trees due to improved forest fire prevention methods has increased the potential territory which the beetle could impact.

On Apr. 12, the government of Alberta declared a state of emergency over the mountain pine beetle when the infestation increased from 19,000 trees last year to 3 million this year. The invasion has stretched south to the Kananaskis Country region and the eastern slopes of the Rockies.

Many First Nations peoples in British Columbia traditionally used the wood from lodgepole pine for a variety of purposes, including poles for lodges, homes or buildings. In the spring, they stripped off long ribbons or “noodles” of the inner bark and it was eaten fresh, sometimes with sugar, or stored.

Parts of it were used as a base for many different medicines. It was boiled, mixed with animal fat, and used as a poultice for rheumatic pain and all kinds of aches and soreness in muscles and joints.

Lodgepole pine is now harvested for lumber, plywood, and paneling. It is used to make doors, windows and furniture, as well as railway ties, mine props and fence posts.

(*This story is part of a series of features on sustainable development by IPS and IFEJ – International Federation of Environmental Journalists.)