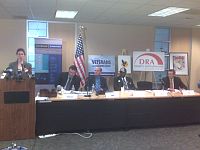 The lawsuit, which was filed by Veterans for Common Sense and Veterans United for Truth, seeks to be a nationwide class action on behalf of an estimated 320,000 to 800,000 post 9/11 vets suffering from post-traumatic stress disorder.

“The VA’s motto, which is taken from Abraham Lincoln’s second address, is to care for him who have borne the battle and for his woman and orphan. Instead of living up to this motto, the VA is abandoning disabled veterans and following a path that will lead to broken lives, homelessness and staggering social costs,” said Melissa Kasnitz, an attorney with Disability Rights Advocates, one of the organisations that prepared the lawsuit.

At issue is what veterans say is a VA bureaucracy that keeps former soldiers from the care they need.

For example, of the 1,400 VA hospitals and clinics scattered across the United States, only 27 have inpatient programmes for PTSD. This despite the fact that an estimated 38 percent of soldiers and 50 percent of National Guard who have served in Iraq or Afghanistan report mental health issues ranging from post-combat stress to brain injuries.

The VA also has a backlog of over 600,000 disability claims, and the average Iraq war veteran who files for disability must wait six months for an answer. If he or she files an appeal, it could take up to three years.

“The Department of Defence went to war in Iraq. They hired hundreds of thousands of extra soldiers from the Guard and Reserve to make the military larger so that they could do the invasion of Iraq,” noted Paul Sullivan, a veteran of the first Gulf War and executive director of Veterans for Common Sense.

The situation is likely to continue to worsen as the war goes on and more active duty soldiers become veterans.

Harvard University professor Linda Bilmes, who has authored the most comprehensive study on the needs of the VA system, estimates veterans will file 214,000 disability claims next year – further straining the system.

It’s a problem that had already caught the eye of a federal judge even before veterans filed suit Monday.

“There are ominous signs that veterans’ cases that may require case-by-case adjudication will soon increase, and probably very sharply,” said federal Appeals Court Judge Paul Michel Jun. 28. “They could swamp our court by year’s end. The Court of Appeals of Veterans Claims just received more filings than in any other two quarter period in its history. The impact on our court…could be catastrophic.”

For its part, the VA refused to answer questions about the lawsuit, but it did release a statement in response to it.

“The Department of Veterans Affairs is committed to meeting the needs of our latest generation of heroes,” the statement reads.

“Through outreach efforts, the VA ensures returning Global War on Terror service members have access to the widely recognized quality health care they have earned, including prosthetics and mental health care. VA has also given priority handling to their monetary disability benefits claims,” it concludes.

But in their lawsuit veterans groups say the VA bureaucracy in Washington has exerted pressure on local officials to deny valid claims or deliberately underrate the severity of disabilities in an effort to save money. At the same time, VA officials have not asked Congress for more money.

Veterans for Common Sense’s Paul Sullivan used to monitor disability claims for the VA. Last year, he resigned in protest.

“In 2005, while working at VA, I briefed senior VA political leaders that VA was in a crisis of a surge of disability claims of Iraq and Afghanistan war veterans,” he said. “I recommended in writing that the VA hire more claims processors to make sure the veterans get their benefits faster instead of facing six month delays or even longer.”

“The VA didn’t do anything to help the veterans. What the VA actually did was several things to lock the doors and block veterans from getting mental health assistance from VA,” Sullivan said.

In their lawsuit, the veterans groups ask the federal courts to force the VA to clear the backlog of disability claims and make sure returning veterans receive immediate medical and psychological help. They also want the judge to force the VA to screen all vets returning from combat to identify those at greatest risk for PTSD and suicide.

An estimated 400,000 veterans sleep homeless on the streets of the United States. The VA estimates 1,000 former servicemembers under its care commit suicide every year.