RIGHTS-IRAN: "Blood Was Everywhere, the Smell of Death"

BERKELEY, United States, Jul 13 2007 (IPS) - Criticism of Iran&#39s judiciary is mounting following the brutal execution of a man who was convicted of adultery more than a decade ago and stoned to death on Jul. 5. Although the head of the judiciary branch, Ayatollah Mahmoud Shahroudi, issued a written order stopping the execution almost a month ago, the judge in the case insisted on stoning Jafar Kiani to death. 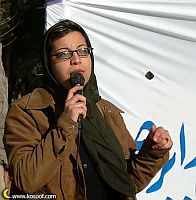 Shadi Sadr, a prominent lawyer and activist who has worked to overturn the convictions of several women sentenced to death. Credit: kosoof.com

Stoning is the prescribed punishment for adultery under Islamic law in Iran. However, in recent years, some judiciary officials have been reluctant to enforce it due to intense domestic and international objections to its barbaric nature. In Sharia (Islamic law), a man is usually buried up to his waist, while a woman is buried up to her neck. Those carrying out the verdict throw stones at the condemned person until they die.

Almost a month ago, "Stop Stoning Forever", a social campaign formed by outspoken women activists, warned the public that Kiani and Mokarrameh Ebrahimi, a 43-year-old mother of three, would be stoned to death in Takistan, a city in Ghazvin province. They launched an internet campaign and contacted judiciary officials to stop the execution.

They were successful in reaching the segment of the judiciary branch that opposed the use of stoning in such cases, convincing Ayatollah Mahmoud Shahroudi to order a halt to the execution.

Since the Iranian government controls all major media such as television, radio and newspapers, the internet is the only communication tool that activists can employ to bypass censorship, filtering and suppression of freedom of speech.

Then, on Jul. 10, Dr. Alireza Jamshidi, the spokesman for the judiciary branch, confirmed that in fact, Jafar Kiani had been executed by stoning five days earlier, although his partner, Mokarrameh Ebrahimi, has still not been executed.

Jamshidi expressed surprise at the decision by a local judge to proceed: "There has been a stoning sentence carried out by a judge in Takistan branch recently, but the sentences were not supposed to be executed in such a manner according to the judiciary branch, and the ban order issued by the head of the judiciary is to ensure appropriate caution by the judges in issuing and executing such sentences."

"But in this case, since the sentence had been confirmed [by the Supreme Court] it was carried out, although the woman&#39s sentence has been stopped," he said.

"The extent to which the ban order can deprive a judge from independence is a long discussion, but a judge can act independently – although with the order of the head of judiciary, it is necessary to exercise more caution in issuing and executing these sentences," he added.

Asieh Amini, a journalist and women&#39s rights activist who went to Aghche-Kands, a small village near Takistan where the stoning took place, told IPS that none of the local people she spoke to were aware that such an incident had occurred.

"From what I have found, Ayatollah Shahroudi just halted the stoning but he did not cancel it. Therefore, the judge was able to legally carry out the sentence under the current laws in Iran," she said.

"The judge, with help from a few policemen, took the prisoner from detention to a very small village, along with some of his colleagues from the judiciary office in Ghazvin province. Although none of the people in that small village were agreeable to the stoning, the judge and his accomplices stoned him to death," Amini said, based on her observations from her trip to the area.

She was able to locate a copy of the judge&#39s report that was written to his superior official. The judge started the execution by throwing the first stone.

"I went there; blood was everywhere, the smell of death. Killing a man by throwing out stones [is] a cold-blooded action. It seems it is a political game and a power struggle among radicals, traditionalists and moderates. I believe Ayatollah Shahroudi is not a fan of execution by stoning but as it is an Islamic law, he cannot oppose the fundamentalists in the judiciary and remains silent against enforcement of such a brutal sentence," she added.

Many other countries and human rights groups have strongly condemned this barbaric punishment. Just a few days ago, Human Rights Watch sent a letter to Ayatollah Shahroudi urging him to eliminate the penalty from Iran&#39s constitution.

"We wrote to Ayatollah Shahroudi for several reasons: First, this cold-blooded killing was carried out by provincial judiciary officials who come under his supervision, at least nominally. Second, he had recently ordered the stay of execution in this case – which the provincial authorities disregarded. Third, he had previously issued the moratorium on executions by stoning," Joe Stork, deputy director of the Middle East and North Africa division at Human Rights Watch, told IPS. "It would be a logical step, following on the moratorium, to remove from the books any regulations recommending or permitting execution by stoning for any offence," he added. "The next step, which we did not spell out in our letter, would be to ban execution by stoning, and affirmatively make it a criminal offence."

Shadi Sadr, a prominent lawyer and leading member of the "Stop Stoning Forever" campaign, says there is clearly a conflict in the differing stances within the judiciary regarding the elimination of stoning laws in the constitution.

"By empowering the radicalism in the state&#39s discourse, some factions of the judiciary branch which support stoning as a part of Islamic laws, and resist its elimination, have become more powerful than the other factions which favour eradicating it from the constitution," Sadr told IPS from Tehran.

"Ayatollah Shahroudi and his supporters in the judiciary do not have legal and political authority to oppose the radical Islamist faction," she added.

Despite international pressure to stop the stoning of Jafar Kiani&#39s partner, Mokarrameh Ebrahimi, Sadr is sceptical that even the nation&#39s top judiciary official can block such sentences anymore, although officials say her case is currently being reviewed.

"Previously, the stoning laws existed, but Ayatollah Shahroudi&#39s political power allowed him to stay an execution order. Unfortunately, now, since the radicals have gained more power in the government, his political will and authority has been greatly undermined."