BELO HORIZONTE, Brazil, Aug 14 2007 (IPS) - The assault on a physical education teacher was the last straw. Three teenagers beat him with sticks, causing a head injury which required 17 stitches. The school closed for three weeks from that day, Apr. 30, 2003. 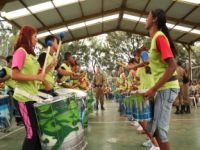 Since that time, heated debates and negotiations with the municipal government have been held, and action has been taken to restore a minimum level of security at the Oswaldo Cruz Municipal School (EMOC) in Belo Horizonte, a city of 2.4 million people and the capital of the southern state of Minas Gerais.

The military police have given classes on homicide prevention, better street lighting has been installed, and a course on how to deal with drug addicts was offered. Repairing a wall that had partially collapsed during flooding had to be carried out with special quick-drying cement, after the newly rebuilt wall was knocked down again several times, at night.

Since then, EMOC has been through a revolution, and has become an oasis of harmony in a neighbourhood that is poor and torn apart by drug trafficking gangs and juvenile delinquents engaged in constant turf wars. The school walls, clean or painted with artistic graffiti, contrast with neighbouring walls scrawled on by vandals.

The transformation was achieved through a large number of non-traditional initiatives, such as courses on drama, drumming, dance, “capoeira” (a cultural expression blending simulated fighting and dance, developed by African slaves), sports and shows. These activities, and the way they have been promoted, have brought peace within the school and to its relations with the neighbourhood.

EMOC adopted several programmes that had proved effective in curbing violence and promoting the development of young people in other parts of the country, like the Open School programme fomented by the government, which opens up schools to the community on weekends for artistic, sporting, crafts and recreational activities.

The local military police are active in two programmes: “Stay Alive,” aimed at preventing crime through cultural mobilisation and vocational training for teenagers and young adults, and “Youth and Police,” which establishes drumming, theatre, graffiti and sports groups involving police officers and students.

The “Youth and Police” programme, guided by AfroReggae, a successful group that has undertaken many cultural actions in the “favelas” (shanty towns largely dominated by drug gangs) of Rio de Janeiro, brought about the conversion of Walace de Souza.

Now 19, he acknowledges he was “plagued with temptations” as a teenager. “Once I carried out seven armed robberies in one day,” he said. He thought that “nothing too bad happens to minors,” as in Brazil the age of criminal responsibility is 18. But he recalls plenty of police beatings, and shows pistol whipping marks on his back.

His worst scar is from a bullet in the leg that he received from the police during a robbery. Souza was able to avoid being confined in a juvenile detention centre, thanks to his mother and a lawyer. He was 15, and for a long time he wanted revenge. “I was determined to kill the first cop I found,” he said. He even bought a revolver for the purpose.

Fortunately, he did not follow in his brother’s footsteps and get a 19-year jail sentence for killing a policeman. Although he did inherit his brother’s nickname “Frango” (chicken) because he too is tall, at 1.80 metres, and skinny, weighing 60 kilograms. He was even thinner before, because of drug use and poor nutrition, he said.

He and his mother live in Villa Ventosa, the favela right next to the school.

In spite of his delinquent lifestyle, he did not drop out of school, because of pressure from his mother. “I didn’t like studying,” he said. But although he stayed in school, he was frequently truant, and he was a trouble-maker there, even stealing in the school building. Until he joined the Youth and Police project last year, which changed him.

Drumming held a powerful attraction for him, but he was reluctant at first because he “didn’t want to mix with the police.” Then one day he stole a cell-phone at school, and the authorities threatened to send him to prison. People from the programme and the head teacher of EMOC defended him, and he felt he had to choose between “the project or prison.”

“Before, I would have money and women for a few days,” after his successful robberies, “but I didn’t feel happy. Now I can be happy, like I always used to be,” he said. And he did not stop at reforming himself: he brought two friends “from drugs to the project,” including his closest partner in crime.

Surprisingly, one of his future plans is to join the military police. “I want to be one of them, to make my friends understand the other side. We didn’t used to see policemen as people with families; we just thought they wanted to beat us up,” he said. With a foot in both camps, de Souza says he believes he can bring them closer together, and also contribute to the police not just beating up poor people “without even talking to them.” His other dream is to study law, for similar reasons.

But when he finishes his secondary education this year, he will not be leaving EMOC just yet. He plans to stay on for two more years, as the school rules allow, to prepare more thoroughly for higher studies and to “stay in the projects.”

De Souza is living proof that personal transformation is possible.

The leading light of the process, EMOC’s head teacher, Luciana Maria de Oliveira, says she believes that the first step towards overcoming violence in schools is “not to pretend that it doesn’t exist,” and to avoid the attitude that “it has nothing to do with me.”

The main factor contributing to the school’s success was “believing in the community, in its ability to organise itself ,” and in its wisdom, however simply expressed, she said. Talking to local residents, fulfilling agreements, sharing responsibility and creating alliances with the public sector, universities and social organisations are also essential, she added.

Previously, EMOC had been “out of touch with reality,” she acknowledged. It was opened in 1972 as a model school on 25,000 square metres of land, with sophisticated installations, a covered stadium, well-equipped laboratories, a theatre, gardens, and selected teachers. It catered to an élite, in complete contrast with the surrounding poverty.

Hostility towards the school increased as the two neighbouring favelas, Villa Ventosa and Morro das Pedras, grew in size, fed by rural migration. Violence exploded with the growth of drug trafficking and the emergence of armed gangs based in the two favelas, which first fought each other, and then among themselves, drawing boundaries along streets and alleyways.

The school was sometimes caught in the crossfire, or itself became a battleground. Violence caused an “exodus” of students in 2002 and 2003, with the student body shrinking from a total of 2,200 to between 1,200 and 1,300, the head teacher said. The school’s recovery in recent years raised student numbers to 1,500 and brought a greater mix of social backgrounds, with a larger proportion of poor students.

Teaching improved. EMOC students, from some of the poorest communities of the city, achieve results comparable to those of schools catering to the middle class, Oliveira said.

As well as promoting community participation and stimulating activities for the students, EMOC’s administrators and teachers used a great deal of creativity. One example is the large walls of the school building which have maps of the city, the state of Minas Gerais and Brazil painted on them, highlighting cultural, ethnic and geographic aspects.

EMOC is not an isolated case of school violence in Brazil, although this school was conceived in a way that was in conflict with the local reality. Studies by the United Nations Educational, Scientific and Cultural Organisation (UNESCO) have documented an alarming situation from the 1990s onwards.

“Violence in schools creates a climate that not only contributes to tense social relations, but also undermines learning,” said Miriam Abramovay, co-author of several UNESCO studies. “Both students and teachers say they are afraid to go to school,” which is reflected in huge levels of absenteeism among teachers, she noted.

UNESCO itself helped to develop the Open School strategy in some cities, and found that violence diminished when local residents were invited onto school premises on weekends for various activities. Today the programme has become general policy in several Brazilian states.

These and other initiatives that bring schools and local communities closer together through artistic, cultural and sporting activities are changing the face of education in Brazil, in response to a reality that has become increasingly violent.