ENVIRONMENT: Carving Up the Melting North

VANCOUVER, Aug 20 2007 (IPS) - As climate change hit a cultural tipping point in 2007, with more and more people expressing concern and awareness of the risks posed by rising greenhouse gases, warming in the Arctic is already altering the landscape in Canada’s north. 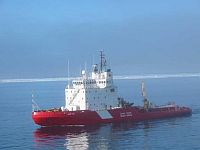 According to experts, its impacts range from eroding the traditional aboriginal way of life to fueling international disputes over new shipping routes and resource exploitation.

So it is not surprising that Russia went and planted a flag on the Arctic sea bed some 4,261 metres deep last week as a gesture of conquest. In the realm of international relations, the move was a minor blip on the radar – but it could be a portent of things to come as nations scramble to grab a piece of the melting north.

Dr. Michael Byers, Canada research chair in global politics and international law at the University of British Columbia and author of the recently published “Intent for a Nation: What is Canada For?”, told IPS, “There are clearly environmental and security challenges tied to climate change in Canada’s north. They range from increased shipping through the Arctic, resource extraction issues, the possibilities of oil and gas development on the bed of the Arctic Ocean. The change in climate is facilitating access to what has long been one of the most inhospitable places on earth.”

“The climate change dimension of the Arctic is terrifying,” he added. “Oil and gas is obviously a factor in contributing to climate change, and now, the change in climate is allowing for possibly more exploration of oil and gas. The irony is not lost here. The last thing we need to do is exploit more of it. Control over that seabed for Canada should be to keep those deposits where they are.”

In the recent past, the Arctic pack ice made regular marine shipping through the long-sought Northwest Passage linking the Atlantic and Pacific Oceans impossible for most of the year. But global warming is now melting much of that ice, meaning that the waterways could become navigable for commercial freighters, and the region’s extensive deposits are more accessible.

Byers said that on a recent trip to visit the Inuit community of Igloolik to discuss international shipping through the Northwest Passage, the deputy mayor of the village expressed concern over the effects an expanded route would have on land and marine mammals and the environment.

The United Nations Convention on the Law of the Sea would play a key role in determining jurisdictional disputes, if there is substance to them. Countries have 10 years to submit complaints after ratifying the international convention. For Canada, this would mean 2013.

Climate change is also opening up new possibilities for mining and drilling in the region. The U.S. Geological Survey estimates that 25 percent of the world’s undiscovered oil and gas is buried beneath the Arctic.

About 50 nations with potential claims to those riches have until May 2009 to make their submissions under the U.N. Convention. Denmark, Russia, the United States, the Nordic countries and Canada have all already asserted jurisdiction over parts of the Arctic.

Environmentalists worry about the impacts of a new oil and gas rush on the region’s already foundering ecosystem.

Keith Ferguson, a staff lawyer with the Sierra Legal Defense Fund, told IPS, “Some of the particular impacts, including the melting of permafrost, will not be as stable and will create all sorts of problems including needs such as infrastructure, added costs, wildlife impact and diminishing forests and tundra,” he said. “Various animals such as the caribou would be affected.”

“The Mackenzie Gas Project from the Northwest Territories is particularly troubling,” he said. “It would be 1,200 kms long and would connect with Alberta. With gas being connected to the oil sands, it would result in an increase in oil sands development and would inevitably increase greenhouse gas emissions.”

A Joint Review Panel has been set up by the National Energy Board and the earliest an approval could be given is late 2008 or early 2009. A landmark government report from the early 1970s known as the Berger Commission Report had recommended that the pipeline not be approved until aboriginal land claims and other issues had been addressed.

The proposed pipeline would be built by a consortium of multinational corporations including Shell, Imperial Oil and Conoco-Phillips.

Matt Gray, a policy analyst on Arctic issues for the Alberta-based Pembina Institute, told IPS, “When thinking about the Arctic, the first thing to consider is that the depth of the biodiversity is shallow compared to sub-tropical areas. Therefore, its susceptibility and sensitivity to changes are more apparent related to climate change.”

“We see it quite clearly with indigenous populations who live closest to the land and are witnesses. They have many traditional stories and have watched the seasons change over many years. This anecdotal evidence is compelling and needs to be weighed along with the scientific evidence,” Gray said.

The impact on aboriginal communities has also created rifts between the leadership and its membership. According to Gray, some have taken a position in favour of more development and resource extraction as a way of securing employment deals on major projects.

“For aboriginal communities, there is an existential question of how they can remain who they want to be, and still participate in the modern economy that fits with their traditional values,” said Gray.

Former Premier of the Yukon, Tony Penikett, told IPS, “For the Inuit, the shrinking ice in the higher Arctic is a huge challenge. Not only is it making it more dangerous for the hunters of the seals, but is compromising the habitat for the polar bears.”

In the Inuit community of Igloolik, for example, the village council was planning to charter an airplane so the people could engage in traditional hunting because they were unable to use the highway.

But Penikett, whose youngest brother runs a small airline in the North, noted that many of the places to land aircraft have also been compromised by melting ice.

“Twenty of the communities in Nunavut are based on harvesting resources from sea ice and by harvesting marine life. With the shrinking icecap, the ice has now retreated to a point further than we have ever had records for,” he said. “It presents challenges for Canada, with the Northwest Passage opening up and sovereignty issues will likely emerge.”

“From the Inuit point of view, these are internal waters,” Penikett added. “The resources that lie under those waters are potentially of huge benefit to them. The share that the federal government and Inuit have agreed to is a huge political issue that has yet to be resolved. The environmental impact is also of major concern to the Inuit as a way of managing the impacts and mitigating the harms to their way of life.”