GUATEMALA CITY, Aug 14 2007 (IPS) - "We had no set punch out time. Sometimes we would work through the night until dawn," said Everilda Yanis, who worked at an export garment factory in Guatemala that closed down in December 2006, leaving her and hundreds of co-workers in the street with no severance pay. 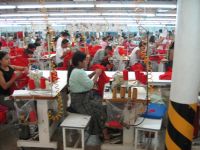 Trade unionists, workers and activists described to IPS the constant violations of labour rights and precarious working conditions in the textile factories in tax-free industrial zones in Guatemala, known as maquiladoras or maquilas.

There are currently 184 textile maquilas in this Central American country, 66 of which belong to South Korean investors. They employ a combined total of 70,000 people, 80 percent of whom are young women, according to a source with the Guatemalan Exporters Association’s (Agexport) Apparel and Textile Industry Commission (Vestex).

Yanis, a petite 33-year-old who had her two children – now nine months and two years old – during the three years she worked at the SIB S.A. company, said her employers did not respect her legal right to breastfeeding breaks. And "the work was very heavy," she added.

Maquiladoras enjoy tax-free status for 10 years under a law designed to foment the export assembly industry. The system enables corporations to cut their costs, including the costs of labour.

Since the plants do not require heavy investment in infrastructure, if a problem arises, or when the 10-year tax-free period is coming to an end, they can merely shut down and reopen in another industrial park with a new name, at no cost whatsoever.

The main complaints against the factories are the long (12 to 14 hour) working days, without breaks; non-payment of wages; the illegal practice of requiring applicants to take a pregnancy test; and violations of social security laws. (The companies deduct employees’ contributions without actually making the mandatory payments into the system).

There are also complaints of maltreatment of workers. "They shout at them, hit them, and pressure them to meet quotas and deadlines and not to claim their rights," Ana María Monzón, with the Centre for Human Rights Legal Action’s (CALDH) women’s rights programme, told IPS.

Monzón, who took part in a study of maquilas carried out in several different industrial parks, said many of the workers, packed into poorly lit and ventilated factories, complained that they were not given water, to keep them from asking for permission to go to the bathroom and thus briefly stop working.

"They kept the bathrooms locked, and we could only go once in the morning and once in the afternoon. They reprimanded us, shouted at us, and demanded that we work harder and faster," Hilda López told IPS.

The 30-year-old worked for four years in CIT Internacional until the factory closed down in August 2006. The company still owes back pay and severance pay to nearly 500 workers.

When she applied for the job, López was forced to take a pregnancy test. Although the practice is illegal under Guatemalan law, the maquilas routinely screen applicants, refusing to hire pregnant women on the assumption that it would affect production.

López also said her employers "discriminated against and humiliated" workers who dared to form a union.

"There is a long list of trade unions that have been crushed in the maquilas. The right to organise is severely compromised in the sector," Marco Vinicio Hernández, defender of workers’ rights in the Procuraduría de los Derechos Humanos (Guatemala’s ombudsman’s office), told IPS.

A source at the Labour Ministry commented to IPS that the ministry has "a special unit for the maquilas, made up of 10 inspectors dedicated solely to that economic activity, who carry out visits periodically or when a conflict or problem arises."

But Hernández said the inspectors’ mandate was weak and that they did not act on complaints in a timely fashion, "because they are more on the side of the employers than the workers."

According to official statistics, 56 percent of Guatemala&#39s population of 12.7 million lives below the poverty line, although non-governmental organisations (NGOs) put the proportion closer to 80 percent.

Unemployment and illiteracy rates are high across the board, but are highest among native women. (Officially, 40 percent of the population is indigenous, although NGOs say the proportion is around 65 percent.)

The maquiladora industry has enabled many indigenous women to get away from domestic labour. In the factories, they earn the national minimum wage of 183 dollars a month, plus a 33 dollar bonus, which according to trade unionists, however, is not always paid.

"Maquilas are important for this country, given the lack of public policies aimed at generating jobs. That explains the tolerance of abuses," said Hernández, who complained about the lack of "adequate enforcement of labour rights."

A CALDH report says labour inspectors usually persuade women not to seek payment of the back pay that they are owed by their former employers, telling them it would require a lengthy, slow process and complicated paperwork.

The inspectors also warn them that their names will be added to "black lists" that circulate among the companies, which will keep them from being hired again by any maquila.

The obstacles to union organising and black lists are not exclusive to Guatemala, as was made clear by representatives of NGOs from El Salvador, Nicaragua and Honduras in a Jul. 18 hearing on the issue in Washington, during the 128th session of the Inter-American Commission on Human Rights (IACHR).

The activists addressing the hearing said inspectors draw up their reports based on interviews with the company owners, and that because the fines are not proportional to the violations of labour rights, the companies prefer simply to pay them rather than make reparations for the damages caused.

Because of the lack of adequate health and sanitary conditions, the women working in the maquilas often suffer from swelling of the feet and legs, hair loss, skin rashes, constant cold and flu symptoms, urinary infections and gastritis.

But employers often deny the women permission to go to the doctor, threatening to dock their wages, in order to meet production targets, several workers told IPS.

One frequent health risk is needles breaking off and poking through the workers’ fingers, said Monzón, who also said there have been cases of stimulants being given to workers, to keep them awake in order to meet production goals.

Some 20 textile factories closed their doors last year, "leaving the workers on the street without an income or right to unemployment coverage," Victoriano Zacarías, secretary-general of the National Workers Federation, told IPS. And 10 have already closed so far this year, he added.

The Labour Ministry source who spoke with IPS said that when a labour rights violation is reported, the complaint is referred to the labour or social security courts, which must determine whether a violation was committed and determine the penalty, if any.

But Zacarías argued that "in the courts, the cards are stacked against the workers, and employers are at an advantage."

In some cases, the factory owners leave the country and the workers are forced to accept lower severance pay or back pay than they are actually owed – if they are paid at all.

"The workers are not machines, they are people," said Hernández, with the ombudsman’s office, who is familiar with the dire poverty suffered by so many of the country’s indigenous people.

Every day at noon, the doors of the maquilas, which have been locked and closely guarded since 7:15 AM, open up and spew out hundreds of workers.

The street turns into a sea of humanity as the women try to find a spot in the shade to eat their lunches. They eat quickly, sitting on the ground. Many take advantage of the short lunch periods to visit the bathroom before returning to a long afternoon in front of their machines, which will end whenever their bosses let them go.