COLOMBO, Aug 23 2007 (IPS) - For Padma, a sociology graduate from a Sri Lankan university, the three-day International Congress on AIDS in Asia and the Pacific (ICAAP) that ended Thursday was nothing short of an enlightening experience in her life. 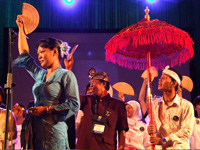 Next ICAAP Set For Bali Credit:

"When I arrived at the conference, I was filled with fear and prejudice against people with HIV and AIDS. But now, I hold a totally different view. Thanks to the large amount of information available to me here, I no longer fear eating with or using toilets that have already been visited by positive people," she explained.

Padma, who declined to give her last name, says she leaves the Aug. 19-23 conference, where she worked as a volunteer with other Asian activists and HIV-positive people for the first time in her life, with a firm decision in her mind. ‘’I am now determined to do something to spotlight HIV among young people here. The conference has made me want to start my own organisation to change the narrow perception among people in Sri Lanka," she told TerraViva.

Padma is not the only one. Experts at the conference, the largest in Sri Lanka, agree that the most significant achievement of the congress has been its being a much-needed public platform to raise awareness about the epidemic in this South Asian country where the trend has been to shrug it off, given the officially reported low rates of HIV prevalence.

Violet Maldeniya, an official at the Education Ministry in charge of counselling in primary schools, said: "I attended as many sessions as I could at ICAAP and I gained a great amount of knowledge that I need to put to practice to protect people here."

Sri Lanka has an HIV prevalence rate of 0.1 percent in a population of 20 million. Up to June 2007, 886 persons had been diagnosed as HIV-positive, official figures say, although estimates of the number of people living with HIV was 4,500 at end-2005.

But experts cautioned that there exists a tinderbox situation, one that points to the risks and challenges ahead.

A telling example lay in the closing comments by Prof. A. H. Sheriffdeen, one of the three co-chairs of ICAAP who told the audience of the difficulty he faced in asking companies to donate 10,000 condoms to congress participants. He attributed the companies&#39 unwillingness to the lack of public awareness of the pandemic.

Adding to what many participants found a letdown were the comments of Healthcare and Nutrition Minister Nimal Siripala de Sila who, in his closing address to ICAAP, declared that the government policy on HIV is to push family values – having one sexual partner – "as the best form of protection".

Other pressing issues for the country, according to experts, include maintaining the state health budget given the expanding national military budget.

The amount of resources put into the military is rationalised as being necessary to face the long drawn-out ethnic conflict here and to provide resources for a grassroots approach to HIV prevention – programmes to boost almost non-existent sex education in schools, psychological and economic support in the form of livelihoods for people living with HIV, and increasing testing facilities for the public.

Still, as Joe Thomas, a leading researcher on the pandemic, pointed out, ICAAP has also jumpstarted Sri Lanka&#39s efforts toward HIV prevention. This is yet another sign of much-needed global progress, the primary role of these large international gatherings.

"ICAAP is a golden opportunity for countries such as Sri Lanka and for the rest of Asia, where the epidemic has reached a stage where it needs to be molded to face the issues in this region and build a road map where donors and Asian countries can cooperate based on the needs on the ground," he said.

According to UNAIDS, the joint UN programme, between 2.8 and 9.8 million people were living with HIV in the Asia-Pacific in 2006.

At the end of the closing ceremonies, the organisers of Sri Lanka&#39s ICAAP turned over an AIDS quilt to signify the start of preparations for the next regional AIDS conference, to be held in September 2009 in Bali, Indonesia.

Dr Zubairi Djoerbane, chair of the Indonesian AIDS Society and head of the steering committee of the 9th ICAAP in Bali, said "Indonesia is ready" with the full support and commitment from the government, political leadership and civil society. The Bali congress, he said, will pick up on thematic issues discussed in Colombo, and make its own contributions. "Of course, there will be no restriction for entry for people living with HIV/AIDS."

(*Terra Viva is an IPS Publication)