Q&A: "In Sierra Leone They Just Cut You, And There&#39s Not Much Problem With That"

FREETOWN, Aug 8 2007 (IPS) - Certain comments resonate long after they are made, and Shirley Yeama Gbujama&#39s reported threat to "sew up the mouths of those preaching against Bondo" is certainly one of them. 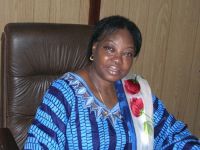 The Sierra Leonean social welfare minister is said to have made the comment just over a decade ago while tourism and culture minister, in response to a campaign against female genital mutilation (FGM). Secret "Bondo" societies initiate girls into womanhood, in part through FGM – a traditional practice that may have a range of harmful side effects.

IPS&#39s Michael J. Carter sat down with Gbujama recently to find out whether she had softened her stance on Bondo and FGM in the intervening ten years.

IPS: Your comment about sewing up the mouths of those opposed to Bondo was seen by some as an endorsement of female circumcision. What are your feelings on the issue now?

Shirley Yeama Gbujama (SG): (Laughs) That&#39s when I was minister of tourism and culture – and culture: Bondo was a part of our culture. When women were molested about the Bondo society (during the campaign), they had a big meeting. They were quite upset about some of the things people were saying in the papers about them. And, mind you, this was the first time people were writing about women&#39s parts in newspapers. We thought that was very degrading, because that had never happened before. I was quite on the side of the women, and I said, "Look, why do they keep writing about us and talking about our private parts? This is not right."

IPS: So your comment was in defense of Bondo culture?

SG: It was not so much a question of Bondo culture as it was in the defense of privacy. That kind of thing was not something we were blabbing about.

IPS: And, what&#39s your opinion of female circumcision now?

SG: Our idea is maybe we&#39re getting to the point where people are through with it. Let us therefore wait until the person can make her own decision to get into society…

But, this big thing about female circumcision – I don&#39t like saying this, but since it has become a world discussion I might as well say it – there are women who were never circumcised as young girls, and now that they&#39re getting older, they are getting so many problems with their whatever (genitals) that they go to doctors and appeal to doctors to cut them off.

We know that there are medical doctors who are doing that. Not just here, other places too. Another thing about female circumcision is that in Sierra Leone, female circumcision is not as bad as it is in other countries of the world. In other countries they scoop you! They don&#39t just cut you. In Sierra Leone they just cut you, and there&#39s not much problem with that. But in other places they do it in such a way that it is dangerous.

I think that really based on the current situation of things, let…the people take their own decision. That&#39s my feeling.

IPS: You mean, establish an age of consent for FGM?

IPS: If an age of consent was established, how would people be brought to observe it?

SG: By sensitisation, of course.

IPS: How do you respond to critics who say FGM should be banned because of its adverse side effects?

IPS: If a female candidate openly opposed female circumcision, how would it affect her chances in the polls? (Sierra Leone holds general elections Saturday.)

SG: It will depend on where (the candidate&#39s constituency is), actually. For example, if it is a constituency up in the provinces it could maybe cause some problems – the reason being not because they care about what happens to women, but because it (FGM) is like a job for some people. And they say, "Hey, if I stop this, what do I do?"

IPS: In other words, candidates would face opposition on economic, rather than traditional grounds?

SG: I think it would be economic pressure, not necessarily cultural.

IPS: What advice would you give to a woman candidate who was opposed to circumcision for campaigning in areas that are deeply traditional, or where people depend on FGM to make a living?

SG: I don&#39t think people have really campaigned against it as such. They&#39ve not included it in their campaigns; they&#39ve been silent about it, really.

IPS: Do you think female parliamentarians should be expected to take the lead in curbing circumcision?

SG: I think it is the business of the women parliamentarians to talk to their constituencies…and get a feel for what they want and then try to see what everybody else is thinking and wanting before they make any noise about it. We shouldn&#39t just say, "Do this because the whole world is saying whatever."

Let us test and see what the women here want to do, and why they think they want to do this. I will tell you that one of the reasons why in those days, as far as culture was concerned, circumcision started in the first place was to prevent promiscuity – and stop the girl child from being bothered.

IPS: Are you disappointed with the small number of female parliamentary candidates running in the upcoming election? (Just 64 of the 566 candidates are women – about 11 percent of the total.)

SG: I expected there to be more because we&#39ve done so much with the 50/50 Group. They&#39ve let the public know the necessity for women to join in the political scene. I was not very pleased that we had such a low percentage.

SG: The 50/50 Group was formed several years ago with the assistance of the British Consulate and some friends in the United States to help women realise the fact that they can participate in politics and have a 50 percent share in the political arena.

IPS: So how can women take a more active role in Sierra Leonean politics and society?

SG: Well of course they must be in parliament, for one. They must be in government, number two. They must be in prominent positions like the National Electoral Commission, which thank God a woman is in charge of (Christiana Thorpe). Girl child education is a must (and) we&#39ve also been strengthening women by way of micro-credit.