VILLAVICENCIO, Colombia, Sep 6 2007 (IPS) - “I took in a 14-year-old boy. I did it for Colombia, for peace. These children need another chance, to be able to live and grow up as decent citizens,” says Maria*, a 29-year-old mother of three. 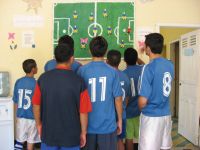 Hers is one of the specially selected and trained families that have taken in demobilised child combatants in Colombia, as part of the Programa de Hogares Tutores or foster homes programme.

More than 2,000 youngsters between the ages of eight and 17 who were recruited by illegal armed groups in this warn-torn country and managed to escape have been given the opportunity to rejoin society through the programme, which got underway in 2003 in the western Colombian city of Armenia and then expanded to other cities like Manizales, Villavicencio, and Bogotá.

The programme has the support of Colombia’s Family Welfare Institute, the European Union, the International Organisation for Migration and non-governmental organisations.

In Villavencio, some 100 children are getting a new start in life in the homes of foster families. Today, 27 of them are at the centre while IPS is visiting. Security and protection are tight.

In the programme’s centres, the youngsters receive schooling, psychological support and an opportunity to play football and engage in other activities. There are also rooms for young mothers with their babies, “because sometimes the girls show up pregnant, or get pregnant during the social reinsertion process,” says psychologist Rodolfo Tovar, the coordinator of Hogares Tutores in Villavicencio.

The city, which is two and a half hours from Bogotá by car and is the gateway to the vast eastern Llanos (plains) region, is known for its wide ethnic diversity and its proximity to conflict zones.

It is near the districts of Ariari and San Vicente del Caguán, which were at the heart of the Switzerland-sized area demilitarised by the government of Andrés Pastrana (1998-2002) for peace talks with the Revolutionary Armed Forces of Colombia (FARC), the main rebel group. The talks collapsed in early 2001 and troops were sent back in to the former safe haven.

Although the civil war rages on, the youngsters taking part in the programme are beginning to recover what they had lost: the warmth of a family and a renewed interest in life. They have traded in their guns for pencils, books and games, and are now busy studying, working, engaging in community service and playing football, like other teenagers.

“I want to study and get training so I can help people and try to repair the damages I caused,” says one youngster in testimony compiled by the Hogares Tutores de Villavicencio.

The United Nations Children’s Fund (UNICEF) reported in 2003 that as many as 14,000 boys and girls between the ages of 15 and 17 were members of the illegal armed groups involved in Colombia’s four-decade armed conflict.

“We know that we are only working with the tip of a huge iceberg, but if you don’t start somewhere, the problem will just get worse,” says Tovar.

The success of the programme lies in “its emphasis on emotional intelligence, which is a person’s ability to understand their own emotions, interpret those of others, and open up channels of communication. That has become the spearhead of our work,” he says.

Youngsters join the leftist guerrillas or rightwing paramilitary militias due to a range of reasons. Some are fleeing physical or sexual abuse at home, while others are trying to escape poverty and find a means of survival. But while the armed groups give them clothing, shoes and food, the children are not aware of the high price they will have to pay, including their own life in many cases, the experts point out.

And if they manage to escape, returning to their own families is impossible, because of the risk of being tracked down by their former comrades in arms.

The middle-class foster homes, which receive support, training, and a small stipend from the state, take in adolescents who are in danger after leaving one of the armed groups and help them in their personal development and social reinsertion process, says Jorge Grisales, a member of the staff at Villavicencio.

“The opportunity to live in a family setting is an experience that allows them to build and repair emotional ties that have been destroyed by the violence and the war,” explains Grisales. “Simply depriving children of the ability to play is painful, because that deprives them of their imagination and fantasies, and stunts their development.”

The youngsters involved in the programme are encouraged to take part in sports. “Play and recreation help build values. Football is their favourite sport, and playing it helps strengthen the kids’ tolerance levels. They get hit and kicked, but don’t hit back because they know it’s just a game,” says phys-ed teacher Luz Stella Rey, another member of the staff.

Jeimy Barrera, a teacher who works in the project in Villavicencio, describes the tutoring that the youngsters receive, to help them perform better in school and develop study habits. They are also given vocational and skills training.

“Based on the kids’ interests and needs, we plan activities in which they themselves build their own knowledge base. The children are divided into six groups, according to their educational level. We have to apply a broad range of learning strategies, in accordance with each child, because they do not all learn with the same method,” says Barrera.

But the first challenge was to strengthen the students’ communication skills. “They tended to withdraw into themselves; they had problems communicating. But they gradually learned, through play-acting, theatre and group activities as simple as preparing a salad, for example.”

Perhaps the most complex aspect of the work falls to psychologist Dora Inés Grosso.

“What we are trying to do is to give these youngsters elements to strengthen their sense of identity, balance their emotions, free themselves of the baggage of a tough life, become part of a family, and break with their uprootedness from family and society as a whole,” she says.

Teolinda, a 52-year-old widow and grandmother of seven, who adopted David, a 17-year-old former guerrilla, says “I am a mother of four. My only son died at the age of 33, and when I adopted my new son, it was as if my first son had been reborn. We immediately hit it off, and even though he calls me ‘aunt’, I feel as if he were my own.”

David “has not caused any problems in our family, and adapted almost immediately. He says he is very happy, and that he hopes to have his own children in our house someday. It feels good to have him with us. His behaviour encourages me to help other children in the future,” she adds.

Yolanda, 48, who has two children and three grandchildren, adopted two teenage boys, ages 18 and 17. “The former has been with me for a year. He is very sensible, studious and obedient. He has had his emotional ups and downs, but he has accepted help with that.”

“The process is just beginning with the other boy,” she says.

The foster mothers confess that at first they were afraid, because they did not know what to expect.

The recovery process also involves a reunion with the youngsters’ biological families, once everyone is ready.

“This is a beautiful programme, but one with very touchy aspects, and we don’t want to endanger the youngsters’ reinsertion process, their lives or those of their foster families,” says Tovar.

IPS was unable to interview or photograph the faces of the demobilised child combatants, for security reasons, and to protect them from stigma.

* The names of the families and youngsters involved in the programme have been changed for their safety.