VANCOUVER, Sep 19 2007 (IPS) - A controversial hydroelectricity expansion project in Quebec has drawn sharp criticism from aboriginal and environmental organisations on both sides of the Canadian-U.S. border. 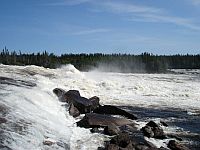 A view of the pristine Rupert River. Credit: FargomeD

Hydro Quebec’s main purpose for diverting the Rupert River in Northern Quebec is for hydro production in order to sell power to the northeastern United States.

U.S. environmental groups such as the Natural Resources Defence Council, International Rivers Network, Friends of the Earth USA, the Sierra Club and Project Laundry List have joined in support of Canadian civil society organisations and three Cree communities who will be directly affected by the project. Many of the same groups were involved in convincing then New York governor Mario Cuomo to back out of a deal with Hydro Quebec in 1992 during discussions for an environmentally sensitive hydro expansion.

The river, once dammed, will form a massive reservoir equivalent in size to 67 percent of the city of Montreal, or half of New York City.

Dr. Brent Blackwelder, president of Friends of the Earth USA, told IPS, “This is another gigantic scheme of Hydro Quebec to divert water with the goal of satisfying U.S. electricity gluttony. We have opposed large dams generally as a solution to global energy problems.”

“This project is a massive scheme to rearrange the river systems in Canada,” he said. “In James Bay, they put this process in motion by trying to dam some of North America’s greatest rivers. Canadians shouldn’t use American electricity demand as an excuse to develop a project that will be an environmental and human rights catastrophe.”

Blackwelder told IPS that the coalition of civil society organisations will be pursuing the channels of decision-making to stop the project from proceeding.

“People in the U.S. are asking basic ethical questions – where is the electricity coming from?” he said. “With these movements in the U.S., there is a capacity to influence markets. These massive projects require long-term contracts, but they may think twice if there’s not going to be a demand for it.”

“We are seeing all sorts of ways in which energy consumption can be dramatically cut. Per capita electricity use in California is 50 percent of the [U.S.] national average even though it is the world’s sixth largest economy,” he added.

Blackwelder said that as pressure builds on states to reduce their energy footprint, there are going to be difficult decisions ahead. More generally, Blackwelder added that any product in the economy should reflect the true ecological cost.

Hydro Quebec could not be reached for comment, but the company has issued a statement refuting the charge that the project is “destroying the Rupert River”.

It says that a series of planned hydraulic structures would permit navigation, fishing and snowmobiling to continue, and that despite a partial diversion which would change the flow of the river, “fish habitat will be preserved and the free movement of fish will be maintained”.

The company also says that the project will ensure a supply of renewable energy for Québec as well as the United States “by optimising output from existing generating stations” and will help to reduce Canada’s greenhouse gas emissions.

But Michel Gauthier, spokesperson for Fondation Rivieres, told IPS, “The issue is that it is a contract with the Cree people. Hydro Quebec did not consult appropriately when discussing the diversion to the Rupert River. They took a few months to study it, but neglected possibilities such as wind power, which was relevant due to the high wind on their land.”

“The Cree leadership have to stand up to Hydro Quebec because the economic benefits do not reflect the ecological consequences,” he said.

Hydro Quebec’s website states that the Cree Nation is participating in all stages of the project, from design to environment to follow-up.

Nicolas Boisclair, a spokesperson with Rupert Reverence, an organisation which advocates for the protection of rivers in northern Quebec, told IPS, “We are promoting the conservation of northern Quebec rivers – we don’t think Hydro Quebec should move ahead with the project. Hydro-Quebec didn’t study alternatives to the project which should have been part of the impact assessment – they didn’t study anything. There was a report written by Siemens which was not revealed during the public approval process by the Tri-Partite Commission.”

On Sep. 14, Project Laundry List joined other civil society organisations for a demonstration in front of Hydro Quebec’s head office in Montreal and displayed a clothesline over 400 feet long with over 100 messages written on used clothing to reflect criticism of the project. The clothesline was meant to symbolise energy efficiency, and solar and wind power.

Daniel Green, scientific advisor from the Quebec chapter of the Sierra Club, stated in a press release, “Fish mercury contamination caused by the flooding of the Rupert basin is a major impact of this project. A whole generation will be condemned to being unable to consume fish safely. We must not accept such a contamination of the Quebec and Cree territory.”

Critics are charging that Hydro Quebec concealed a 4.5-billion-dollar wind energy proposal which was developed by Siemens during the environmental impact assessment hearings in 2006. The project was approved in a split vote.

The project was originally approved by the Grand Council of the Crees as part of a 2002 agreement between the Cree, the government of Quebec and Hydro Quebec, called the Paix des Braves.

Josie Jimiken, Chief of the Nemaska Cree, is supportive of convincing Hydro Quebec to develop wind energy rather that proceed with the diversion of Rupert River.