VANCOUVER, Sep 13 2007 (IPS) - This week, Stephen Lewis, the outspoken former U.N. special envoy for HIV/AIDS in Africa, was invested as Knight Commander of the Most Dignified Order of Moshoeshoe – a knighthood which is Lesotho&#39s highest honour. 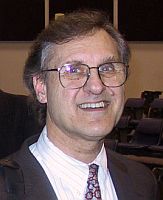 IPS correspondent Am Johal spoke with Lewis by telephone from the Nairobi Serena Hotel about the politics of HIV control strategies, including the philosophy of "harm reduction", which recognises that a certain segment of the population will engage in risky behaviours like casual sex, prostitution and drug use, and seeks to mitigate the consequences rather than punish the behaviour itself.

IPS: First of all, congratulations on the honour that you received yesterday in Lesotho. How do you feel about it and what are some of your reflections now that you have been away from the U.N. position for the last nine months?

SL: I don&#39t think there are any new revelations about the five-and-a-half years that I had that role. There was clear evidence of improvement in terms of anti-retroviral drugs and paediatric drugs for children. There is a continuing focus on prevention which has been increasingly encouraging over time. But, to be honest, there&#39s a huge amount left to be done. There are aspects of that job that continue to prey on the mind. There is too little improvement towards women and their disproportionate risk of violence and sexual violence from men. Addressing this issue continues to be central to dealing with the pandemic.

IPS: What are your thoughts about the International Narcotics Control Board&#39s position on HIV/AIDS and harm reduction? Could you talk about what happened after the Toronto speech where you spoke about Insite, North America&#39s only supervised heroin injection site, last year?

SL: The INCB is a highly problematic organisation which should be challenged on every front. It should be fought at every level and the U.N. agencies should publicly stand up to their agenda, which is ultimately dangerous.

Harm reduction is a viable health intervention. The INCB&#39s position, on the other hand, is abominably indefensible given that they continue to deprecate harm reduction. It is morally problematic what they are doing.

IPS: In which way should the INCB be reformed so that it realistically acknowledges harm reduction and what would be your message to the Stephen Harper government in Canada regarding Insite?

SL: The Harper government should extend the exemption which they&#39re perfectly entitled to give.

In terms of the INCB, as an organisation, it should be open rather than closed. The positions of the various participants should be known and not kept secret. There may be legitimate issues of drug trafficking, but public reports should be subject to public scrutiny. It should be open to public exposure. We&#39re dealing with life and death here.

Drug addicts are not criminals, they are victims. Why should they be subject to the transmission of the virus and be criminalised? It will result, ultimately, in the prevalence of AIDS.

IPS: Is harm reduction being implemented properly in Africa?

SL: Africa is just at the beginning of taking harm reduction measures. There is more injection drug use occurring now. The virus is overwhelmingly transmitted heterosexually. It is being talked of more widely now.

The International Aids Conference in August 2008 in Mexico will give more focus on harm reduction, which is crucial. Harm reduction must be a central theme – it must not be an afterthought. The world has to awaken.

IPS: What is your view of Canadian foreign policy today in places such as Africa and Afghanistan?

SL: Canada&#39s unwillingness to set a timetable for investing 0.7 percent of GDP for foreign aid – this is international delinquency. We, unfortunately, have a militarisation of our foreign policy. The development side of the foreign policy agenda has been undermined.

The capacity of Canada to trade wouldn&#39t be accomplished by gutting development dollars. You shouldn&#39t do one at the expense of the other. We must honour the obligations that the other G8 countries such as Britain, Germany, France and Italy have set.

IPS: You have recently been talking about the need for a women&#39s agency at the UN. Could you explain why this is necessary and what it would accomplish?

SL: One of the most crucial factors at this moment in time before the U.N. General Assembly is to create an agency for women. I feel strongly the need for this at every front. How can you marginalise 52 percent of the population and think realistically about achieving social justice?

An opportunity to create a new agency with an undersecretary-general to do targeted work in countries on the ground is long overdue. Then you could do something about maternal deaths, HIV/AIDS, incredible vulnerability and predisposition to violence, an agency that advocates for change like UNICEF does for children.

There is a tremendous job ahead. There is sexual violence in Eastern Congo; there is a need to compile the litany of early alarms and comments that are being made and to document the horror stories that have etched the landscape of public commentary and how much worse it has to become before we end this war on women.

IPS: You&#39ve said that racism is at the heart of Western ambivalence toward health and human rights in Africa. Have things changed over the years? Are there things to be optimistic about?

SL: One of the things that worries me is that there is still some kind of subterranean racism at work. When I try to describe to people about Rwanda, when 800,000 people get killed in a genocide and then, a few years later, comes Darfur.

We haven&#39t been able to protect the basic human rights of people in Africa, but how come when it happens in the Balkans, NATO responds immediately? And there are ambiguous responses to HIV/AIDS and why, when it comes to this continent, there is no need to engage in an emergency response. This is the equivalent of the Black Death. I don&#39t think people are conscious.

It is embarrassing how appallingly bad the whole thing has become, this issue of promises being dishonoured. The emergence of Gordon Brown in Britain is very significant. This is one of the pivotal moments of hope related to international support for development in Africa. He cares more about poverty and disease than his predecessor and if the Democrats win in the U.S., there could be the possibility of a natural affinity to move on some of these policy matters. It would be a much happier coalition of principle than what it has been a cynical alliance between Blair and Bush.

IPS: What are the deficiencies of the international system today?

We need to make certain individual agencies perform as they should and are intended to be doing. We need to ensure that the tremendous contribution they make is actually felt on the ground.

Multilateralism is not performing as well as it can on the development side. We need to move more forcefully in improving the lot of humankind. We need to keep hammering away at the Millennium Development goals.

I&#39ve always been an apologist for the U.N., and have always believed that it could make a huge and profound difference. But its constant plodding and misdirection can make people cynical, but one of the elements to keep it in check comes from civil society – a role that is desperately needed.

Civil society should not write polite letters and engage in diplomatic games, but should take on institutions directly. It should be insistent and uncompromising. Without civil society, we would not have brought the South African government to acknowledge the HIV/AIDS crisis.

How can we afford to fight wars in Afganistan and Iraq and not invest in development? Our priorities are twisted and are out of whack.