Her dark hair swept up in a traditional headscarf secured under a standard police cap, Shaqofa offers a stark contrast to the many Afghan women who don the restrictive, full-length burqa, a symbol of Taliban rule in the 1990s still observed six years after the regime&#39s fall. 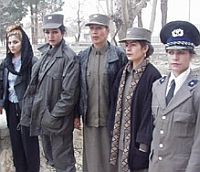 The 18-year-old former shooting instructor, now a police sergeant enrolled in computer classes at the Afghan regional police training centre in the southern province of Kandahar, uses a pseudonym out of fear of Taliban retaliation but still shows up for class every day.

Kandahar is a Taliban hotbed that has borne much of the violence in the war between insurgents and coalition forces.

Neither a Taliban note threatening Shaqofa&#39s death tacked to her family&#39s door, nor the murder two months ago of a training centre instructor, have spurred her to hang up her uniform. But the incidents prompted other staff to quit and illuminated the perils of being a cop in Afghanistan, where insurgents routinely target government workers.

Shaqofa joined the police two years ago out of a desire to investigate crimes committed by the Taliban who "kill the people for no reason," she told IPS.

Under the Law and Order Trust Fund for Afghanistan administered by the United Nations Development Programme, more women are being recruited as police officers, gender units are being established within police headquarters and law-enforcement officers are being sensitised toward issues like domestic violence.

Afghan women first put on police uniforms in the 1960s in a more liberal era.

A sense of pre-Taliban normalcy is returning not only to the law-enforcement arena but also is seeping into other aspects of life – girls wearing school uniforms are a common sight in the streets and women are again taking jobs as teachers, for example.

Yet Afghan society remains highly influenced by bad memories of a regime that essentially erased women from existence. Under the Taliban&#39s overzealous rule, women were forced to cover their faces, outlawed from working, speaking loudly, appearing on television or at public gatherings and even forbidden from wearing nail polish or shoes that made clicking sounds against the pavement – lest these activities should entice men.

Human-rights activists argue today that even some well-educated Afghan men are staunch advocates of the burqa, a sign that changing the mindset of this ultra-conservative culture remains a daunting challenge.

Women like Shaqofa, listed by the interior ministry as one of 150 female police officers in the country, have their work cut out for them but seem primed for the task.

Although her family opposes her profession, arguing that she can earn a higher salary as an international organisation employee, a nurse or a teacher, the young police officer said she has signed a three-year contract and will be jailed if she quits.

Her performance, meanwhile, has drawn plenty of attention.

Described by the United States troops working with her as someone who does not take any attitude from her male classmates, Shaqofa seems unfazed about working in a patriarchal institution.

"She&#39s one of the best shots in Afghanistan," declared one U.S. army officer.

Shaqofa is not alone in her efforts, though.

Her colleague Roya, also using a pseudonym, travels to work every day incognito, wearing traditional clothes that she discards for her uniform once she enters the training center. She simply tells inquisitive Afghans she works for an international company.

The Taliban have not caught on to the fact she works as a police officer but would kill her if they discovered her deception, said Roya, dyed reddish-blonde hair sprouting from under her white headscarf. The job helps the 27-year-old widow to support her three children.

Despite working in a traditionally male bastion, Roya told IPS she stands "shoulder to shoulder with our brothers" and has not experienced any harassment on the job.

Brig. Gen. Nasrullah Zarife, an Afghan officer whose task is to build and train the national police, spoke proudly of the two women from his office at the training center.

Miles from their precarious existence in the troubled south, Roya and Shaqofa&#39s predecessor, Gen. Aziza Nazari, 53, embodies the possibilities open to the two young officers – provided their fellow Afghan security forces can defeat the insurgency in Kandahar and neighbouring provinces.

A 34-year veteran of the police force, Nazari now acts as Afghanistan&#39s passport department chief and is one of the most senior female officers in the country. In an interview in Kabul, she said she has introduced reforms to streamline the passport process and eliminate corruption.

But her success followed years of Taliban repression. Under full burqa cover, Nazari and her female colleagues were tapped by the Taliban to conduct searches of women in the airport for two years but later were confined to their homes along with millions of other women. The general, once whipped by a Taliban member for lifting her mesh-like veil due to illness, always feared the regime would lash out at her children out of anger over her former job as a police officer.

Without a salary and divorced from her husband, she said she was forced to offload her belongings, hawking her uniform for ten dollars and selling a washing-machine that offered a few months of income to support her children.

Nazari put on her uniform again in 2001. Today she freely wears earrings and black patent-leather heels that click – accessories which would have earned her a flogging during the Taliban&#39s heyday.

She is hopeful of the future because under Islam women can stand alongside men, meaning they can join the police and take on other professions, she said.

But Afghan society still faces a long road ahead, according to some international observers.

Because the southern insurgency has consumed most Western attention and resources, "there hasn&#39t been the impact on the day-to-day lives of the average Afghan woman that everyone had hoped for," explained MacDonald, who spends most of her time in the Kandahar city area.

While it is true some girls can attend school and women can work in certain parts of Afghanistan, life in less-enlightened areas denies women the luxury of such "free choices," she continued. She said she faces a tough job convincing families that permitting their daughters to work at the Senlis Council in research, policy and administrative capacities is honourable.

The ubiquitous blue burqa is also a sign of Afghan society&#39s reluctance to soften views. "I&#39ve talked to a lot of women about why that&#39s the case and it is partly because they don&#39t feel secure yet in the post-Taliban regime," she said.

"You know, the Taliban were so cruel and their psychological terror went so deep in the population. You can&#39t just throw that off overnight and say, &#39Ok, we&#39re never going to face that again. There will never be any reprisals for me not wearing a burqa in my city or town.&#39"

Many discussions with "Afghan men who are very open and internationally minded" have revealed to her a mindset adamantly opposed to the "Western position that it should be the women&#39s choice," she explained.

"It&#39s not a conversation they&#39re used to having and it hasn&#39t been pursued with sufficient vigour."

(*Fawzia Sheikh was recently embedded with U.S. troops in Afghanistan)