PINTADAS, Brazil, Oct 5 2007 (IPS) - When the town of Pintadas dared elect a mayor from the leftist Workers Party (PT) in 1996, the retaliation was immediate: the conservative government of the state of Bahia closed the only bank in this small, impoverished town in northeastern Brazil. 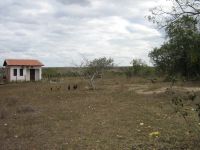 The decision made the local community dependent on the bank in Ipirá, 50 km away.

But thanks to a strong network of community organisations, Pintadas was able to overcome the problem on its own. In just over a year, it set up the Rural Credit Cooperative, with 50 members and 10,000 reals (5,000 dollars) in capital.

Today the bank has nearly 3,000 members, and its capital has grown by a factor of 1,000. Its conventional banking and microfinance services have expanded rapidly, and it now has branches in three nearby towns.

As a member of the Sistema das Cooperativas de Crédito do Brasil (SICOOB), it forms part of a nationwide network of credit unions with more than one million members.

The driving force behind that triumph was Valcyr Almeida Rios, who is now mayor of Pintadas. He succeeded Neusa Cadore, whose election in 1996 prompted the creation of the Rural Credit Cooperative, as well as other achievements.

There has also been a significant improvement in education. Pintadas ranked 34th out of Bahia’s 417 municipalities in the last scholastic achievement tests carried out, said Cadore, who also pointed to progress made in health and the overall quality of life.

Nearly all of the municipality’s 1,600 rural households now have rainwater storage tanks, thanks to the efforts of ASA, an umbrella group that brought together more than 700 non-governmental organisations, trade unions, cooperatives and associations behind the goal of building one million rainwater tanks in Sertão, Brazil’s semi-arid northeast, to provide 8.3 million rural inhabitants with clean water. More than 200,000 tanks have been built so far.

Pintadas, a municipality of 11,000 that boasts of no natural wealth and is plagued by an unfavourable climate, has shown that in the long-term, community development is an important factor for enabling a small town to overcome poverty and a scarcity of raw materials.

In economic terms, the town has little to offer. It is one of the 20 municipalities that collect the least taxes in Bahia; most of the food consumed is brought in from elsewhere; and 3,000 of its residents travel to the distant southern state of São Paulo every year to work in the sugar cane and orange harvests.

Besides the SICOOB Sertão bank, local residents have created the Family Agriculture School to keep young people from leaving and to strengthen family farming, as well as the Agribusiness Cooperative, which provides cattle farmers with financing and a local slaughterhouse.

A total of 11 associations and cooperatives have made up the Pintadas Network since 1999, including groups of women, young people, bee-keepers, farmers, church workers and others.

Some of the organisations arose from specific struggles, like the fight of 16 small farming families who recovered their land with the support of the surrounding community and a self-managed agricultural project, in the mid-1980s and early 1990s.

The origins of the strong local movement lie in the Catholic Church’s ecclesiastic base communities, whose activities intensified after the arrival of church workers from the southern state of Santa Catarina in the 1980s.

Cadore, a nurse and social activist, formed part of a group of 32 people with ties to the Catholic Church in Santa Catarina who decided to carry out a mission in different parts of Bahia, starting in 1984. The commitment they made was for two years, but Cadore ended up settling down in Pintadas.

Her 13 years of activism with local communities and associations and her strong leadership qualities led to her nomination as a candidate and election as mayor in 1996, when the social movement decided it was necessary to expand its struggles to the field of politics, in order to convert its initiatives into public policies, said Cadore.

During her administration, it was local residents themselves who determined in public debates what issues took priority. Water was seen as the most pressing need, and the result was the building of rainwater tanks at virtually every rural household and farm. On their own initiative, people also built tanks in town, to replace the salty-tasting piped water, at least for drinking and cooking.

Another top priority set by the community was to build small dams to create ponds for farmers to store water for crop irrigation.

Because it has no river that runs year-round, the municipality has had to take the fullest possible advantage of the scarce rainfall.

In Pintadas, "the city government is an ally of the social movement," said Mayor Rios, who like Cadore belongs to the Workers Party (PT), which has been the governing party in Brazil since 2003.

And that experience will continue regardless of who heads the city government, because the social movement is independent and has a number of strong leaders, he said. "More than 100 people have already headed up one of the components of the movement," the mayor pointed out.

The municipality’s experience was noticed elsewhere. It has drawn visitors and attention from other parts of Brazil, and last year, Cadore was elected to the state legislature by 2,860 voters in Pintadas – over half of the local electorate – as well as more than 32,000 from neighbouring districts.

Cadore said her aim is to expand the reach of Pintadas’ experience and forge links with other movements, at the state level.

But Pintadas is unique. Catholic missionaries and the Church’s ecclesiastic base communities, inspired by liberation theology, were active around the country, but failed to achieve the level of community organisation and social mobilisation seen in this town.

Liberation theology, a social justice-oriented current that emerged in Latin America in the late 1960s, stresses a &#39&#39preferential option for the poor,&#39&#39 criticises the existence of widespread poverty, and denounces unjust social structures.

In the northeast, Brazil’s poorest region, there are other successful, but less well-known, experiences in community organising. However, Pintadas has stood out for its strong "social fabric based on associations," broad network of community leaders, and "long-term political vision and proposal for social transformation," according to Professor Carlos Milani at the Federal University of Bahia.

The professor has included Pintadas in his studies on social capital and local development, pointing to the collective, anti-establishment character of the social movement.

But even before she and her colleagues arrived, Pintadas "was already different; it had a community spirit and a strong sense of collective effort," said Cadore.

The Church’s "respect for the social movement’s autonomy" and the small size of the town, where everyone knew each other and were always ready to lend a hand, helped consolidate the strong local community organisation, she said.

The relative isolation of the town, which is located at the end of a 48-km unpaved road, was another factor, said Rios.

Thais Corral, founder and coordinator of the Human Development Network and CEMINA (Communication, Education and Information on Gender), two non-governmental organisations that have supported the progress in Pintadas, said the emergence of numerous local leaders, especially in the Women’s Association, was another element of success.

"My experience in different social projects has shown that there is a stronger collective spirit and sense of cooperation when women with an active voice are in the majority," she said.

Along with Daniele Cesano, an Italian expert on renewable energy, Corral heads the Pintadas Solar Project, which is experimenting with technologies to help farms in semi-arid areas like the northeast adapt to climate change, through sustainable irrigation techniques, in order to promote local food security.

Pintadas was chosen for the project’s pilot phase because of its strong social organisation and irrigation infrastructure, as it had already built more than 60 small dams and irrigation ponds, Corral explained.

The pilot project is encouraging the use of renewable energy, like solar power, to pump water from the ponds to gardens and fields watered by drip irrigation, the most efficient method of irrigating.

But although community organisation is "an important asset," it cannot by itself ensure the future of a community, if local residents rest on their laurels, isolate themselves, and fail to face up to new challenges of "social, technological and economic sustainability," warned Corral.