BURMA: UN Getting Nowhere With the Generals

BANGKOK, Oct 2 2007 (IPS) - Few foreigners are as qualified to talk about the mind and the manner of Burma’s dictatorship as Razali Ismail, a Malaysian diplomat who served five years as special United Nations envoy charged with facilitating political reform in that military-ruled country. 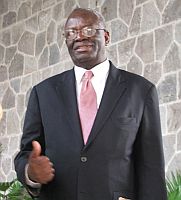 &#39&#39When you are talking to the military chief there it is not a dialogue that you indulge in. In fact, you cannot expect to have a dialogue with him,’’ Razali, who has traded diplomacy for a career in business, told IPS during a telephone interview from Kuala Lumpur.

Attempts by foreign envoys to discuss domestic politics with Senior Gen. Than Shwe, Burma’s strongman, are treated with a measure of contempt, as if it is ‘’an internal issue,’’ he added. ‘’In his mind, there is a sense of intrusiveness.’’

What is more, the years he spent engaged with the Burmese junta confirmed that progress marches at a retarded pace. ‘’It is a very slow process dealing with an authoritarian government,’’ he said, reflecting on what he achieved since he began his U.N. mission in 2000.

It was only in late 2002 that the country’s pro-democracy leader Aung San Suu Kyi was released from years of house arrest following talks Razali had with the regime. But the Nobel Peace laureate’s emancipation was brief. She was forced back into another spell of house arrest in May 2003, which has still not been lifted. And Razali quit his post in early 2006 after he failed to persuade the junta to see reason – which came on top of him being denied an entry visa to Burma for two years.

Razali’s experience with Than Shwe and with one of the dictator’s former deputies, Gen. Khin Nyunt, offers some clues as to what the Burmese public and the international community can expect from the latest encounter between the world body and the reclusive, 73-year-old military chief.

On Tuesday, Ibrahim Gambari, the U.N.’s special envoy to Burma, met with Than Shwe in the South-east Asian nation’s remote capital, Naypyidaw. It came three days after Gambari flew in on an emergency mission to convey the international community’s concern about the recent ‘’repression of peaceful protests’’ in Burma and to resume a ‘’constructive dialogue’’ to prod the regime towards political reform and democracy. The outcome of this meeting remains unknown.

A similar cloak of secrecy was thrown over the meetings Gambari had on Sunday. The most significant was his encounter with Suu Kyi, a discussion that lasted for over an hour at a government-run guesthouse in Rangoon, the commercial capital. The Nigerian diplomat also had meetings with lower ranking government officials, such as Lt. Gen. Thein Sein, the acting prime minister, Brig. Gen. Kyaw San, the information minister, and Maj. Gen. Khin Aung Myint, the culture minister.

This week’s visit to Burma, which the junta renamed Myanmar, was the third Gambari has made since mid-2006. After the two previous missions – in May and November – Gambari sought refuge in vague diplomatic lingo to convey what he had achieved. When describing his second visit, he said that there had been ‘’hard bargaining’’ between the two sides on some troubling political issues.

But last year’s missions did not come against a backdrop of bloodshed and brutality on the streets of Burma’s main cities. Nor did it come in the wake of international outrage at the U.N. headquarters and some capitals of the world to the harsh measures the junta had pursued to crackdown a peaceful protests of Buddhist monks and civilians against new economic hardships and the junta’s oppressive rule.

In fact, as Gambari arrived in Burma on Saturday, there was speculation among Burma analysts that he would be given an opportunity to meet the senior generals who matter. The absence of such an encounter on Sunday and Monday only heightened such concern, since a failure by the U.N. envoy to talk to the leading generals would have led to a simple conclusion – a mission with no meaning.

The troika that holds the levers of power in the junta includes Gen. Maung Aye and Lt. Gen. Soe Win. Than Shwe who earned his stripes as a specialist at psychological warfare and is also known for his ruthless shoot-to-kill measures, deployed against the separatist Karen ethnic rebels in the east of the country, became the head of the junta in 1992.

In all, there have been six U.N. envoys with different mandates who have sought change in Burma. And hardly any of them have enjoyed the liberty to work in a free environment to pursue their various missions. The Orwellian conditions the regime subjects U.N. envoys to was best conveyed during the last visit Paulo Sergio Pinheiro made to Burma in November 2003. The Brazilian diplomat discovered that the room assigned him to interview human rights victims was bugged.

It is a record that has given rise to a view about how Than Shwe sees the world body and its special envoys. ‘’Than Shwe treats meetings with U.N. envoys like a war. That is a result of his military thinking,’’ says Win Min, a Burmese academic at Chiang Mai University, in northern Thailand. ‘’He first sends lower ranking ministers as he would send front-line troops to find out what the U.N. wants and what questions he may have to answer.’’

This week’s crucial meeting with Gambari had another element, too, Win Min explained in an IPS interview. ‘’It would have been shameful for him to meet Gambari, since Than Shwe does not want any outsider or foreigner to know what is going on in the country and to offer solutions.’’

And as long as the junta remains in power, the U.N. and the international community will have little alternative other than working with the generals, says Razali, the former U.N. envoy. ‘’The bottom line is that you have to work with the military. You cannot get rid of them.’’