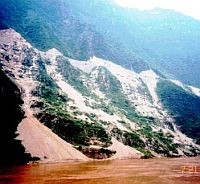 Breaking with a propaganda tradition of extolling the virtues of the dam, which it likes to present as one of the symbols of China’s rising power, last month Beijing admitted publicly to "hidden dangers" in the massive project.

The dam, which has created a 640 km-long reservoir on the Yangtze River, suffers from landslides, silting and erosion that could accumulate into an environmental disaster if not quickly fixed, according to experts.

While this view has been upheld by environmentalists and independent observers for years, Beijing had suppressed domestic opposition to the project, focusing instead on the dam’s capacity to control seasonal flooding and generate hydroelectric power. The Three Gorges dam is now producing enough electricity each year to replace 50 million tonnes of polluting coal and reduce China’s carbon emissions by 100m tonnes.

So opponents of the project were duly stunned by Beijing’s surprise admission to the adverse aspects of the dam last month. "If no preventive measures are taken, the project could lead to a catastrophe,&#39&#39 the official Xinhua News Agency quoted Chinese experts speaking at a conference called by the government to discuss the dam issue.

On Friday, in a new development, Xinhua indicated that as many as four million people could be relocated.

About the same time that experts were convening to examine the negative ecological impacts of the project, the government of Chongqing metropolis in the reservoir region was putting forward a blueprint, which outlines the mass relocation of 1.17 million people from the dam area.

The original relocation plans as disclosed by the &#3921st Century Economic Herald&#39 newspaper, call for the reduction of the reservoir population in order to "ecologically safeguard the dam area and create an important ecological barrier inside the Yangtze River basin".

The resettlement, which local leaders want to complete by 2020, would bring the total number of people displaced by the Three Gorges project to 5.3 million.

Instead of moving people uphill to new land, the municipality of Chongqing – a large urban sprawl on the upper reaches of the Yangtze River, is planning to absorb uprooted farmers into the city proper and transform them into city dwellers. By giving up their land rights, relocated farmers would be allowed to apply for social security of urban dwellers.

"This second relocation programme will integrate the transfer of rural labour force into the urbanisation and industrialisation process," Miu Wei, an official with Chongqing Development and Reform Commission was quoted by the paper as saying.

Beijing approved the relocation plan this week, lauding it as a step of "great importance to the environmental protection of the Three Gorges reservoir area".

But the attempt to present the new resettlement as part of an accelerated urbanisation process has made some environmental observers doubt the motives behind it.

"Urbanisation has received the public’s nod and everybody sees it as part of China’s modernisation. Uprooting from the land and forcible relocation however, could be socially very sensitive," said one Chinese expert who spoke on condition of anonymity, fearing reprisals in the tense weeks ahead of the Party Congress beginning Oct. 15.

"Behind this environmental and public safety rationale, there could be more land grabbing by Party officials in the works, by government officials and their cronies who want to ‘develop’ rural areas as tourist destinations, for their personal benefit, nothing to do with protecting the environment."

Curiously, the disclosure of the relocation plans come shortly after Chongqing municipality and Chengdu, the adjacent capital of Sichuan province, were awarded the much coveted inside the country status of a "new special experimental zone", which allows them to benefit from central funds and preferential policies. Perhaps even more importantly in a country with scarce land resources like China, it gives them a freer hand in making decisions on land management and urban planning.

As conversion of farming land has been strictly regulated in recent years and Beijing has cracked down on violators, only few controlled locations like the special zones have been legally allowed greater freedom to expand.

Chengdu has already taken tentative steps in this direction. It has recently relocated 33,000 peasants from their land, clearing it to build what it has termed a new "green" commercial-residential town, The East Mountain.

Chongqing too, needs more land and funds as it struggles to tackle the legacy of the Three Gorges Dam. The city is by some reckonings the biggest urban sprawl in the world, customarily described in China as a "village within the city".

Since its elevation as China’s fourth centrally-administered municipality ten years ago, it has grown phenomenally, sucking in millions of rural poor at a rate of two million migrants a year.

The urbanisation rate though, remains low and local leaders fret about the rise of slums. Chongqing has a population of 31 million, 80 percent of whom still live in rural areas. The social makeup is also reflected in the grossly uneven GDP growth. While some of Chongqing’s 40 county-level administrative districts are booming, others are merely scraping by.

The construction of the controversial dam, which began in 1993, involved a much criticised at home and abroad forced relocation of 1.3 million people. This first batch of farmers, whose homes were inundated by the rising waters of the dam, was resettled locally by moving them to new land at a higher altitude or promising them jobs in the vicinity of the dam.

But the relocation process was beset with problems and marred by corruption and fraud scandals. In their latest report from January 2007 Chinese auditors said they believed some 37 million US dollars has been embezzled from funds earmarked for resettling residents displaced by the project.

Displaced people soon found out there was little unused land in the dam area and only few of the promised jobs materialised as more and more of the region’s obsolete industrial enterprises were declared defunct.

"In the end, more than one million people ended up roaming the mountain and hillside regions, which we now see has created a serious damage on the environment and caused grave soil erosion," the 21st Century Economic Herald quoted Zhang Xueliang, a member of the Chinese People’s Political Consultative Conference in Chongqing, as telling the Chongqing meeting.

"There has never been a proper assessment of the first resettlement, the total cost to people and the economy," says Ryder. "Without honest appraisal of Three Gorges resettlement to date, local officials are in the dark recommending this second move, and will likely provoke more conflict and social unrest."

(*This story is part of a series of features on sustainable development by IPS-Inter Press Service and IFEJ-International Federation of Environmental Journalists.)