SAN DIEGO, California, Oct 4 2007 (IPS) - The scent of portobello mushrooms wafts through the air as two of the three co-owners of Roots prep for their morning customers. 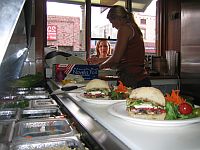 A customer waits for her food at the organic Roots restaurant. Credit: Enrique Gili

Heather Weightman and Jaime Reed recently set up shop in the hippie neighbourhood of Ocean Beach, San Diego. The community serves as a test laboratory for progressive culture in California. And the latest concept to emerge is a take-out restaurant specialising in vegetarian meals made from fresh, locally grown produce.

At 27 square metres, Roots is a tiny eatery with a big message, one of the few likely to have a web site with a mission statement: "Being community focused, cultivating peace, activism, social responsibility and sustainable practices."

Five percent of the business&#39s profits are also donated to humanitarian and environmental organisations.

The co-owners all walk or commute via bicycles, and expect that most of their customers live within walking distance. Eating light has a whole new connotation for them. It&#39s food that&#39s less travelled that really matters.

Studies indicate that in general, food is traveling farther afield, taking the local farmer out of the equation. In the United States, fresh produce often travels 2,400 kilometres from farm to plate – about 25 percent further than 1980 – according to the Worldwatch Institute.

A practicing vegetarian, Weightman boomeranged from the East Coast after working on a family farm in Pennsylvania for three years. Opening an eatery was second nature for Weightman, who&#39s putting into practice her professional background as a registered dietician with a master&#39s degree in public health. "Working on a farm gave the missing piece of my food background," she told IPS.

Ideals aside, they have more on their agenda than tossing a few salads. Amid E. coli food scares and the obesity epidemic, people are paying more attention to how food is grown and produced. Tapping into the trend of supporting local food movements is one way to make a difference – and run a successful business.

"We&#39re trying to keep things as close to the community as possible and we&#39re seeing a lot of benefits from that," said co-owner Jaime Reed.

The area&#39s longstanding tradition of supporting local farmers and organic produce makes all the difference to Roots. The community supports a weekly farmer&#39s market and a food cooperative. Residents make the connection between wellness and farmers who embrace sustainable practices. Plus they support the idea of preserving open space throughout the region.

While the definition of sustainable agriculture is somewhat fuzzy, basic components include satisfying human needs, and making the most efficient use of natural resources without degrading the land.

With the exception of a few stock items, Roots relies on produce sourced directly from farmers living within a few hours driving distance in surrounding San Diego, Riverside and Orange Counties. The high concentration of farms makes this possible. San Diego is the sixth largest city in the country and has the highest percentage of organic farms in the United States – the vestige of a longstanding farming tradition that predates the advent of the tourism and bio-tech industries in the region.

San Diego&#39s Mediterranean-like climate makes it an ideal place to grow agricultural crops and livestock products. More than 2.6 million people live in San Diego County, and more than 6,000 farmers call it home and make their living on 6,565 small family farms, 65 percent of which are nine or fewer acres in size, according to data from the San Diego Farm Bureau.

The high cost of water (more than 600 dollars/acre foot) and land make farming here expensive and encourage growers to raise products with a high dollar value per acre.

The aptly named Robert Farmer of Moceri Produce relishes his job connecting farmers with chefs and providing a platform for locally grown fruits and vegetables. "I&#39m trying to make it easy for everybody," he said.

A founding member of the Tierra Miguel Foundation, a community supported farm, he&#39s spent the last spent 12 years refining the process of getting fresh produce into the hands of chefs as quickly as possible.

Farmer credits the publication of Mark Pollan&#39s widely-acclaimed book "The Omnivore&#39s Dilemma" in 2006 for changing diners&#39 perceptions about how food is procured and produced. The book has sparked a grassroots taste bud revolution, he contends, causing a chain reaction. Chefs are seeking out local farmers in order to create distinct regional cuisines. The upscale organic supermarket chain Whole Foods has opened its aisles to regional small-scale farmers. People are asking questions, he says.

In response to increased consumer interest, Farmer created the Locals Only programme in July, which ships boxes of produce straight to buyers in San Diego, Orange and Los Angeles Counties. Roughly 80 percent of the farmers he represents use organic practices.

As an advocate of sustainable farming practices, he believes the benefits are both commercial and pragmatic. Using less synthetic chemicals saves farmers money in the long run and certified organic crops receive top prices at market, he asserts. Other farmers fail to see the wisdom of living in close proximity to fields regularly sprayed with potentially harmful chemicals.

According to food analyst Gail Feenstra of the University of California at Davis-based Centre for Sustainable Agriculture, building an alternative food distribution network is essential for the survival of small- and mid-sized farmers.

The statistics are grim. Farms have been in the decline since the 1950s. Food is produced and packaged in such a manner that farmers receive an increasingly smaller percentage of the consumer&#39s dollar. Secondly, agricultural conglomerates control an ever larger segment of the market. Supermarkets, for example, carry more than 30,000 products, but typically, half of the items come from just 10 multinational corporations.

Current farm economics have encouraged "making food as cheap as possible for the most number of people, [and] we&#39re beginning to see the cost of that now terms of health, taste and the environment," Feenstra said.

In response to consumers&#39 concerns, a nascent alternative food distribution network is emerging in California supported by farmers, food activists and entrepreneurs. Local is the new organic.

(*This story is part of a series of features on sustainable development by IPS and IFEJ – International Federation of Environmental Journalists.)