BANGKOK, Oct 30 2007 (IPS) - As public health experts in South-east Asia come to grips with one of the worst outbreaks of dengue fever in years, they discern a disturbing pattern about the profile of patients who have died from the virus vectored by the aedes aegypti mosquito. 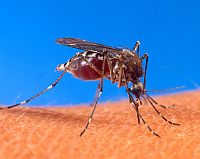 Indonesia, the region’s largest country and one that had a particularly bad year, offers a stark reminder of what the medical community is grappling with. ‘’Nearly 20 percent of the fatalities in Indonesia this year were adults,’’ says Dr. Chusak Prasittisuk, coordinator for communicable disease control at the South and East Asia office of the World Health Organisation (WHO). ‘’This is worrying, because it means the country has inadequate expertise to handle dengue haemorrhagic fever among adults.’’

Other countries that have been hit by record numbers of dengue cases this year are also showing a similar trend, said Chusak during a telephone interview from the WHO’s regional office in New Delhi. ‘’We have noticed this in Singapore, Thailand and Myanmar (or Burma).’’

Consequently, the medical community cannot view dengue fever as one that only affects children, which has traditionally been the case. ‘’Earlier the emphasis was to train paediatricians to deal with dengue since it was seen as a childhood disease,’’ adds Chusak. ‘’But now we have to shift our focus and concentrate on training the large medical community.’’

Cambodia, one of the region’s poorest countries, has not escaped the current spread of dengue fever either. The health authorities report nearly 38,500 cases and nearly 390 deaths, which is double the number of both categories for the country last year. And its regional neighbours, Malaysia and Thailand, have also reported tens of thousands of cases, in addition to 85 deaths, in Malaysia, and 67 deaths, in Thailand.

In fact, the unconfirmed estimates for the region this year places it on par with the worst year recorded for dengue fever in South-east Asia in nearly two decades. So far, with two more months left for 2007, there have been 321,500 cases of dengue and 1,860 deaths due to the virus.

Signs of a rise in dengue cases were apparent when health authorities surveyed the region in July, well after the year’s monsoon rains had begun. And the numbers in Singapore, the affluent city-state known for that the disease had reached epidemic levels.

At the time, Vietnam had recorded 24,255 cases during the first half of the year, in addition to 27 deaths from dengue, while Indonesia had accounted for 68,000 reported cases and 748 deaths by the end of June.

Yet there is little mystery as to why this virus has spread despite the region mounting a range of prevention campaigns, among which are efforts to educate the public about how to combat the Aedes aegypti mosquito. ‘’This is largely the result of unplanned urbanisation,’’ says Chusak. ‘’Dengue is an ecological disease created by humans.’’

‘’Nearly 80 to 90 percent of the breeding areas for the dengue mosquito are man made,’’ he adds. Among these are water stagnating in public areas due to poor drainage systems; water collecting in empty cans disposed on the streets; water in flower vases, pots and earthen jars; and water that collects in toilets.

As if that was bad enough, the region is also learning that its economic growth has, unwittingly, laid the foundation for dengue to change from being a largely urban disease to one that has spread to semi-urban and rural areas. This is the result of people moving in large numbers across the rural and urban divide for work.

In 2006, the WHO’s Western Pacific regional office warned that rural health systems in the region are facing a daunting challenge to deal with a disease that was increasingly becoming a ‘’disease of the poor in rural areas.’’

To that has been added another worrying factor – global warming and climate change – that could trigger a higher number of dengue cases in the future. Such a prospect was driven home by a new study of the world’s environment published last week by the United Nations Environment Programme (UNEP).

‘’Continued warming is expected to cause shifts in the geographic range (lattitude and altitude) and seasonality of certain infectious diseases, including vector-borne infections such as malaria and dengue fever,’’ revealed the 570-page fourth ‘Global Environment Outlook’.

‘’Because of increasing temperatures, mosquitoes are able to survive longer,’’ Surendra Shrestha, regional director for UNEP’s Asia-Pacific office, told IPS. ‘’Vector-borne diseases will move up in a few places and become increasingly widespread.’’

The region will also have to endure changes in the rainfall pattern due to climate change, ‘’which is already here,’’ added Shrestha. ‘’The eastern corners of Asia are receiving more rain now than parts in central Asia.’’

The concern about the spread of dengue in South-east Asia is understandable, since the region has recorded all four strains of the virus that is transmitted by the bite of the carrier mosquito. The virus, which causes pain in the joints, high fever, rash and nausea often requires hospital care, including regular testing of the patient’s blood. In severe cases, the patient suffers from internal bleeding, described as dengue haemorrhagic fever, which can be fatal.