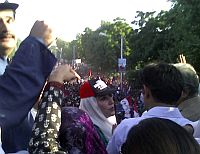 Benazir Bhutto riding through Karachi in a truck full of her supporters Credit: Beena Sarwar/IPS

The National Reconciliation Ordinance (NRO), promulgated on Oct. 5 by Musharraf a day before presidential elections, gives Bhutto immunity against corruption charges brought against her after she was ousted from power in 1996. In exchange, her Pakistan People’s Party (PPP) lent the presidential election legitimacy by abstaining from the vote. The rest of the opposition boycotted the proceedings in protest at Musharraf’s nomination as President while still army chief.

The NRO cleared the way for Bhutto’s return to Pakistan without being arrested under the various corruption charges facing her since she was ousted from power in 1996 (she points out that none of these charges have been proved in court). The NRO also absolves absconding bureaucrats and political workers accused of corruption or criminal activities.

Public opinion is divided between acceptance of the NRO as a pragmatic way forward in the democratisation process, and disgust at what Supreme Court lawyer Zahid F. Ebrahim terms an &#39&#39unseemly bribe&#39&#39 and a ‘’white-washing’’ of corruption in order to usher in a nominal democracy that suits the United States in its ‘war on terror’ and allowing Musharraf to stay on as President.

A last-minute phone call from Washington reportedly clinched the understanding, but speculations about it have been rife particularly since the political crisis that engulfed the country after Musharraf ‘suspended’ Chief Justice Iftikhar Chowdhry in March. This triggered off lawyers’ demonstrations demanding Chowdhry’s reinstatement and quickly built up momentum that had Musharraf on the back foot.

The protests continued for four months and government’s attempts to muzzle the media, through police attacks and hastily introduced legislation backfired.

After the Supreme Court reinstated him in July, Chowdhry began taking up the cases of the ‘disappeared’. The independent Human Rights Commission of Pakistan has filed 150 such cases. As many as three thousand or more activists of various persuasions are missing, many arrested in the name of the ‘war on terror’.

The return of the world’s first Muslim woman head of government is also shadowed by the situation in Pakistan’s north-west tribal areas bordering Afghanistan. Under intense pressure by Washington, Islamabad continues its aggressive military approach to deal with ‘talibanisation’. The army’s recent bombardment of these border areas has resulted in an exodus of villagers seeking safety -and in an increase in militancy.

"The ethics of revenge in the tribal area means that for each civilian who is killed there, there will be ten family members wanting to take revenge against the Pakistan army," notes Imran Khan, the former cricket hero turned politician who heads his Tehreek-e-Insaaf (Movement for Justice) political party. "If there’s no military solution in Iraq, there’s no military solution in Pakistan."

Khan is among those who disdain Benazir Bhutto’s ‘political compromise’ with the army. But there is jubilation among PPP workers at their leader’s impending return, and bus- and truck-loads are heading to Karachi from all over the country to receive her.

With its slogan of ‘Roti, Kapra, Makan’ (Bread, Cloth, Housing), the PPP has always appealed to the poor. "But the Benazir that her party workers are streaming on foot, on bicycle, and on buses to greet, is not the same," observes lawyer Ebrahim. Talking with IPS, he added, "She is still seen as a symbol of the fight against tyranny, but how does that translate when she is power? Will the state invest in health, in education? Will she cut back on the ongoing privatisation and retrenchment of public sector employees? She raises the slogans but has not touched on any of these essential issues."

Even so, hundreds of billboards and hoardings have cropped up, particularly in the area around Bhutto’s fortified, palatial Karachi residence. Despite the city administration’s attempts to get these sponsored banners removed -the police refused, citing preoccupation with security arrangements – the city remains virtually plastered over with images of Bhutto’s smiling face, head duly covered with a ‘dupatta’ – the scarf that women in this region traditionally don over ‘shalwar suits’ (long tunics and baggy trousers) – and a portrait of her late father Zulfiqar Ali Bhutto.

Benazir never covered her head before her return to Pakistan and electoral politics in 1986 during Gen. Zia’s time. The gesture was seen as a nod to Pakistan’s conservative religious forces that oppose a woman head of state. &#39&#39She did the biggest disservice to the women of Pakistan, by donning the dupatta,&#39&#39 observes cardiologist and prominent citizen Dr M. Sharif.

A demurely covered head symbolises the pure woman across South Asia. The Harvard (Radcliffe) and Oxford-educated Bhutto admitted in a recent television interview that not having to handle a dupatta is more "convenient".

She was flung into politics in 1977 when the army dictator Gen. Zia-ul-Haq deposed her father. Two years later, Zia hanged Bhutto on trumped up murder charges, crushing political opposition with massive arrests, torture, floggings and executions. In her autobiography ‘Daughter of the East’ (Hamish Hamilton, 1989), Benazir recounts the hardships she faced during this time under house arrest and solitary confinement, until Zia allowed her to leave the country in 1984.

Washington had by then enlisted Pakistan as a front-line state in the war against the Soviets in next-door Afghanistan and unconditionally supported the Pakistan army and its new unofficial foot-soldiers, the Mujahideen -who have since morphed into the Taliban.

Zia finally allowed Benazir Bhutto to return in 1986 and participate in politics under his ‘controlled democracy’. However, her return this time is very different from the widespread euphoria she generated in 1986 when she challenged the dictator Zia. This time she returns having entered into a deal with the military chief who has held sway for almost a decade.

Zia died in a mysterious mid-air explosion along with the U.S. ambassador Arnold Rafael in August 1988. Elections, three months later, ushered Bhutto into power with a slim majority and forced to compromise on issues like finance, military and foreign policy. Between 1988 and 1999, Bhutto’s PPP government alternated in power with Zia’s protégé Nawaz Sharif and his Pakistan Muslim League (PML). Both were elected and deposed from power twice in this period.

In November 1999, Musharraf took over power and slapped criminal charges carrying capital punishment on Sharif. Shortly afterwards, in a deal brokered by the Saudi monarch at the request of his father, Nawaz Sharif agreed to exchange his prison cell for exile in Saudi Arabia and desist from politics for ten years.

Sharif was unceremoniously bundled back to Saudi Arabia hours after landing in Islamabad on Sep. 10, in an attempt to reenter Pakistan politics. Opinion was then divided between indignation at denying him a citizen’s inalienable right to return and the view that he had brought this ignominy upon himself by entering into this agreement in the first place.

Although the government is ostensibly allowing Bhutto to return, Musharraf requested her to delay her arrival – she refused – and warned her that she may be the target of a suicide attack. Bhutto has scoffed off such warnings with, "I do not believe that any true Muslim would attack me because I am a woman and Islam forbids attacks against women. Secondly Islam forbids suicide."

She has nevertheless taken the precaution of ordering armored vehicles for herself and her arrival is expected to take place amidst tight security. Schools have been ordered closed because of expected traffic chaos from her supporters streaming into the city in the tens of thousands.

Her arrival may yet receive a damper if the Supreme Court upholds the petitions it is currently reviewing against the constitutionality of the NRO. Musharraf too may receive a setback if the court upholds other petitions challenging his nomination as president while still holding army office. However, this may push the country into a worse political crisis, particularly since Musharraf has promised to doff his army uniform ‘soon’.

"If Benazir lands in Pakistan safely, it will be the most important political development in Pakistan in the last eight years," Asad Sayeed, an economist at the Karachi-based think tank Collective for Social Science Research, told IPS. "It will open up political space for representative rule, with civilians taking over at least some space from the military. It may not be enough right now, but there will at least be some transition."