SAN FRANCISCO, Oct 19 2007 (IPS) - U.S. Army Specialist James Eggemeyer injured himself before he even set foot in Iraq, jumping out of a C-130 gunship during training at Fort Bragg, North Carolina. 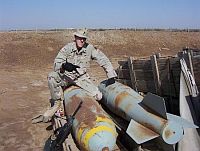 “I jumped out and the jumpmaster who was holding that line that was wrapped around my arm had to cut the line because I was pretty much being dragged behind the airplane,” the 25-year-old Florida native told IPS as he drove a donated truck through the streets of his hometown of Port Saint Lucie, a two-hour drive north of Miami, Florida.

“I hit the side of the plane with my Kevlar,” he added. “My parachute was twisted up like a cigarette roll and I hit real hard and my ankle and my knee and my back and my shoulder (got hurt). I tore my rotator cuff. I feel like a 50-year-old man.”

After the incident, military doctors prescribed Eggemeyer painkillers: the opiate Vocodin, the anti-depressant Percoset, and the steroid hydrocortisone.

Then, in April 2003, they sent him to Iraq. For the next year, he drove a Humvee, running supply convoys to U.S. soldiers stationed all around the country.

His experience in Iraq was rough. His convoys were attacked twice. His worst day occurred early on, when the military truck in front of his Humvee hit a civilian vehicle. Eggemeyer says he slammed on the brakes to avoid adding his vehicle to the pile-up. Then he got out and loaded an entire family of dead Iraqis onto a U.S. helicopter, including a little girl.

After that, Eggemeyer says his condition worsened. The longer he stayed in Iraq, the worse his body felt. He also started to take more of the opiates and the steroids the military had given him. The more he took them, the more he needed to dull the pain.

But violence wasn’t the only thing Eggemeyer had to deal with while deployed overseas. While Eggemeyer was in Iraq, he filed for divorce. His mother had called to tell him his wife was cheating on him with a man in a local hotel. Then Eggemeyer checked his bank account and found 7,000 dollars was missing.

So for the duration of Eggemeyer’s time in Iraq, James’s parents took custody of his son, Justin, who had been born just two months before his deployment.

Returning to Fort Bragg in April 2004, James was quickly discharged from the military. His experience in Iraq had changed his disposition. He started fighting with his captain, and was given “dishonourable discharge under honourable conditions”, which allowed him to use services from Veterans Administration but denied him access to college tuition assistance or vocational training.

When his parents moved to Miami with Justin, James Eggemeyer opted to stay on in his hometown of Port Saint Lucie on Florida’s central coast, where he had secured part-time work buffing, waxing and shampooing cars at Kare-Pro Car Wash.

Located right outside the gates of the exclusive PGA Country Club and down the street from the private Legacy Golf & Tennis Club, Kare-Pro had a decidedly upscale clientele.

It did not go well. Eggemeyer said his main problem was that the manual labour he engaged in at Kare-Pro was aggravating his training injury. After a dispute with the manager over whether he would get Memorial Day off, Eggemeyer quit.

By December 2006, when James Eggemeyer filed a disability claim with the Veterans Administration, he had already joined the ranks of the United States’s burgeoning population of homeless veterans, and was living out of his girlfriend’s Ford Explorer. So when the VA responded with a letter to his old address requesting that he come in for a physical examination, he missed the appointment.

Eggemeyer pawned everything he could: his girlfriend’s diamond ring, his guitar, his X-Box video game system, and his television. Then he went to get help, from Tony Reese, a Veterans Services representative working for Martin County, Florida.

Reese let Eggemeyer use his office as his address and made sure that James showed up at all his appointments. He checked that all of James’s documents were in order and used the VA computer system to ensure his claim was on the right bureaucrat’s desk at the regional office in Saint Petersburg.

But even with that, the process dragged on.

“We were just waiting for the VA,” Reese said. “I really don’t know how the VA is processing these Operation Iraqi Freedom and Operation Enduring Freedom (Afghanistan) claims. Supposedly they’re supposed to be separated and moving quicker but, you know, it doesn’t seem like it to any veteran who files a claim.”

So Reese tried to raise money from private organisations – just enough to keep Eggemeyer afloat until his claim was settled.

In June, he convinced the William J Peterman Foundation for Disabled War Veterans to donate enough money to put James up in a cheap hotel for the month, with both Reese and the foundation believing Eggemeyer would surely be receiving a disability cheque by month’s end.

All the VA needed to do was have a claims adjuster stamp a decision on his file, and since James was homeless, his file should theoretically be at the top of the stack.

But after 30 days passed, the VA still hadn’t rendered a decision. The Peterman Foundation’s money ran out and James Eggemeyer was back on the street.

Then, on Jul. 21, Eggemeyer crashed his girlfriend’s 1999 Ford Explorer – which was also his home – into a utility pole. Eggemeyer blamed the intoxicating effects of VA prescribed pain killers for his accident. The police report noted Eggemeyer wasn’t drunk and he was only cited for “careless driving”.

“I was on so many painkillers that I thought I was getting in the turning lane, but it was actually the curb,” Eggemeyer said. “I wrecked it and totaled it and then I didn’t have anywhere to live.”

Reese sprung into action again. He got the local Veterans Council, a membership organisation of groups like the American Legion and the Veterans of Foreign Wars, to cough up enough money for James to buy a used truck to live in.

July passed, August passed, and James was still waiting, unemployed, on a decision from the Veterans Administration.

“It’s a representative case,” Reese told IPS. “The more you stay in contact with the VA, the more you stay on top of your claim, the more the chance of your claim getting processed as it should be. But sometimes weeks and months just pass by and before you know it the claim is sitting God knows where. (James Eggemeyer), he’s just your typical guy returning.”

Indeed, the VA’s own statistics show that Specialist James Eggemeyer received what could best be described as “standard treatment”.

Since the start of the Iraq war, the backlog of unanswered disability claims has grown from 325,000 to more than 600,000. On average, a veteran must wait almost six months to have a claim heard. If a veteran loses and appeals a case, it usually takes at about three years.

Veterans groups maintain that the backlog amounts to official negligence. Since the launch of the Iraq war more than four years ago, the number of people charged with reviewing and approving veterans’ disability claims has actually dropped. According to the American Federation of Government Employees, the VA employed 1,392 Veterans Service Representatives in June 2007 compared to 1,516 in January 2003.

But across the country, people like Tony Reese continue to take their jobs seriously. Through the months of waiting, Reese continually called the claims adjudicators he knew at the rating board in St. Petersburg. He reminded them of what they already knew from the forms in front of them: that Specialist James Eggemeyer had served his country in Iraq but he had sustained both physical and mental injuries in the field of battle and was now homeless and suicidal.

On Sep. 5, a claims official at the Department of Veterans Affairs told Reese and Eggemeyer that the first cheque would come within the week. Eggemeyer had been given a 100-percent disability rating retroactive to the date he made his first claim.

As a result, James now has an apartment and will soon be reunited with his son.