WASHINGTON, Oct 9 2007 (IPS) - In a major rebuff to human rights and government accountability activists, the U.S. Supreme Court Tuesday declined to take up the case of a German citizen who was allegedly abducted, detained and tortured by the Central Intelligence Agency (CIA) as part of the CIA’s “extraordinary rendition” programme. 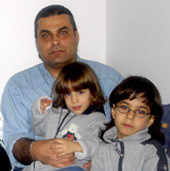 Khaled El-Masri with two of his children. Credit: Joy Garnett

By declining to hear the appeal, the Court effectively let stand a decision by a federal court judge in 2006 to dismiss a civil lawsuit brought against former CIA director George Tenet, among others, by Khaled el-Masri, on the grounds that a trial risked exposing “state secrets”.

“This is a sad day not only for Khaled El-Masri, but for all Americans who care about the rule of law and our nation’s reputation in the world,” said Ben Wizner, a staff attorney for the American Civil Liberties Union (ACLU) which brought the case on El-Masri’s behalf.

“By denying justice to an innocent victim of this country’s anti-terror policies, the Court has provided the government with complete immunity for its shameful human rights and due process violations,” he added, noting that the administration of President George W. Bush has asserted state secrecy to avoid disclosing information regarding key aspects of its “global war on terror”, including the use of torture, in several other cases as well.

“When the government hides behind the state secrets doctrine to evade accountability for abuses, and the courts accept that justification despite clear evidence of wrongdoing, it undermines the whole idea of enforcement of human rights,” agreed Elisa Massimino, the Washington director of Human Rights First.

“Congress has let the CIA programme of rendition and secret detention go on long enough. It is time to bring this practice under control,” she added.

Extraordinary renditions, in which terrorist suspects have been seized by the CIA and transported to other countries for interrogation, were first authorised by President Bill Clinton but became a much more frequent practice during President George W. Bush’s “global war on terror.”

El-Masri, whose case has clearly irritated U.S.-German relations and contributed to European concern about the CIA’s extraordinary rendition programme, was kidnapped while on vacation in Macedonia on New Year’s Eve 2003, according to lengthy investigation by the New York Times published in 2005.

The father of six young children, he was flown to Afghanistan where he was held and interrogated at a secret prison called the “salt pit” in Kabul for some four months. According to his own account, he was constantly shackled and sometimes drugged and beaten during his confinement until his CIA handlers became convinced that he was the victim of mistaken identity.

El-Masri, who is of Lebanese descent, has said he was also interrogated three times by a German national during his detention in Afghanistan.

In May, he was flown to Albania, driven to a remote mountain area and abandoned by the side of a road.

The CIA has declined all comment on the case, but German Chancellor Angela Merkel last year asserted that U.S. officials had admitted to her government that El-Masri had been seized by mistake. In June 2006, a report by the Council of Europe concluded that El-Masri’s account of his ordeal was substantially accurate.

Last January, German prosecutors issued arrest warrants for 13 people, including suspected CIA operatives and contract pilots, in connection with El-Masri’s abduction and flight to Afghanistan. They are all believed to have been part of the “rendition team” that used the Spanish island of Majorca as a logistical base for renditions in Europe.

In December 2005, El-Masri filed a lawsuit against Tenet, who was CIA director at the time of his detention, several private companies believed to have been involved in his abduction, and their employees, to recover damages for violating his due process rights and international laws that ban arbitrary detention and cruel and inhuman treatment.

In May 2006, however, a federal judge dismissed the suit under the so-called “state secrets privilege” which permits governments to argue that permitting sensitive cases to be heard could harm national security.

The judge in the case, T. S. Ellis III, said he deferred to the administration’s invocation of the privilege but added, “If El-Masri’s allegations are true or essentially true, then all fair-minded people must …agree that El-Masri has suffered injuries as a result of our country’s mistake and deserves a remedy.”

Last March, a three-judge appeals court upheld Ellis’ decision, although it, too, indicated some qualms. Writing for the court, Judge Robert King noted that the case “pits the judiciary’s search for truth against the executive’s duty to maintain the nation’s security…We recognise the gravity of our conclusions that El-Masri must be denied a judicial forum for his complaint.”

El-Masri’s hopes for a judicial remedy, however, ended Tuesday when the Supreme Court denied his petition to hear the case without comment, a decision that was characterised by White House spokeswoman Dana Perino as “a good thing”.

“Today’s decision by the Supreme Court not to hear Mr. El-Masri’s case is profoundly disappointing,” said Sharon Bradford Franklin, senior counsel of the Constitution Project, which filed a “friend-of-the-court” brief urging the Court to review the case and the application of the “state secrets privilege”.

“The government’s treatment of Mr. El-Masri has been appalling and the executive branch should not be permitted to hide its mistakes behind the so-called state secrets privilege,” she said.

Franklin called on Congress to “immediately take up legislation to reform the privilege and clarify that it does not authorise unchecked power to disregard individual rights.”

The ACLU has argued that the privilege was originally designed to merely exclude sensitive kinds of evidence from being exposed in court cases, but that the administration has used it increasingly as a way to dismiss entire cases, thus barring any effective judicial review of its more controversial tactics, including the wire-tapping of U.S. citizens.

“Today’s decision will not end the debate over the government’s use of the ‘state secrets’ privilege to avoid judicial scrutiny for illegal actions carried out in the name of fighting terrorism,” said Steven Shapiro, the ACLU’s legal director.

“In a nation committed to the rule of law, the government’s unlawful activity should be exposed, not hidden behind a ‘state secrets’ designation,” he added.