KANNERI, BRT Hills Sanctuary, Karnataka, Nov 20 2007 (IPS) - The magical trill of the Nilgiri Whistling Thrush deep in the jungles of this remote southern Indian wildlife sanctuary is no comfort to its nearly 2,000 Soliga aboriginal tribal families. 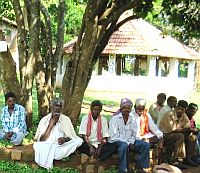 The implementation in 2006 of the Wildlife (Protection) Amendment Act 2002 now bans adviasis (aboriginal tribes) from gathering non-timber forest produce (NTFP) such as honey, wild herbs, mosses, lichen and fruits for commercial purposes from parks and sanctuaries.

Till the ban, Soligas had usufruct rights to collect NTFP and sell them to their own cooperative LAMPs (Large-scale Adivasi Multipurpose Society) which in turn would auction them to the highest bidder, generally traders who in turn sell the produce to various industries.

Being a cooperative, LAMPS functioned on a non-profit basis.

Approximately 12,500 (of a total population of 30,000) Soliga had subsisted inside BRT (short for Biligiri Rangana Betta), growing a little food and relying heavily on NTFP sales for daily sustenance.

Their close link with the forests has given them a deep knowledge of the ecology and of the forests of BRT. There have been no instances reported of poaching or harming wildlife by Soliga inside the sanctuary.

But without the small income from selling to LAMPS, Soliga families are now facing starvation and distress.

Active contributors to LAMPS, like Chikkananjegowda of the Kanneri advasi settlement inside the sanctuary, are now unemployed.

Chikkananjegowda’s wife, 40-year-old Veeramma found work as a daily-wage labourer in a coffee estate nearby, but that too, dried up.

”Family members are now commuting long distances daily in search of seasonal and menial jobs,” say a group of ten elders from the Soliga community to members of the Pune-based non-government organisation (NGO) ‘Kalpavriksh’, visiting BRT to study the situation.

‘ We have to spend half of the daily wage of Indian Rupees 60 ( 1.5 US dollar) to travel by bus to find work, and we have no food to carry or eat.‘

In another hut alongside Veeramma’s, 42-year-old Gowramma says her family manages one meal a day by traveling 25 km daily to cut cane.

“The DFO (divisional forest officer), threatens us if we walk through the forests, so we have to spend money taking a bus.”

Earlier she and her husband earned Rs. 5,000-6000 ( approximately 125 dollars) per year from NTFP sales to LAMPS, but now the four self-help groups serving LAMPS in the area have no work.

The problem has now soured relations between Soliga and the forest staff from one of goodwill into one of mutual distrust.

In March 2007, the forest department arrested several Soliga for alleged arson. The Soligas, in turn, say a few misguided youth may have been responsible, but are upset at the DFO’s treatment of the issue.

Magarikhete Gowda, 60, has now filed a police report for physical abuse against the DFO. R. Raju. ” Up until now we had no problem with the forest department,” says Veeramma, ” but this year has been different.”

Raju denies using excessive force against the tribals, saying “95 percent of them are innocent, but frustrated at the ban of collection of NTFP’’.

Letters to the government, begun in 2004 and continuing today, argue whether LAMPS, from which the Soliga depend on their daily living, can be defined as ‘commercial extraction’, which is now banned under the Wildlife Act.

The State Wildlife Board, which heard the forest department’s request in August 2007 to allow some extraction of NTFP for Soliga since it was a livelihood sytem and not a commercial process, has passed the matter on to the central government in New Delhi for a decision.

The Indian government’s ban, done in a bid to protect the country’s fast-depleting wildlife, has also affected tribals inside protected areas in other regions such as adjacent Kerala state.

But the plight of this primitive tribe, deeply connected to the forests, is the most dire reported so far.

Meanwhile, the Soliga Association has been pleading with the State’s forest secretary, Governor and other authorities. In desperation, the organisation has organised a ‘sit-in’ protest on Nov. 26 outside the office of the divisional commissioner, the highest ranking official in the district.

“‘I think we need jobs”, says C. Madegowda, the first Soliga postgraduate from a school set up 25 years ago by a medical doctor, H. Sudarshan, now internationally acclaimed for his work amongst the tribals.

Madegowda says the majority drop out after school because of lack of finances to study further and the forest department does not have a system of recruiting trained and educated local youth. ” Some youth have recently been given some ‘weeding’ work”, comments Madegowda.

Dr. Sudarshan says India’s rural welfare measure, the National Rural Employment Guarantee (NREG) scheme, wherein one member of each rural family is guaranteed at least 100 days of paid labour, has not been considered for BRT and the tribals.

” This scheme is absolutely necessary to the tribals, more so because NTFP collection has been banned,” feels Sudarshan. “The administration could easily work out 100 days of employment through desilting tanks (reservoirs), rainwater harvesting and watershed construction,” he says.

Meanwhile, Kalpavriksh and a Bangalore-based scientific organisation called the Ashoka Trust for Research in Ecology and the Environment (ATREE) are working with Sudharshan’s organisation to help the Soliga.

Kalpavriksh is campaigning with central and State authorities to bring attention to the Soliga’s distress.

Sudarshan is offering resources including trained youth to the forest department for forest conservation, in a bid to undertake collaborative and participatory management of BRT.

” I am fully convinced that conservation and livelihood can go together. Give me the chance to show it, ” to doctor said.