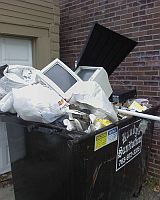 Discarded computer monitors in Minneapolis, Minnesota, where the city has a free pick-up programme. Credit: Bdunnette

“It’s an astonishing number that will send millions of pounds of lead to landfills or overseas,” said Barbara Kyle, national coordinator of the Electronics TakeBack Coalition.

Non-digital TVs contain up to eight pounds of lead, which is a potent neurotoxin. While new digital flat screen TVs don’t have lead, they do contain mercury, another neurotoxin.

Changes in rules and regulations in recent years to the Resource Conservation and Recovery Act, administered by the U.S. Environmental Protection Agency, have created an “appalling system that makes it easy to dump e-waste on the developing world”, she said.

The act states that exports of hazardous waste can only go forward after the receiving country has officially agreed to accept it.

However, loopholes and exemptions mean hardly any e-waste is considered hazardous and is therefore legal for export without informing recipient countries. Just recently, changes by the Bush administration allows computer monitors and TVs that all contain mercury and lead to be exported as long as they are going for recycling, Kyle says.

Despite being the largest producer of e-waste, the U.S. has refused to sign the international Basel Convention to prevent the transfer of hazardous waste from developed to developing countries.

The Coalition launched a Take-Back-My-TV campaign this week to pressure television manufacturers to create voluntary TV recycling programmes. It urges the public to contact the heads of major TV manufacturers to take responsibility for the proper disposal of products they make.

Electronics giant Sony has already agreed and will now take back old TVs at 75 retail stores free of charge.

“We’d like all major manufacturers and retailers to join Sony on this,” she said.

Kyle notes that companies will need to responsibly recycle e-waste and not dump it overseas or use prison labour in the U.S. Prisoners do not have standard U.S. labour rights or protections.

According to the Coalition, more than 400 million electronic devices are thrown away each year and just 12 percent are recycled. The rest – some 2.3 million tonnes – is shipped overseas, dumped into landfills or incinerated.

Despite the high value of some of this waste and its known toxicity, the main reason it isn’t recycled is that the United States does not have any national e-waste legislation. Only nine states have e-waste recycling programmes, and five of those just started this year. Since it is very expensive and dangerous for states to handle e-waste at traditional landfills, many more states are expected to shift the burden to the manufacturers in the coming year.

Minnesota’s new e-waste regulations state that manufacturers must process e-waste in proportion to their annual sales by weight. In the first years, the target is 60 percent and in later years 80 percent, Kyle says, adding, “This is a model I hope other states will adopt.”

Ironically, the same companies that resist national and state e-waste rules in the U.S. have to comply with Europe’s Waste Electrical and Electronic Equipment Directive (WEEE Directive). It sets collection, recycling and recovery targets for all types of electrical goods and makes manufacturers responsible for disposal.

Considered the best e-waste programme in the world, it’s not working all that well, according to a new report released Nov. 15 in Bonn, Germany.

Only about 25 percent of Europe’s medium-sized household appliances and 40 percent of larger appliances are collected for salvage and recycling. Small appliances, with a few exceptions, are close to zero percent collection, says the study done for the European Commission by a United Nations University-led consortium.

“People simply aren’t aware of the dangers and throw their used goods away,” Kuehr told IPS from Bonn.

Kuehr laughed out loud when told that North Americans assume Europeans are much more environmentally aware.

“European consumers are not much different than North Americans,” he said.

The WEEE Directive only targets manufacturers – not the public, retailers or governments, said lead author Jaco Huisman of the UNU in an interview.

The low collection rates suit manufacturers quite well because they have much less to recycle. No one is really responsible for collection, said Huisman.

“Manufacturers say they can’t make people bring back their e-waste and in truth, manufacturers don’t really want it back because there are costs associated with recycling,” he said.

To get around this problem, collection targets are needed. The study suggests possible long-term collection rate targets of around 60 percent for small appliances like MP3 players and hairdryers, as well as for medium-sized audio equipment, microwaves and televisions and 75 percent for large appliances like refrigerators and washing machines.

If implemented, these targets would lead to a reported European harvest of roughly 5.3 million tonnes of e-waste by 2011, up from 2.2 million tonnes today, says Kuehr.

There are major environmental benefits in collecting 75 percent of old refrigerators which contain chlorofluorocarbons (CFCs) – a chemical that eats away the ozone layer and is a highly potent greenhouse gas.

“Achieving that target would save the equivalent of roughly 34 million tonnes of CO2 from entering the atmosphere,” Kuehr said.

Europe also has the problem of dumping e-waste on developing countries, despite the practice being illegal. Recent investigations have found cargo containers going to Africa supposedly full of used but still functional computers and monitors that in fact were 90 percent e-waste.

“Used cars are being shipped to other countries crammed with e-waste – no one is inspecting this,” said Kuehr.

Europe needs to modify the WEEE Directive to focus on both enforcement and collection, the report suggests. And major efforts are needed to increase public awareness of the need to properly recycle e-waste, he said.

“If manufacturers can figure out how to get us to buy their products, I think they could find ways to get us to bring them back,” said Kyle.