ANSE A PITRES, Haiti, Nov 20 2007 (IPS) - At 11 a.m., five hours after the start of the market day on the southern border of Haiti and the Dominican Republic, the driver of the bright red Haitian truck named "God of Justice" swung down the back gate and started unloading the full load of 60-kg burlap bags of coffee. 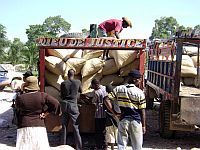 Men unload coffee at a market on the border between Haiti and the Dominican Republic. Credit: Alexandra Pope

The beans, grown in the nearby high mountains of Chotte, were not part of the fair trade organic coffee project known as "Haitian Bleu", which brings a premium price. They had been sold to Dominicans and would soon lose their nationality, blended in and sold under the label of "Cafe Santo Domingo".

Men hefted the bags onto their heads and pushed their way across the narrow concrete footbridge. There they waited alongside the stacked bags of U.S. rice for the guards to open the gate in the high chain-link fence at the entry to the market in the Dominican Republic.

Although the road signs say "international market", the market is now completely on the Dominican side of the border. Several years ago, with economic assistance from the European Union, the town of Pedernales built a covered concrete market area, which the town maintains and rents out at nominal cost to both Haitians and Dominican merchants on Mondays and Fridays. On the Haitian side, locals have built uncovered stick structures which mimic the architecture on the Dominican side.

Before the deployment of the new Dominican border guard, Cesfront, the border only had a knee-high chain across it. Haitians could circulate freely to work in the town of Pedernales during the day.

Now the Dominican military makes regular roundups through the town, collecting any suspected Haitians they see and transporting them in trucks across the border. Estimates are that as much as 20 percent of the population of remote Pedernales is illegal Haitian residents who live in poor sections on the outskirts of the town, without access to running water or electricity. They build houses out of scraps of wood and tin and river rock, with dirt floors.

"It is a real problem," said Colonel Carlos Santos Nin, director of the Cesfront operation. "Most of the Haitians have no documentation at all. No papers whatsoever. No birth certificates, no identity cards, no passports, no visas. Eventually, they will all have to leave. But it is reasonably calm here. Not like Dajabon."

Pedernales, population 18,000, faces Anse a Pitres, which has about 14,000 people. But Dajabon, with 26,000, faces Ouanaminthe, with a population of 56,000. Since the completion of the new highway from Ouanaminthe to Cap Haitian, the traveling time from Cap Haitian to the northern city of Santiago in the Dominican Republic is only six hours.

The differential in prosperity can be seen in the eight banks located in the northern market towns, in contrast to the one bank in Pedernales, which had no money in the cash machine from Friday to Monday.

Activity on the border in Pedernales is now being closely monitored both by Dominican government officials and representatives of GARR, a Haitian immigrant rights group.

Jean Robert Ruiz, the representative of GARR in Anse a Pitres, said that abuses have diminished since the introduction of the Cesfront forces. "It is more orderly. They do not try to collect a tax for this, or a tax for that," he said.

Speaking on the repatriations, Ruiz said: "It is just an exercise that they must perform. The army brings them across the border in the morning and by evening, they cross the river to return back to their homes again. Most of them who live over there are not from here, from Anse a Pitres, they are from further away."

As for the lack of identity papers, Ruiz said: "Yes, this is a major problem. We do have a magistrate here in Anse a Pitres who can register births. But for anyone who does not already have papers, it is a long process. There is a legal process possible, but it requires a lot of work. It would mean a trip to Port au Prince. It would mean hiring a lawyer."

Obtaining a Haitian passport also requires a trip to Port au Prince, and costs 450 gourde (35 gourde equals one dollar). Sourette Morland, a chic young woman with gold jewelry and high-heeled sandals, proudly displayed her Haitian passport with the one-year multiple entry Dominican visa in it. The visa cost her 100 dollars, a bit less than one quarter of the annual per capita income.

"This was my first trip. I took the seven-hour ferry from Jacmel. I went to Santo Domingo and sold perfume and clothes that I had brought from Haiti. I made enough money to pay for the trip, so I will return," she said.

Inside the modern health clinic just by the Haitian border, the wail of a newborn baby cut through the air. Ruiz opened one door to a white-tiled room in which two motorbikes were stored, saying: "We have the building. But we have no equipment and very little staff: no doctor and only two nurses and one assistant to dispense a few medicines. If there is a complicated birth, the mother must go to Pedernales. And if they cannot treat her there, she must go to Barahona, or to the capital."