WASHINGTON, Nov 6 2007 (IPS) - Despite his refusal to declare water-boarding illegal, President George W. Bush’s choice to be his next attorney-general overcame a significant hurdle here Tuesday as the Senate Judiciary Committee narrowly endorsed his nomination. 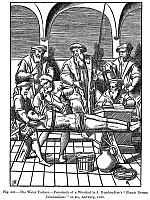 The Committee voted 11 to 8 to recommend the confirmation of ret. Federal Judge Michael Mukasey to the full Senate. He was opposed by all but two Democrats, both of whom, ironically, have been outspoken foes of the more draconian measures, including water-boarding, taken by the administration against terrorism suspects.

The two, Sens. Charles Schumer of New York and Dianne Feinstein of California, argued that Mukasey, who had described water-boarding as “repugnant” during his confirmation hearings, was likely the best nominee that Democrats could hope for in the remaining 14 months of the Bush administration.

“If we block Judge Mukasey’s nomination and then learn in six months that water-boarding has continued unabated, that victory will seem much less valuable,” Schumer argued in Tuesday’s New York Times.

With Committee action now completed, Mukasey is expected to be confirmed by the Senate as a whole later this week. He will succeed the largely disgraced Alberto Gonzales, a long-time friend and advisor to Bush who consistently approved the use of interrogation techniques, including water-boarding, that most human rights groups have denounced as “torture”.

Mukasey’s name had originally been suggested to Bush by Schumer himself, and he was considered a virtual shoo-in for the job after he was nominated in mid-September. Even some of the administration’s strongest civil rights critics praised the nominee as judicious and independent, qualities that they felt were clearly absent in his predecessor.

But Mukasey’s refusal during his confirmation hearings to call water-boarding – a technique in which the victims is made to experience all the sensations of drowning – a form of torture and thus illegal under U.S. law prompted a number of Democratic senators to raise questions both about his judgment and willingness to stand up to hard-liners in the Bush administration who have favoured the technique as a way of prying information from “high-value” detainees in the “war on terror”.

In a letter to the Committee, Mukasey wrote late last month that harsh interrogation practices, such as water-boarding, were “repugnant to me” but that he was reluctant to provide a “legal opinion based on hypothetical facts and circumstances.”

He noted that he had not been fully briefed on how that procedure or others authorised by the administration for use by the Central Intelligence Agency (CIA) – such as prolonged exposure to cold and heat and stress positions – were actually administered.

If confirmed, however, he pledged to “review any coercive interrogation techniques currently used by the United States government and the legal analysis authorising their use to assess whether such techniques comply with the law. If, after such a review, I determine that any technique is unlawful, I will not hesitate to so advise the president will rescind or correct any legal opinion of the Department of Justice that supports use of the technique.”

Leading Democrats, including the party’s major presidential candidates, denounced the nominee’s equivocation, with the frontrunner, New York Sen. Hillary Clinton, insisting, “After Alberto Gonzales’ troubled tenure, we cannot send a signal that the next attorney-general in any way condones torture or believes that the president is unconstrained by law.”

“Mukasey seems to think he was nominated to be an ethics professor rather than the nation’s chief law enforcement officer,” said HRW’s executive director, Kenneth Roth. “If he is still unsure whether the horrific practice of water-boarding is illegal, then he shouldn’t be confirmed.”

A number of the administration’s supporters have argued that water-boarding did not necessarily constitute torture or could be justified under some circumstances – including one Wall Street Journal columnist who asserted Tuesday that it was much less serious than the Allies’ firebombing of German cities and atomic bombing of Hiroshima and Nagasaki as a means of ending World War II.

However, most legal analysts said Mukasey’s evasiveness appeared designed to protect officials who carried it out or authorised it from possible prosecution for violating U.S. anti-torture laws.

“You would ask not just who carried it out but who specifically approved it,” said Silliman, an expert on national security law. “Theoretically, it could go all the way up to the president of the United States; that’s why (Mukasey will) never say it’s torture.”

Water-boarding, which dates back at least to the Spanish Inquisition, has been prosecuted in U.S. military courts as torture since the Spanish-American War more than a century ago. After World War II, the U.S. convicted several Japanese soldiers for using the technique against U.S. and allied soldiers and it was included among the charges against top Japanese officials in the Tokyo War Crimes Trials, according to Evan Wallach, a judge at the U.S. Court of International Trade who teaches the law of war at New York law schools.

In August 2006, the Judge Advocates General of the U.S. Army, Navy, Air Force and Marines all testified that they considered the practice a violation of U.S. law and the law of war, and the revised U.S. Army Field Manual issued last year explicitly banned its use, as well as other techniques that the Justice Department has authorised for use by the CIA.

Daniel Levin, a senior Justice Department political appointee, according to a report aired Friday by ABC World News, was himself so troubled by the use of water-boarding that he voluntarily underwent the procedure at an army base in late 2004 and began drafting a legal opinion in which he wrote that it could be considered torture unless performed under the strictest supervision and the most limited way possible.

According to the report, however, Levin, whose right-wing positions on most issues had helped him obtain his senior post, abruptly left the Department several months later after Gonzales was promoted from White House counsel to attorney-general, for reasons that have never before been explained.

What precisely Mukasey will do about water-boarding and other “enhanced interrogation techniques,” as Bush himself has referred to them, once, as now seems virtually certain, he is confirmed as attorney-general, remains a source of vigorous speculation here.

At least four Republican senators who have said they expect to approve his nomination have publicly urged him to declare water-boarding illegal after his confirmation, and the Washington Post, whose editorial positions have been mildly critical of the administration’s treatment of terrorist suspects, called for Mukasey, once confirmed, to adopt as his “first priority… the eradication of this kind of disregard for principle and law.”