DEVELOPMENT: Food Prices Climbing, With No End in Sight

WASHINGTON, Dec 5 2007 (IPS) - Globalisation, climate change, and the mass production of biofuels are pushing up food prices worldwide, which could jeopardise the livelihoods of the world&#39s poorest, according to a report released Tuesday by the International Food Policy Research Institute (IFPRI). 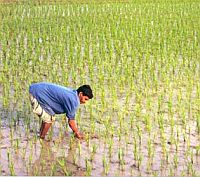 "Food prices have been steadily decreasing since the Green Revolution, but the days of falling food prices may be over," said Joachim von Braun, lead author of the report and director general of IFPRI.

Titled, "The World Food Situation: New Driving Forces and Required Actions", the 16-page report examined how various global trends are impacting world hunger on both the supply and demand ends of the market.

"Surging demand for feed, food, and fuel have recently led to drastic price increases, which are not likely to fall in the foreseeable future," von Braun said. But "climate change will also have a negative impact on food production."

Similar findings have been reported by the Organisation for Economic Cooperation and Development, the U.S. Department of Agriculture, and the U.N. Food and Agriculture Organisation, according to IFPRI.

Researchers predict that shifting weather conditions resulting from climate change will disrupt rainfall patterns that farmers rely on to nourish their crops and water the grasslands that feed their livestock. As a result, cereal production in South Asia could drop 22 percent by 2080, while wheat production in Africa may virtually disappear by that time, the report said.

Furthermore, temperature increases of more than three degrees Celsius could in turn lift food prices by as much as 40 percent.

If the countries that have already committed to biofuel production, as well as other high-potential producer countries, carry out their current investment plans, global maize prices would increase by 26 percent and oilseed prices would rise by 18 percent by 2020, according to the report. This is due to state subsidies for biofuels, as well the shift in committing scarce resources toward cultivating biofuel crops.

"As biofuels become increasingly profitable, more land, water, and capital will be diverted to their production, and the world will face more trade-offs between food and fuel," the report said.

In the U.S. alone, the use of maize for ethanol production increased by two and a half times between 2000 and 2006.

On the demand side of worldwide food production, globalisation, economic growth, and urbanisation in places such as China and India have impacted people&#39s dietary preferences and food choices, the report noted. While demand is on the increase for processed food and high-value agricultural crops such as vegetables, fruit, meat and dairy, demand for grains and other staple crops is declining.

This shift in "tastes" represents a microcosm of the food costs issue, said IPFRI research analyst Timothy Sulser, who also contributed to the report. As wealthier populations shift to a diet full of meat, fruits, and vegetables, poorer populations will struggle to afford ever pricier food staples.

"There will be an even wider gap between affluent people and poorer people in terms of access to a nutritional diet" if trends continue, Sulser said.

With many factors threatening the world&#39s food supply and demand, immediate action is needed in the areas of international development and global trade policy in order to avert what could be a dramatic hunger crisis, according to authors of the report.

Eliminating trade barriers and programs that set aside agriculture resources is one way that developed countries could help equip developing countries for the rising food prices.

Other suggestions include strengthening policies to promote early childhood nutrition – thereby diminishing the risks related to limited food access – and incorporating food and agriculture considerations into the agenda for domestic and international climate change policy.

Yet these solutions may only mitigate the effects of a global trend whose causal forces, such as globalisation and climate change, have already been set in motion, say researchers.

"The policy suggestions are intended to help minimise some of the impact of these changes," said Sulser. "It&#39s important now to look at how we can help people adapt to the changing the situation."