Q&A: “We Are Haunted By a War Begun Under False Pretences”

Interview with Chuck Lewis, founder of the Centre for Public Integrity

WASHINGTON, Jan 23 2008 (IPS) - Eight key players in the George W. Bush administration, including the president himself, made at least 935 false statements in the run-up to and aftermath of the invasion of Iraq in 2003. 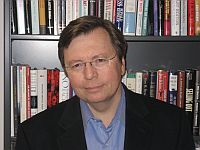 These are some of the findings of a mammoth report just released by the Centre for Public Integrity, directed by founder Chuck Lewis.

What this report proves is remarkable, even though it is now a matter of public record that there were no WMD in Iraq and that the attacks against the U.S. in 2001 had no connection to Saddam Hussein.

Lewis concludes in a statement: “Clearly, this Iraq chronology calls into question the repeated assertions of Bush administration officials that they were merely the unwitting victims of bad intelligence. More broadly, consider the timeless words of the late historian and Librarian of Congress, Daniel Boorstin, in his classic 1961 work, “The Image”: ‘We suffer primarily not from our vices or our weaknesses, but from our illusions. We are haunted, not by reality, but by those images we have put in place of reality.’ America went to war nearly five years ago after an orchestrated campaign of false statements by the nation’s top officials, a war begun under the illusion of an imminent national security threat. We are haunted by a war begun, in other words, under false pretences.”

Lewis spoke with IPS’s Editor in Chief Miren Gutierrez about what he says is “an unprecedented, 380,000-word, online searchable, public and private Iraq war chronology, the public statements interlaced with the internal knowledge, discussions, doubts, and dissent known at the time. What they said publicly juxtaposed against what they knew internally.”

IPS: You have tagged how many false statements were made by these top officials over the two years. How many exactly? Can you make any comparisons?

CL: We found 935 false statements… Bush made the most statements; McClellan the fewest. No one has ever done this for any other U.S. war, to my knowledge, a public and private chronology of what they said versus what they knew internally. There is no comparison to the past.

IPS: What do these statements tell us about their timing? Was it an orchestrated, systematic operation? How do you know?

CL: The statements were made most heavily in the weeks leading up to the Congressional resolution and midterm elections, and spiked up twice as high in volume between January and March. 935 false statements, 532 different occasions… Yes, it was a systematic operation. We know it now because the saturation of statements, officials, all saying essentially the same thing, 935 times, always on message. It could not possibly be inadvertent or coincidental.

IPS: Separately, you have gathered material from more than 25 government, whistleblower and journalist-reported books about this subject, published between 9/11 and the end of 2007. Do any clear patterns emerge from that exercise? Is there any consensus?

CL: The most disturbing pattern is that questions were raised internally, at the White House, Pentagon, State Department and intelligence community, about these officials’ statements and their ambitions for war, and most important, about the intelligence being asserted. There were dissonant views suggesting various key parts of the “evidence” were a hoax or simply inconclusive. Repeatedly the top officials were told not to say things in their speeches, repeatedly they said them anyway. The biggest news to me is that the “consensus” was anything but unanimous, as the White House would like everyone to believe. Certain pro-war intelligence was exaggerated and overstated, and cross current intelligence suggesting there was no imminent national security threat to the U.S. or other nations was ignored. All of this can be found searching and reading through the 380,000-word public and private Iraq war chronology.

IPS: Bush’s government had made lots of noises about Iran’s nuclear programme. However, a December 2007 U.S. intelligence report concluded that Iran halted work toward a nuclear weapon in 2003, and is unlikely to be able to produce enough enriched uranium for a bomb until 2010 to 2015. Can you spot any similarities with the situation right before the invasion of Iraq?

CL: The human intelligence sources cited by Powell in his U.N. speech were not reliable, doubts had been expressed inside the administration, especially the intelligence agencies. But on with the show anyway… In the weeks before the Congressional Iraq vote, Bush and Cheney made flat declarations we now know were false about the WMD threat in Iraq – and no National Intelligence Estimate (NIE) had been done by the CIA in years, because it was not seen as a hotspot or front-burner problem. And the White House had not requested an NIE… Intelligence information in this and other past administrations is a commodity to be marshaled for political policy outcomes.

IPS: The report is part of a book on which you are working about “truth, power, the state of journalism today”. What is the state of U.S. journalism after the war in Iraq? Why has this war been different for journalism from other wars in the past?

CL: Not good, emaciated economically, thousands of reporters and editors fired since 2000, still too easily misled, not sufficiently sceptical of officialdom, of government, of power. This war based on false pretences played out over 18 months, before our eyes, with all the world to see, with nearly all of the U.S. news media stenographically repeating what the Bush administration had said, amplifying the misinformation with little scepticism or original reporting. In the Gulf of Tonkin resolution in 1964, the false pretences about the U.S. being fired upon first (the opposite was true), the Congressional lockstep response to a president’s request for war legislation and fawning, uncritical media coverage, between “attacks” and war legislation signed into law, took exactly one week. Journalism didn’t have a chance – that war was remote, out on the water, often at night, no reporters nearby, solely reliant on the White House and Pentagon, coordinating their messages…

IPS: All this has happened a few years ago. Why is it relevant now?

CL: Because the full story of why the U.S. went to war has still not been fully told, memoirs and presidential legacies and mythologies will only grow over time. What we need are facts, who said what, when, what did they actually know before they spoke. This chronology sets that down in one place, accessible and updatable for years to come. And it is relevant because presidents make flawed, human decisions that affect the nation and the world, not to mention thousands upon thousands of lives, and there must be, in a democracy, independent accountability and factual scrutiny about what is true, was true, will always be true. What the world needs most, though, is real-time truth, not years later. Maybe, because of this debacle of the past five years, reporters and citizens will become more sceptical and discerning of politicians and those in power.