NAIROBI, Feb 14 2008 (IPS) - Anthony Njoroge passes the ball to David Onyango, whose shot makes it past the goalkeeper to a thunderous cheer from spectators at Huruma Stadium, in Nairobi&#39s Eastlands slum area. 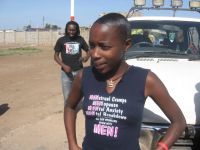 Onyango&#39s teenaged teammates, including Njoroge, hug him; nothing surprising there, you might think. Yet just a few days before this football game Onyango, a member of the Luo tribe and Njoroge, a Kikuyu, were caught up in the ethnic hostility that has flared in the wake of Kenya&#39s disputed Dec. 27 presidential election.

Mwai Kibaki, declared winner of the poll, is also a Kikuyu, while principal challenger Raila Odinga – who claims the vote was rigged – is a Luo. The Kikuyu and Luo are respectively the first and third largest tribes in Kenya, which is home to about 40 ethnic groups in all. Much of the anger over past weeks has been directed against Kikuyus, whose dominance of political and economic life in the East African country has made them the target of considerable resentment.

Slums in the capital are amongst those areas which bore the brunt of the violence. Amidst arson and rioting, a number of districts have become dangerous for the members of certain ethnic groups, and rather than run the gauntlet many residents moved to neighbourhoods dominated by members of their own tribe.

"This has affected our normal relations. I don&#39t want to be seen as Kikuyu," Njoroge told IPS. "I was born and brought up here in Huruma and my friends are from the area. Before now we never bothered to know which tribe one came from."

The match that has brought Njoroge and Onyango together is part of an initiative to relegate ethnic divisions to the sidelines once again. &#39Kicks for Peace&#39, a football tournament for young people that will wrap up Sunday, is being held by various non-governmental organisations – and has attracted over 100 multi-ethnic teams.

Matches are taking place in eight slum areas, with various dignitaries expected at the final game in the week-long event.

"In soccer you must play as a team. When you are a team you don&#39t pass the ball to your best friend or tribesman but to a teammate. This is what we want the youth to have in mind in their normal daily relations," John Muiruri of the African Medical & Research Foundation (AMREF), one of the tournament sponsors, told IPS. AMREF is headquartered in Nairobi.

Noted Ecosandals founder Matthew Myers, "The young people get to understand that leaders will come and go, but until we as human beings come together with creative solutions to eradicate attitudes of tribal hatred from every corner of this globe, ethnic cleansing and genocide will persist. That is what &#39Kicks for Peace&#39 is about."

Ecosandals, also a sponsor, is a non-profit that produces sandals for the international market, to benefit the shantytown of Korogocho and surrounding areas.

Skits about reconciliation and discussions on ways of restoring peace to Kenya are taking place alongside the matches.

Calvin Mbugua, who has assisted with organising teams in Huruma, says he&#39s used his personal experiences to help youngsters understand that Kenyans can reach beyond ethnic divisions.

"I am a Kikuyu, but I was literally raised up by a Luo neighbour. I had meals in his house with his children, who were my friends, because there was hardly food at our home. He saw me as one of his own children and the issue of tribe never came up," he told IPS.

"It is painful to see this hatred permeating our community. It must be stopped," added Mbugua, who is also co-founder of a youth sports association.

He said that although the situation in the slums had calmed as mediation efforts chaired by former United Nations secretary-general Kofi Annan got underway, there was still animosity among residents.

"They know the people who beat them up or burnt their properties, and they find it hard to forgive them. Through the tournament we hope to plant the seed of forgiveness among dwellers of Kenya&#39s poorest neighbourhoods."

Reports Thursday said Kibaki&#39s Party of National Unity (PNU) had signed an agreement with the Orange Democratic Movement (ODM) to end the political impasse, which has resulted in more than 1,000 deaths and displaced as many as 600,000 people, according to the United Nations.

However, chief PNU negotiator Martha Karua was quoted as saying that no conclusive agreement had been reached. Even though international observers have also cast doubt on December&#39s presidential vote, Kibaki insists he won the ballot fairly.

While details of the reported accord were not immediately available, speculation over recent weeks has focused on the creation of a power-sharing government – and Annan spoke of a possible "grand coalition" while briefing parliament Tuesday on the status of negotiations.

Back on the football field, the deliberations of political leaders receive short shrift from the likes of Mary Wanjiru, who scored two goals for her team, and whose best friend is from the Luo group.

"Although the violence has not affected our friendship, you can still feel the tension because of the sentiments bandied around by people who make tribe an issue in this conflict," she told IPS.

"The politicians are fighting for power, but for us here it doesn&#39t matter who is in power: our fears, desires and struggles remain the same."