DAJABON, Feb 4 2008 (IPS) - In a display of national sovereignty, Haiti is continuing an embargo against the importation of all poultry products from the Dominican Republic, prompting some Dominicans to boycott border markets in northwest Dajabon province. 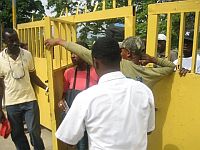 The embargo, now in its second month, was instituted after an outbreak of the H5N2 strain of avian flu, and includes all live birds, all eggs, and all poultry products including soup and salami made from chicken.

It remains in place despite two official Dominican delegation visits to Haiti and one official inspection visit of Dominican poultry sites by Haitian agricultural and health officials.

Embargos on imports from nations affected by avian flu are common internationally. The United States has in place an embargo on the importation of poultry products from 37 countries, including parts of France and England. Yet all of these nations had outbreaks of the most virulent strain of the virus, H5N1. The strain of flu found in the Dominican birds was H5N2, which has never crossed between birds and humans. Imports from the Dominican Republic are not under United States embargo.

The outbreak of the avian flu H5N2 in two discrete areas inside the Dominican Republic was first detected on Dec. 10, 2007 following a routine inspection of fighting cocks being exported to Colombia. Dominican authorities slaughtered the 114 affected birds and notified the international authorities, OIE (Organisation Internationale des Epizootes) on Dec. 12, and the Pan American Health Organisation on Dec. 21 after confirmation of the flu at laboratories in the United States.

Imports of live poultry and poultry products from the Dominican Republic were quickly banned by Puerto Rico, Colombia, Guyana, the Turks and Caicos, St. Martin and neighbouring Haiti. The embargo by Puerto Rico has since been lifted.

On the OIE website, the avian flu outbreak in the Dominican Republic is listed as ongoing.

In 1982, an outbreak of swine flu inside the Dominican Republic led the United States to pressure the Haitian government to slaughter all of its indigenous small Creole pigs, the backbone of the Haitian economy. This episode marked a swift descent into deeper poverty and malnutrition in Haiti.

A recent 10-hour long call-in radio programme in the Dominican border town of Dajabon aired the traditional hostilities between these two nations. Relations are particularly sore between Ouanaminthe, Haiti and Dajabon, site of the 1937 massacre of tens of thousands of Haitians under Dominican dictator Rafael Trujillo, the confiscation of fertile farming land of the Maribaux plain for the Dominican Groupo M free trade zone, and continued forced deportations of undocumented Haitians.

According to a report issued by the Jesuit Society on Immigration, Dominican exports to Haiti had already fallen almost 8 percent in the first half of last year, with Haiti falling from the number three importer of Dominican products to sixth place. However, Haiti has been the receiver of 52 percent of the Dominican egg production, commerce that reaches into the millions of dollars annually.

Dominican poultry and egg producers have taken extraordinary measures to ensure the safety of their poultry, including washing all trucks entering and leaving their facilities and having their workers change clothes upon entering work.

Dominican authorities had no fears that the flu would infect their own domestic production and assured the local population that plenty of chickens would be available for the traditional Christmas dinner.

Because the Haitian embargo included not only live birds and eggs but all products made from chickens, including soup and salami, and since the avian flu virus is not transmitted in properly cooked eggs or poultry, Dominicans suspect that the embargo has more to do with trade than health.

Asked whether the embargo is to show the strength of the Haitian state vis-à-vis the Dominican Republic, rather than a matter of health, Jean Baptiste Bien-Aime, Haitian Consul in Dajabon, told IPS: “This is not what we are looking for in Haiti. We took this decision to protect both the human and poultry population. The Dominican Republic and Haiti are both members of the OMSA (Organisation Mundial por la Sanidad Animal) (World Organisation for Animal Health) and they have both signed international agreements in which the OIE under the OMSA is the only organisation which can certify that this virus is under control.”

He said that OMSA had done so on Jan. 7, but that “the final clearance has not come through”.

“I hope that this resolves itself quickly. This has not done much good either in Haiti or the Dominican Republic. On the contrary, in Haiti, neither chickens nor eggs are being eaten since we are not sure where they come from. Haiti has more interest than the Dominican Republic in having this issue resolved,” he said.

Answering a question about the Dajabon-Ouanaminthe market, which is held twice weekly on the Dominican side, Bien-Aime said: “It would be better if it were held one day a week in Haiti and one day a week here. That is more just.”

Dominican merchants carried out a threat to boycott Haitian goods at the market Monday. Thirty to 40 percent of all trade between these two nations passes through this northern boundary, according to Haroldo Dilla Alfonso in the newly released book, “Ciudades en la Frontera” (Santo Domingo, 2008).

However, Monday is Carnival in the north of Haiti so that not much trade would be expected.