MEXICO CITY, Feb 16 2008 (IPS) - Never before have Latin America and the Caribbean fought so hard against deforestation, say experts and government officials, but logging in the region has increased to the point that it has the highest rate in the world. 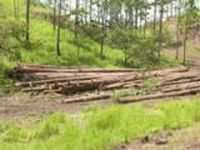 Honduras is among the leaders in destruction of forests. Credit: Fundación Democracia sin Fronteras

Of every 100 hectares of forest lost worldwide between the years 2000 and 2005, nearly 65 were in Latin America and the Caribbean. In that period, the average annual rate was 4.7 million hectares lost – 249,000 hectares more than the entire decade of the 1990s.

Deforestation remains difficult to deal with because there are many economic interests in play, according to Ricardo Sánchez, director for Latin America and the Caribbean of the United Nations Environment Programme (UNEP).

At their latest forum, held Jan. 30-Feb. 1 in Santo Domingo, the region’s environment ministers received a limited-circulation report that reveals, among other matters, the failure of strategies against forest destruction.

The document, “Latin American and Caribbean Initiative for Sustainable Development – 5 Years After Its Adoption” (ILAC), evaluates the official commitments made by governments in 2002.

“There is action by governments against deforestation like never before, but we are seeing that it is not an easy task, because there is strong pressure from economic groups,” Sánchez told Tierramérica.

Logging results in the loss of biodiversity and degradation of soils, as well as contributing to extreme climate phenomena, added the UNEP official.

Between 2000 and 2005, the proportion of total land surface covered by forests fell in the Mesoamerica region (southern Mexico and Central America) from 36.9 to 35.8 percent, and in South America from 48.4 to 47.2 percent. However, in the Caribbean it increased from 31.0 to 31.4 percent.

According to Mexican expert Enrique Provencio, author of the ILAC report, the principal cause of the increased pace of deforestation is the advance of the monoculture farming frontier, a phenomenon that did not carry as much weight in the 1990s.

“There was a rise in international prices of products like soybeans, which drove the occupation and clear-cutting of forested areas, especially in Bolivia, Brazil and Paraguay,” Provencio told Tierramérica.

The ILAC report indicates that although forestry activity has maintained a positive performance in terms of improving productivity and advances in sustainable management and other practices, such as certification of sustainably harvested lumber, it has not prevented the loss of forests.

According to the study, in some countries the shrinking of forested areas continues to be associated with an increase in livestock-raising and the classic model of expanding pasture area by cutting down forests.

To combat deforestation, in recent years most governments have designed new monitoring and control mechanisms, with some even using the army to go after illegal loggers. Many countries have also passed laws that crack down hard on those who destroy forests.

Sánchez highlighted recent efforts, such as Argentina’s passage in late 2007 of a Law on Forests following a campaign by environmentalists who collected 1.5 million signatures.

The new law stipulates that the authorities must draw up new forestry plans and that permits for logging will only be issued after the approval of an environmental impact study and the holding of public hearings.

Other positives the UNEP director has found in this environmental fight are the efforts of Brazil, which set up inter-ministerial mechanisms to deal with the question, and the creation in Chile and Peru of “super-agencies” against deforestation.

But the problem persists. “This shows that we continue to be economies dependent on the intensive use of natural resources and that the growing demand for food and other products has fuelled an advance of the agricultural frontier,” said Sánchez.

Provencio, former director of the Mexican government’s National Ecology Institute, believes it is too soon to know whether the deforestation rate will remain high in the coming years, but pointed to initiatives under way that could halt or even reverse it.

There are forestry defence and reforestation efforts that have been highly successful in Costa Rica, Cuba, Santa Lucia and Uruguay, he said. In contrast, “the situation in Brazil’s Amazon region is of great concern, and that could have an impact on the statistics from the entire region.”

Another positive sign is the increase in the total area designated as nature reserves. In the 2000-2005 period, it grew from 19.2 to 20.6 percent of the territory in Latin America and the Caribbean, representing 320,400 square kilometres.

Although the increase in protected areas cannot compensate for the loss of forest, “the process gives us some hope,” said Provencio.