SANTIAGO, Feb 25 2008 (IPS) - While Mapuche Indians in Chile complain that the government has “criminalised” their land-rights protests, many indigenous people are in prison in Mexico and Peru because there were no translators to explain why they were on trial. 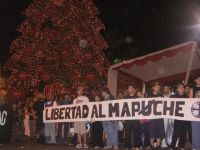 There is no statistical evidence of judicial persecution of the indigenous populations in Chile, Mexico and Peru. The number of aboriginal people behind bars in all three countries is quite small, and the proportion of indigenous prisoners per capita is lower than that of the population at large.

But the causes, conditions and duration of their incarceration, along with the testimony of experts, demonstrate that the marginalisation suffered by indigenous people makes them more vulnerable to abuses of the justice system and to frequent violations of due process in the region.

In Chile, there are nine indigenous ethnic groups recognised by the government. According to 2006 statistics, there are 922,833 Mapuche, who make up 87.2 percent of the country’s indigenous population.

A 2005 study by the country’s prison authorities revealed that there were a total of 1,207 indigenous people imprisoned in five regions, of whom 83 percent were Mapuche.

Chile’s total prison population is 43,000, in a country of more than 16 million. And while indigenous people make up 6.6 percent of the country’s population, they account for only 2.8 percent of the total number of prisoners.

The main crimes for which indigenous people are charged are crimes against property (50.2 percent) and crimes against persons (15.9 percent), in addition to drug trafficking and violations of weapons laws (15.2 percent).

Although the majority of Mapuche inmates are in prison for crimes against property, the statistics do not specify whether these crimes were committed in the context of the Mapuche people’s longstanding conflict with the government over demands for greater political, cultural and land rights.

The Santiago-based Mapuche organisation Meli Wixan Mapu states that as of the beginning of 2008 there were 15 “Mapuche political prisoners” in jails in southern Chile. Most of them were tried and sentenced under a severe anti-terrorism law that was enacted during the 1973-1990 dictatorship and amended – but not repealed – following the return to democracy.

Since 1990, according to the organisation, close to 500 Mapuche have been prosecuted for their participation in social protest actions. Some 150 are currently facing charges. The crimes attributed to them include illegal land seizure, arson attacks against agricultural and forestry operations, threats and assault against large landowners, theft of animals and timber, and public disturbances.

In his book “Los mapuches ante la justicia. La criminalización de la protesta indígena en Chile” (The Mapuche People and the Justice System: The Criminalisation of Indigenous Protest in Chile), researcher Eduardo Mella maintains that the four centre-left administrations in power since 1990 have avoided a resolution of the ongoing conflict between the Chilean state and the Mapuche people – which dates back to the late 19th century and the first land seizures – by transferring the conflict to the judicial sphere and thus demobilising the indigenous communities.

The theory of the “judicialisation” and “criminalisation” of Mapuche protest gained greater strength in 2001 when then-president Ricardo Lagos (2000-2006) invoked the dictatorship-era anti-terrorism law, a move that was criticised by numerous national and international organisations, as well as the U.N. Special Rapporteur on the Human Rights and Fundamental Freedoms of Indigenous Peoples, Rodolfo Stavenhagen, in his 2003 report on Chile.

In an interview with IPS, Mella noted that almost all of the indigenous activists are held in preventive detention – a measure that should only be used in exceptional cases – “for two or three months, regardless of whether they are acquitted or the charges against them are dropped. In many cases, the preventive detention is the punishment in itself.”

There are indigenous activists who prefer to remain underground because they do not believe that they are offered any guarantees by the justice system. Communities in conflict have also denounced serious abuses committed by the police while searching for evidence and suspects.

The Observatory for Indigenous Peoples’ Rights documented 18 cases of police brutality in 2006 and another 26 in 2007. The year 2008 began with the death of university student Matías Catrileo, shot by the police while he was participating with a group of fellow activists in the occupation of privately owned rural property.

Meanwhile, in Mexico, there are some 250,000 people in prison, 8,767 of whom are indigenous. The population of Mexico is roughly 104 million, and estimates place the number of indigenous people at between 12 and 13 million.

Nevertheless, since the mid-1990s, the Mexican government has acknowledged that indigenous incarceration is a serious social problem and has designed programmes to support those involved.

According to studies by the state-run National Commission for the Development of Indigenous Peoples (CDI), the majority of indigenous prisoners have been charged with assault, robbery, and “crimes against health” such as the cultivation and transportation of illegal drugs.

In 2007, the government allocated 900 million dollars to following up on these cases, providing assistance to those detained, and when possible, securing their release.

The CDI states that in the majority of cases, indigenous inmates are in jail because they cannot afford the cost of bail or pay for reparations for damages.

Between January and November 2007, the CDI programme achieved the release of 620 indigenous prisoners, mainly men.

“Unfortunately, they commit some offence against society, sometimes a minor offence, which might be stealing to be able to eat, and they are deprived of their freedom,” commented Jesús King, director of the CDI department for the promotion of justice-related agreements.

“It’s terrible what happens to a lot of our brothers. They are in prison simply because there wasn’t a translator or lawyer who could properly explain to them what they were being accused of,” said Gilberto Rivera, a Nahua Indian and lawyer who assists indigenous prisoners. “This is changing, although slowly,” he told IPS.

“For an indigenous person, being in prison represents one more link in the chain of discrimination. I’m talking about racism, but also about poverty, ignorance and the lack of schooling. As is the case in all of Latin America, here indigenous people are the last wheel on the coach, but one thing is for sure, we are very proud of our pre-colonial past,” added Rivera.

The situation is similar in Peru, where there were 176 indigenous people in prison in early 2008, according to statistics from the governmental National Penitentiary Institute.

Although the number of indigenous prisoners is small when compared to the total prison population of 41,428 and the country’s total indigenous population of 8.7 million, the reasons for their incarceration reflect the high degree of vulnerability faced by Peru’s aboriginal peoples.

In most cases, indigenous people end up behind bars because “the authorities don’t take their cultural characteristics into account and they also don’t offer legal guarantees like the presence of an interpreter in the native tongue of the indigenous person during the trial,” Margot Quispe, head of the Ucayali Ombudsperson’s Office, told IPS.

Due to the fact that the largest number of indigenous prisoners are concentrated in the Amazonian region of Ucayali, Quispe is promoting talks with authorities from the regional branch of the Interethnic Association for the Development of the Peruvian Rainforest (AIDESEP).

In the Pucallpa Penitentiary Centre in Ucayali alone there are currently 101 indigenous inmates, either awaiting trial or already sentenced. In 15 percent of the cases, imprisonment resulted from clashes with non-indigenous settlers or logging companies that are threatening their territories.

Most indigenous prisoners are men. The main crime they are charged with is rape, a charge that is often at odds with the indigenous tradition of early sexual initiation: it is fully acceptable for girls as young as 13 to become pregnant and start a family. The other most common offences are drug trafficking and homicide.

The head of the legal department of the Ucayali regional indigenous organisation, Carla Pizarro, told IPS that quite frequently, settlers or illegal loggers accuse indigenous people of crimes to seek revenge for opposition to their activities.

“They accuse them of raping women in the communities or of robbery when community leaders seize the shipments of wood they are illegally extracting from their forests,” said Pizarro.

Milton Silva, a long-time indigenous leader from Ucayali, is currently imprisoned in Pucallpa on a homicide charge. He allegedly instigated a group of indigenous people in the community of Nuevo San Juan to beat a settler to death, after the settler had illegally appropriated their lands and ordered the shooting of one of the indigenous community members.

But Silva insists he was never in the place where the events took place. “I was called on by the indigenous brothers a few days earlier to give them legal advice, because I worked with the lawyer from the indigenous organisation. But I never told them to resort to violence,” he told IPS in an interview at the prison.