RIGHTS-GUATEMALA: A Minute of Silence for the Victims

GUATEMALA CITY, Feb 25 2008 (IPS) - “I’m a widow. The army took away my husband,” said Celestina Otzoy, an indigenous woman who had five children when her husband was “disappeared” in 1982 in the central Guatemalan region of San Juan de Comalapa during the country’s 1960-1996 armed conflict. 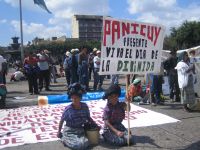 Kneeling before a sheet spread on the ground that read “Victims of the internal armed conflict – San Juan de Comalapa: Present in the struggle”, Otzoy was one of hundreds of people who gathered Monday in the Guatemalan capital to commemorate the National Day of Dignity for Victims of the War, declared on Feb. 25, 2000.

A 1996 peace agreement put an end to the bloody 36-year civil war in which some 200,000 mainly rural indigenous people were killed. An independent truth commission found the army responsible for more than 90 percent of the killings.

“We are asking the president to create specific institutions for the National Reparations Programme (PNR) in order to make better use of the funds earmarked for the victims,” Raúl Nágera, with the National Union of Communities for Integral Human Rights (UNACODI), told IPS.

The PNR was established in April 2003 and furnished with an annual budget of around 40 million dollars. It was conceived of as a set of policies, projects and actions to indemnify and improve the situation of victims and survivors of the armed conflict, as recommended by the truth commission, formally known as the “commission for historical clarification”.

Nágera complained that since the PNR’s budget has been administered by other institutions, the funds have not been fully distributed, and “reparations for the victims have not been made.”

“There are more than 35,000 files entered into the PNR database, and we are demanding that the people receive damages promptly,” he said.

In this impoverished Central American country, where indigenous people make up a majority of the population and continue to suffer deep-rooted discrimination, there is no national registry of victims of the civil war or reliable figures of the number of survivors, which makes it difficult to estimate the amount needed for reparations.

In a statement released Monday, UNACODI asked President Álvaro Colom, who took office on Jan. 14, to “respect our right to the truth, justice and full reparations for the human rights violations covered by the programme: physical and psychological torture, extrajudicial executions, forced displacement, the recruitment of minors and rape.”

In a ceremony held in the National Palace of Culture to mark the National Day of Dignity for Victims of the War, Colom instructed his Secretary for Peace and Human Rights, Orlando Blanco, to set up a team whose task would be to open up the army’s archives.

The social democratic Colom acknowledged that the state committed atrocities during the civil war, and said the best thing would be to transfer the military’s archives to the office of the Human Rights Ombudsman.

“Today I want to make a commitment to Guatemala, but especially to the victims” of the armed conflict, said Colom. “Now you have a government led by a president who is not going to hide anything.”

It is up to the Constitutional Court to decide whether to declassify documents from 1982 and 1983 military operations commanded by then dictator Efraín Ríos Montt that would shed light on the genocide committed in Guatemala.

Former General Ríos Montt was de facto president of Guatemala during the bloodiest period of the civil war. Under his “scorched earth” counterinsurgency campaign, hundreds of indigenous villages were destroyed, along with every single inhabitant.

The former dictator’s defence attorneys argue that a document considered to be a “state secret” can only be declassified after 30 years, or under a decision by the same authority that classified it – in this case, the Defence Ministry.

But Article 30 of the Guatemalan constitution stipulates that all administrative documents and files are public unless they deal with military or diplomatic affairs involving national security.

On Jul. 7, 2006, a high court in Spain – the Audiencia Nacional – issued international warrants for the arrest and extradition to Spain of Ríos Montt, who is currently a member of Congress, and other officials from his de facto government.

They are facing charges of genocide, torture, state terrorism, and other crimes against humanity, filed by indigenous activist and 1992 Nobel Peace Prize-winner Rigoberta Menchú.

According to the document from the Spanish court, 93 percent of the murders were committed by agents of the state, 430 villages were wiped off the map, and 667 massacres were committed.

The document also says that 83 percent of the victims, many of whom were tortured before they were killed, were Mayan Indians, while the remaining 17 percent were “mestizos” (people of mixed indigenous and European descent).

During the war, close to 1.5 million people were forced to flee their homes, over 45,000 people are still missing, and 150,000 people sought refuge across the border in Mexico.

Luís Méndez, with the Sons and Daughters for Identity and Justice against Oblivion and Silence (HIJOS), a local human rights group, told IPS that “there is still a mantle of impunity” covering the events of the armed conflict.

He also expressed his concern that “the new government officials have not recognised the army as solely responsible for the human rights crimes.”

On Saturday, HIJOS called for a posthumous condemnation of the former chief of the now-dismantled National Police, Germán Chupina, who died on Feb. 17. Chupina was one of the former officials wanted in Spain for crimes against humanity.

Méndez, whose aunt was forcibly disappeared in March 1984, said the National Reparations Programme “has not been implemented” and is fraught with shortcomings, such as a failure “to recognise the category of the ‘disappeared’, who are presumed dead.”

And in cases of rape, which were frequent during the armed conflict, the PNR requires “proof that rape occurred; the testimony of the women is not sufficient.”

The activist insisted that not only monetary reparations are needed. He said, for example, that military parades continue to be held, even though they are an affront to the victims.

“We will give an impulse to actions aimed at moving towards solutions to pending problems from the past,” Secretary Blanco said in his speech at the National Palace of Culture Monday.

The official said “real reparations to the victims cannot be put off, nor can acknowledgement of the responsibility of the government and state security forces in the attacks on the indigenous population.”

Blanco added that the government would give priority to a comprehensive set of compensation measures, including housing, educational and psychological assistance, and announced the creation of a National Commission to Search for the Detained-Disappeared.

“The army evicted us from our land. We lost our livestock and crops. I spent seven years as a refugee in Mexico, and when I came back, someone else was living in my place,” Fidelio Ahilán, from the southern village of Escuintla, told IPS.

In memory of the victims, a minute of silence was observed in schools throughout the country Monday.