SEATTLE, Mar 13 2008 (IPS) - The small city of Forks sits in the northwest corner of Washington State&#39s Olympic Peninsula, four hours away from Seattle by car, tucked near the Pacific coast by one of only two temperate rainforests in the world. The city literally grew from the trees that surround it. Its industry: timber. 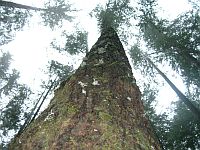 But the party has long since ended. Gone are the days of seemingly endless streams of log trucks roaring in and out of town, making the local Bank of America&#39s multi-lane drive-through service, which is large enough to accommodate 16-wheelers, a strange relic. According to one city official, more millionaires per capita once frequented the bank than anywhere else in the state.

Forks has been languishing in economic limbo as it seeks to diversify its economy and re-identify itself, an all too common problem with resource-dependent coastal communities far from the urban corridor of Washington State.

"Before the decline there was lots of opportunity, lots of wealth being created, people taking risks, families moving in, businesses being started, and things were just very vital and growing," said John Calhoun, director of the Olympic Natural Resources Centre.

The boom years of the 1970s and 80s came to a crashing halt after a series of legal challenges created habitual protection, in particular the listing of the northern spotted owl as a threatened species under the Endangered Species Act in 1990, seriously restricting timber harvests on public lands.

After Oregon, Washington is the second largest supplier of soft wood (from conifers) in the United States, accounting for 13 percent of total production, according to the Washington Forest Protection Association.

In the twin cities of Hoquiam and Aberdeen located in Grays Harbor County, roughly 193 kilometres south of Forks, the unemployment rate is approaching 10 percent, five points higher than the state average. Also dependent on the timber industry, a majority of jobs is now in the services and government sectors, as manufacturing jobs have spiraled downwards.

Although the unemployment rate is closer to the state average in Forks, employment trends are similar as the community is highly dependent on jobs from the city hospital, school district and Clallam Bay Corrections Centre located more than 80 kilometres to the north. Tourism generates additional revenues during the summer months, with visitors filling up the buckshot of lodges and hotels scattered around the community – mostly urbanites seeking the pristine beaches or steelhead and salmon fishing in one of the many local rivers.

"I think you&#39re looking at a 20-year transition," said Al Vaughan of the Department of Natural Resources, who is based in Forks. "I think forestry is still going to be a primary income production. It&#39s going to take light industry, and I think the industry needs to be associated with forestry in some way."

However, Calhoun feels the future of Forks could very well come in the form of utilising bio-mass, which is essentially vegetating matter in the forest like woodchips or tree tops.

"(Bio refineries) are going to make a whole slew of valuable products from transportation fuels to industrial chemicals, and paper will be the least valuable stuff that comes out of these things," he said. "So we&#39re trying to demonstrate that forests and forest resources are really important to the nation in our issues of global warming and energy dependency."

Timber harvest is generally seen as a means to produce lumber, but everything from resins and waxes to turpentine and vitamins also comes from wood. A myriad of everyday items are made from wood, including ping pong balls, aspirin, yeast, colognes, cigarette filtres, carpeting, and plastic sandwich bags, according to Rayonier, a forest products company.

"The easy fast money was getting (timber) logged," said Vaughan. "We live a long ways from anyplace. Transportation costs are an issue. What I would have liked to have seen is there having been more of a secondary instead of a tertiary, not even a tertiary, light manufacturing capabilities that never happened."

But the diversification strategy in Grays Harbor County is substantially different. The county houses a much larger manufacturing base than its neighbour to the north. It produces not only wood products, but also relies on fishing, food processing and ship building. The Grays Harbor Economic Development Council is seeking to attract technologically-innovative companies to take advantage of local resources.

"Our potential is untapped to support solid family-wage based industry," said Roger Milliman of the council. He listed lack of capital investment as the largest impediment for diversifying.

The twin cities are looking to improve their infrastructures to attract investors and businesses. And it may be working. Hoquiam with the self-given moniker of "friendliest city" has attracted renewable-energy company Imperium Renewables, which opened a 100-million-gallon bio-diesel plant in the community, the largest such plant in the nation.

Meanwhile, to the north, Forks is continuing to struggle to attract any kind of investors. The city has no seaport since it&#39s located about 24 kilometres miles from the coast and is far from a major urban centre.

"In the end we&#39re a natural resource dependent community," said Calhoun. "We have to rely on our basic competitive advantage which is our abundant natural resources. We just have to find a way to do it. It&#39s not going to be cutting old growth logs and shipping them to Japan, which was the heyday."

"If you want to sustain healthy human communities, you have to conserve the natural environment, and it has to be managed in a sustainable way, or else you end up not serving human needs," he said.