KITALE and ELDORET, Kenya, Mar 16 2008 (IPS) - With the new academic year in Kenya underway, teacher Moses Simiyu Kalenda is once again instructing children – just not in the place where he expected to be doing so. 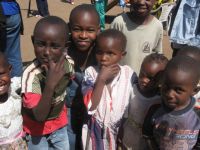 Some of the many children displaced in Kenya's post-election violence. Credit: Kwamboka Oyaro/IPS

Previously, he taught pre-schoolers at Kalaha Farm, some 400 kilometres west of the capital, Nairobi; now he works from a makeshift class in a displaced persons camp, both he and his pupils victims of the violence that erupted after the Dec. 27 presidential election.

Over a thousand people were killed and up to 600,000 displaced in the dispute over Mwai Kibaki&#39s victory in the poll; the opposition, led by Raila Odinga, claimed the ballot had been rigged. Last month, the two politicians signed a power-sharing agreement in a bid to ease tensions in the East African country.

With both his school and home razed, Kalenda sought refuge at a site in the western town of Kitale, along with many of those he had taught (some 1,350 teachers are believed to have been displaced, countrywide). Noting that education was not being provided for children at the start of the new term, he obtained help from the Kenya Red Cross with setting up a classroom in the camp and getting hold of teaching materials.

"I started teaching on January the 22nd. I combine children aged six to nine years; these children are at different levels, but we have to do with what we have. I keep them busy to ensure that when they go back to school they will easily catch up with their classmates," Kalenda told IPS.

His 36 pupils attend classes from 08.00 until 13.00; sitting on the ground, they learn a variety of subjects. Older children have joined schools in surrounding areas, while those who are younger are taken care of by two other teachers.

But even as lessons provide a note of normality in the lives of the children, the past continues to intrude, as in the case of Patrick Wanjala. He recently joined Giligal Academy, a short distance from the camp where Kitale teaches, along with 14 other children – all sponsored by the Red Cross.

"Because we are busy at school, I manage to push back the memories of what has befallen my family…but not for long. I get panic attacks, like last night when I dreamt that our attackers had struck again and killed my family," Wanjala told IPS.

"I am making the best of a bad situation, but honestly, I don&#39t know for how long I will hold on."

Jacob Mwambi is another pupil trying to make his way amidst the post-election difficulties. Before violence broke out, he was a student at Huruma Primary School in the western town of Eldoret. Now, he too has classes in a displaced persons camp – balancing his books on his knees rather than on a desk, and being taught by three teachers rather than the larger number who gave him lessons previously.

"I know I am missing out a lot in terms of learning. We are not given any homework, while this was the norm in my former school; but I am grateful to be alive and to have the voluntary teachers," he told IPS.

This camp school is also attended by Esther Wanjiku and Margaret Wambui, who became friends after joining on Jan. 14, the beginning of the school year (the start of the first term was postponed by a week in response to the post-election violence). Previously, they were enrolled in different schools.

"We went through very hard times. Our homes were burnt on a Sunday (Dec. 30). That evening saw my parents and other friends celebrate the announcement that Kibaki had won the presidential elections; (then) a creepy silence suddenly muted the festive mood before our neighbourhood burst into screams and everything started burning," Wambui told IPS.

The girls and their classmates have textbooks for mathematics and English, but not for other subjects. The class schedule is also not what it might be elsewhere.

"We are many in the &#39school&#39. Because of the number, some teachers teach in shifts – holding classes for some pupils in the morning hours while the rest study in the afternoon. Our teachers are volunteering," said Wanjiku.

There are approximately 5,000 children in the camp where Mwambi, Wambui and Wanjiku have taken refuge, most of them of school-going age; in all, the camp is currently said to house about 14,000 people.

Back in the Kitale camp, Kalenda says teaching has helped him cope with the trauma that ensued after the December ballot. "All of us here were busy with our lives. Then we found ourselves with nothing…You know, you can become suicidal – or even mad?"

Other instructors feel mounting frustration: earlier this month, teachers at the Eldoret camp went on strike to demand pay for having taught since January.