DHARAMSALA, India, Mar 14 2008 (IPS) - The soft glow of candles illuminated a sea of red-robed monks and nuns as they walked at sunset, followed by local residents and foreign tourists, as the sonorous sound of chanting filled the narrow main street of McLeod Ganj here in the home of the government-in-exile of Tibet. 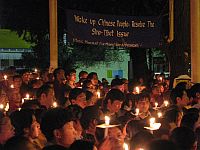 The candlelight vigil was held a day after over a hundred Tibetans launched their symbolic march back to Tibet – and while protests continued in Lhasa against Chinese rule.

The vigil here, the second this week, is just part of the many activities related to the commemoration of the 49th anniversary of the Tibetan uprising against China on Mar. 10.

It was this same anniversary that triggered protests in Lhasa by Buddhist monks, and the arrests of some of them fuelled larger protests that continue. On Friday night, some news reports say at least two people may have died in what are being described as the biggest protests in two decades.

Attacks are being targeted against ethnic Chinese shops and properties, a reflection of resentment against outsiders like the Han Chinese who have moved into Tibet over the decades under Beijing’s rule.

"We intend to have more peaceful demonstrations in the future to protest against the arrest of monks in Lhasa who were commemorating the Tibetan uprising on Monday and to demand their immediate release," said Dhondup Dorjee, vice president of the Tibetan Youth Congress and one of the five organisers of the march to Tibet.

The other four are the Tibetan Women&#39s Association, an association of former political prisoners called Gu-Chu-Sum Movement of Tibet, the National Democratic Party and Students for a Free Tibet, India.

According to reports, about 60 of 300 monks were arrested Monday for trying to march from Drepung Monastery to the 1,300-year-old Potala Palace in Lhasa.

Tibetans in exile are updated on events back home via a roving van with loudspeakers around McLeod Ganj.

In 1950, China sent military troops into Tibet, which it has long maintained is part of its territory. In 1959, it crushed an insurrection that resulted in the death of tens of thousands of people and the exile of Tibet&#39s spiritual leader, the 14th Dalai Lama, to India.

If successful, the six-month march by Tibetan exiles will reach the Chinese border in time for the Beijing 2008 Olympics in August. Organisers are mum about the exact location of the border they intend to cross.

On Mar. 10, Indian police stopped the marchers, and locals believe they will be detained for two weeks. Similar marches in the past have been stopped by Indian authorities.

The Tibet issue is a very sensitive subject for both India and China, which both have bilateral agreements on various levels.

"This is a great opportunity for us to present the injustices the Tibetans have been subjected to, especially during a time when China will be the centre of international attention," activist and march leader Tenzin Tsundue wrote in &#39Contact&#39, a free monthly community paper in Dharamsala, referring to the upcoming summer Olympics.

He said that the marchers will adhere to the spirit of non-violence and will be a &#39sadhana&#39, "a spiritual tribute to the truth and justice that we are fighting for, and our long march to freedom".

While there was no direct endorsement from the Dalai Lama, he nevertheless lent his presence and spoke before the marchers before they left McLeod Ganj.

Over the decades, the Dalai Lama has consistently called for China to grant Tibet autonomy but negotiations have always been quashed.

"The Dalai Lama&#39s stand has been very clear and that is to seek autonomy for Tibet and for the preservation of Tibetan culture, environment and religious freedom," said Dhondup Dorjee. "He also emphasises the need for every Tibetan&#39s right to demand for independence because it is our birthright, and he encourages us to struggle and fight for these rights."

The youth leader added that because a Tibetan&#39s identity is closely linked with religion, it is difficult for the monastic community to not react especially when Buddhism – "the very meaning of our existence" – is threatened. "When our culture and religion are in danger of annihilation, naturally these monks will react," he said.

According to Thupten Pema Lama, founding director of the Tsechokling Monastery in McLeod Ganj, there is no conflict between the calls for a &#39Free Tibet&#39 and the Dalai Lama&#39s &#39middle path&#39 solution, which is to seek autonomy for their homeland.

"We exercise democratic principles and people are free to express themselves. His Holiness&#39 point of view is to look for practical ways that will benefit Tibetans as well as the Chinese," he said.

Among the things he would like to see for both countries are the revival of Buddhism in China, economic development for Tibet, the declaration of Tibet as a &#39zone of peace&#39, environment protection, the freedom to practise Buddhism, and to preserve Tibetan culture and tradition.

But like his fellow Tibetans, Thupten Pema Lama dreams of the day when he would be able to set foot on Tibet.

Exiled Tibetans have expressed their support for the marchers, thus the candlelight vigils and the prayers for them.

"I think it&#39s one way to increase awareness of the issues surrounding Tibet and I am hoping that things will turn out peacefully," commented Dorjee, director for the Office of the Reception Centre that assists newly arrived Tibetan refugees.

Tashi Tsering, a young monk who fled from Lhasa in 1990, said of the march: "Personally, I think it&#39s an important step for the world to be aware of what&#39s happening in Tibet. While I myself did not choose to join the march, there are others who are fully capable of doing it and they have my support."

"Having a huge turnout in our mass actions sends a strong message to both China and India. We are hopeful that, in time, we will be able to get enough support from all over, which will help us go back to Tibet and we are ready to sacrifice our lives for this," said Dhondup.