US/IRAQ: "I Saw the Interrogator Waterboarding Him"

SILVER SPRING, Maryland, Mar 18 2008 (IPS) - "I would like to share with you how one goes about becoming a concentration camp guard without having made many decisions," 24-year-old former Guantanamo prison guard Christopher Arent told a crowd of hundreds at last weekend&#39s Winter Soldier gathering outside Washington, DC. 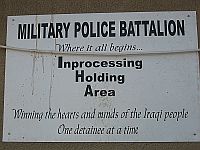 "I was 17 years old when I joined the Army National Guard," he said. "My family had just been displaced and I was living with friends. My family was poor, I was poor and I wanted to go to school. They promised me a significant amount of money toward that goal – funds I have yet to receive."

Arent explained that he was initially happy with the Guard, but that his mood changed when he was deployed to the U.S. military base at Guantanamo Bay, Cuba in 2003. There, he served in the detention operations centre of the prison, where he managed the movement of inmates from one part of the facility to another.

After serving a tour at Guantanamo, Arent told the assembled veterans that he believes the mere existence of the prison is torturous.

"I&#39ve heard a lot of speculation about what torture is considered," he said. "First and foremost, I would like to ask everyone whether living inside a cell for five years without ever seeing your family or your friends, without ever being told why you&#39re being held there – I consider that torture."

Arent was one of many former soldiers who served in U.S. military prisons abroad to speak at the Winter Soldier gathering. The event, which was organised by Iraq Veterans Against the War, aimed to show that their stories of wrongdoing were not isolated incidents limited to a few "bad apples", as the Pentagon claims, but were everyday occurrences.

Each veteran who spoke at Winter Soldier went through a detailed screening process before being allowed to testify. The process included providing Iraq Veterans Against the War with their military ID or discharge papers, and contacts of other soldiers they served with, who were then interviewed to verify the stories.

Former sergeant Domingo Rosas, who served in al-Qayim near the Syrian border from April 2003 to April 2004, told the assembled veterans he was ordered not to allow detainees under his watch to fall asleep.

"They were not allowed to sit down or lay down and anytime they started to doze off or they put their heads against the wall, I&#39d hit (the outside of their cell) with a pick axe handle and try to keep them up, keep them awake," Rosas said.

Rosas said he stood guard while interrogators tortured prisoners behind him.

"I witnessed one detainee rolling around in the mud being kicked again and again," he said. "I saw the interrogator pouring water on his face, waterboarding him. And another detainee was standing there with a bag over his head and was forced to carry a huge rock until he couldn&#39t do it anymore and collapsed. That image seared itself into my mind&#39s eye and I can&#39t forget it. I won&#39t forget it."

He spoke in detail about one prisoner, a diabetic Iraqi who was delirious and was not allowed to take insulin for days. Duffy said he asked his superiors if he could transfer the man to the hospital for treatment, but that his request was denied.

His captain said he "could not transfer the detainee and that [the man] could drink water," Duffy said. "She also said he probably wouldn&#39t die but that it wouldn&#39t matter anyway."

A few days later, Duffy said, the man died from lack of care.

In response to an inquiry by the Washington Post, a Pentagon official argued that such events are not commonplace as the veterans claimed.

"When isolated allegations of misconduct have been reported, commanders have conducted comprehensive investigations to determine the facts and held individuals accountable when appropriate," Lt. Col. Mark Ballesteros told the paper.

In response, Iraq Veterans Against the War released their own statement. "These service members&#39 and veterans&#39 testimonies are ultimately not about individual conduct, but about the nature of occupation," it read. "The military is being asked to win an occupation. The troops on the ground know this is an impossible task. Their commanders know this is an impossible task. "

"We&#39re asking the Department of Defence to stop saying that it can achieve the impossible," IVAW&#39s statement concludes. "We have a political problem that cannot be solved with a military solution. This is not a war that can be won. It is an occupation that can only be ended."

*IPS correspondent Aaron Glantz co-anchored Pacifica Radio&#39s live coverage of Winter Soldier 2008. You can find audio and images from the event online at the website www.warcomeshome.org.