US/IRAQ: "We Reacted Out of Fear, and With Total Destruction" 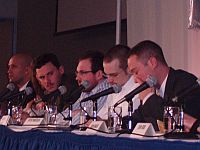 U.S. veterans speak out about indiscriminate shootings of civilians in Iraq and Afghanistan. Credit: Dahr Jamail/IPS

He ended up stationed in Fallujah, and then Baghdad. "We were the only authority and took full advantage of that," he told an audience of roughly 300 people here gathered for three days of testimony by veterans of the wars in Iraq and Afghanistan about abuses of civilians. "Everything was haji…haji house, haji smokes, haji burger."

The term "haji" is used by U.S. soldiers in Iraq to degrade and dehumanise the Iraqi people.

Viges, like others who spoke, said that U.S. troops routinely detained innocent people during home raids.

"We never went on the right raid where we got the right house, much less the right person – not once," he said.

He also said it was common practice for troops to take photographs as "war trophies".

"We were driving in Baghdad one day and found a dead body on the side of the road," Viges said. "We pulled over to secure the area and my friends jumped off and started taking pictures with it, smiling. They asked me if I wanted to join them and I said no, but not because it was unethical, but because it wasn&#39t my kill. Because you shouldn&#39t take trophies with those you didn&#39t kill. I wasn&#39t upset this man was dead, but just that they shouldn&#39t be taking credit for something they didn&#39t do. But that&#39s war."

The event, which has drawn international media attention, was organised by Iraq Veterans Against the War. Its goal is to give U.S. service members a chance to talk about their experiences during the occupations of Iraq and Afghanistan, and to show that their stories of wrongdoing in both countries were not isolated incidents limited to a few "bad apples", as the Pentagon claims, but were everyday occurrences.

Adam Kokesh served in Fallujah beginning in February 2004 for roughly one year. Speaking on a panel about the Rules of Engagement (ROE), he held up the ROE card soldiers are issued in Iraq and said, "This card says, &#39Nothing on this card prevents you from using deadly force to defend yourself&#39."

Kokesh pointed out that "reasonable certainty" was the condition for using deadly force under the ROE, and this led to rampant civilian deaths. He discussed taking part in the April 2004 siege of Fallujah. During that attack, doctors at Fallujah General Hospital told IPS there were 736 deaths, over 60 percent of which were civilians.

"We changed the ROE more often than we changed our underwear," Kokesh said. "At one point, we imposed a curfew on the city, and were told to fire at anything that moved in the dark. I don&#39t think soldiers should be put in the position to choose between their morals and their instinct for survival."

Kokesh also testified that during two cease-fires in the midst of the siege, the military decided to let out as many women and children from the embattled city as possible, but this did not include most men.

"For males, they had to be under 14 years of age," he said. "So I had to go over there and turn men back, who had just been separated from their women and children. We thought we were being gracious."

The Mar. 13-16 event has been named "Winter Soldier" to honour a similar gathering 30 years ago of veterans of the Vietnam War. Winter soldiers, according to U.S. founding father Thomas Paine, are the people who stand up for the soul of their country, even in its darkest hours.

Iraq Veterans Against the War was founded in 2004 to give those who have served in the military since Sep. 11, 2001 a way to come together and speak out against what they say is an unjust, illegal and unwinnable war. Today, IVAW has over 800 members in 49 states, Washington, D.C. and Canada and on military bases overseas.

Steve Casey served in Iraq for over a year, from mid-2003.

"We were scheduled to go home in April 2004 but due to rising violence, we stayed in with Operation Blackjack," Casey told the audience. "I watched soldiers firing into the radiators and windows of oncoming vehicles. Those who didn&#39t turn around were unfortunately neutralised one way or another – well over 20 times I personally witnessed this. There was a lot of collateral damage."

Jason Hurd served in central Baghdad from November 2004 until November 2005. He told of how, after his unit took "stray rounds" from a nearby firefight, a machine gunner responded by firing over 200 rounds into a nearby building.

"We fired indiscriminately at this building," he said. "Things like that happened every day in Iraq. We reacted out of fear for our lives, and we reacted with total destruction."

Hurd said the situation deteriorated rapidly while he was in Iraq. "Over time, as the absurdity of war set in, individuals from my unit indiscriminately opened fire at vehicles driving down the wrong side of the road. People in my unit would later brag about it. I remember thinking how appalled I was that we were laughing at this, but that was the reality."

Hurd expressed what the over 200 veterans in the room appeared to agree with.

"We&#39re disrupting the lives of our veterans with this occupation, not only the lives of Iraqis. If a foreign occupying force came here to the U.S., do you not think that every person that has a shotgun would not come out of the hills and fight for their right for self-determination?"

To rousing applause, Hurd ended his testimony with, "Ladies and gentlemen, that country is suffering from our occupation, and ending that suffering begins with the total and immediate withdrawal of all of our troops."

Video and photographic evidence will also be presented at the event, and the testimony and panels can be viewed live on Satellite TV and over streaming video on ivaw.org.