BOSTON, United States, Mar 7 2008 (IPS) - In 2001, Dr. Henrietta Edmonds made a startling discovery during a rare expedition in the frozen arctic: Smoky, particulate-rich plumes of hot water swirled 3,000 metres under the ice – a sign of hydrothermal vents on the sea floor – and lots of them. 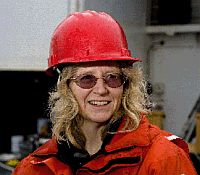 Hydrothermal vents are underwater geysers heated by magma that create mounds of minerals and sustain unique organisms, like the giant tube worms found in the Pacific. Since the 1970s a race has been on to find them.

“I said, it can’t be. But then I kept seeing them over the next few days,” Edmonds, a marine geochemist and professor at the University of Texas, told IPS.

Edmonds is one of many women today who have chosen to be field scientists – modern-day explorers. Not content to spend all their time in a quiet laboratory analysing data, they get out in the field’ and collect their own.

Last year, Edmonds decided to return to the Arctic on a 40-day expedition of 40 international scientists aboard the Swedish vessel, Oden, to further explore the vents on the sea bottom.

“I thought for a minute about my teaching schedule. And then I said, I have to go,” Edmonds said.

Last year’s trip was not as successful at locating vents but no doubt, Edmonds will go back and try again.

“I love the Arctic. The sense of exploration is really exciting,” Edmonds said.

And the weather isn’t bad, either, Edmonds believes. “In July and August it’s remarkably comfortable, 20’s F and 30’s,” she added.

A bit further south, in the Chukchi Sea, just north of the Bering Strait and 100 miles offshore, is where marine ecologist Jackie Grebmeier and her team travels each May aboard a Canadian ice breaker.

“In March, April and May the sun is coming back but there is a lot of ice around. We need the ice breakers,” Grebmeier, of the University of Tennessee, told IPS.

There, she studies ecosystem changes due to climate warming.

This region of the Arctic is basically changing into a sub-Arctic climate, she said. The ice is melting earlier in the spring and not as much of the sea is remaining covered. The temperature of the southern Bering Sea has increased 1-2 degrees C, bottom and top, Grebmeier said.

“It’s a shallow water system and it’s one of richest feeding areas of the world, for us [humans] and mammals,” Grebmeier said. “If you don’t have any ice, there is not as much food.”

“It depends on your viewpoint but as an ecologist it’s a big system change and there are ramifications,” that are not good for animals and plants.

Once the vessel reaches her mooring in the Chukchi, it drops anchor so that Grebmeier can lower a line into 75 metres of water.

“We lower it down with a winch on a stainless steel chain, like a train wheel.” Instruments are attached to the line, and they take temperature, salinity and other readings throughout the winter, under the ice.

“So we know every day, day and night, every season what’s going on,” she said.

Her research focuses on the sea floor, where the rich “benthic” layer of sediment is home to worms, clams and other creatures.

The benthic animals are near the bottom of the Arctic food chain, and as their food supply of planktons is harmed by melting sea ice and climate change, they starve and the larger animals, like diving ducks and seals, that depend on them become stressed too, Grebmeier has learned.

“The Eider duck is a threatened species, and they have declined further over the past decade. Our hypothesis is their prey base has declined, the clams,” she said.

It appears that “there is not enough food for the clams,” due to changes in plankton, Grebmeier said.

The region used to have a large king crab population. More recently, snow crabs from the south have moved in and overtaken the population.

Gray whales and walruses have changed their habitats to adjust to ice that melts too early, and food that eludes them. The whales have moved north for shrimp. Meanwhile fish that like a sub-arctic climate are making the Arctic their home, Grebmeier said.

As the ice melts it is adding warm, fresh water to the Chukchi, Grebmeier said.

Researcher and veterinarian Zoë Jewell tracks endangered rhinoceros for a living, and her work takes her deep into the bush in southern Africa, Cameroon and Borneo. By keeping an accurate count of the animals, she can lobby governments and preservation groups to fund better protections, like fencing or armed guards.

“We hold the key to unlocking this funding,” said Jewell, co-founder of Rhinowatch of Zimbabwe. “This is a last-ditch effort.”

There are only 18,000 total rhinos in the world, including just 2,600 black rhinos, which are known for their aggressiveness.

Jewell relies on a method of tracking animals that is completely non-invasive – and that she invented, called Wildtrack. Her teams photograph the footprints of the animals, and each one is unique to a specific animal. Using computers to analyze the photos, she is able to identify and track individual rhinos.

Members of her team include the San, or Bushmen, an indigenous people of southern Africa who are expert trackers.

On the Southeast Asian island of Borneo, she and her team are tracking the extremely rare Sumatran rhino. There are only about 30 of the rhinos left, and they “are very, very elusive,” Jewell said.

The rhinos live in small bands in dense jungle, where they eat fruit, leaves, twigs, and bark.

“It’s a three-day trek to get to them through the jungle from base camp,” Jewell said.

The challenge will be to get good footprint images from an often dark, muddy, jungle substrate, but initial trials suggest this is possible, according to her website.

Don’t expect to find Betsy Colburn, an aquatic ecologist in Massachusetts, at home during spring evenings.

Colburn studies vernal pools, large, temporary puddles that form in the woods each spring during heavy rains, and usually dry up in summer. The pools teem with insects and breeding salamanders and frogs, and are essential for a healthy forest ecosystem.

She knows 14 of these pools in Massachusetts extremely well. She has been studying them and the mites, kadis fly larvae and dragon flies that live in them for five years. The pools are most active at night, especially rainy nights.

How does one study tiny caddisfly larvae in a pool, in the dark and rain?

“You go into a pool with a dip net, sweep in moss and dump everything in a bucket. They sort of glue themselves to the moss with silk. Sometimes you can see them,” Colburn told IPS.

Much of the forested land in Massachusetts is not protected and so is threatened by development of malls and houses. Colburn supports the broad citizen effort underway to save pools.

“I don’t think saving salamanders will cure cancer. But it makes our lives richer. And it reflects on us if any of the rich wonder of the world is lost,” she said.