ENVIRONMENT-MEXICO: Biodiversity for Sale on the Streets

MEXICO CITY, Apr 12 2008 (IPS) - Trafficking of wildlife in Mexico is threatening to drive many species to extinction long before 2030. Nevertheless, the government believes by that year Mexico will remain one of the world’s five most biologically diverse countries. 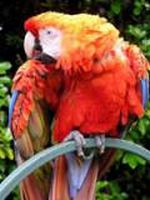 Half of the 22 species of multicolour and green parrots are in danger of extinction, and just 300 mating pairs of scarlet macaws (Ara macao) remain, according to official documents. But these birds are sold at markets in the capital and other Mexican cities, almost in plain view.

“We can get any rare animal for you,” Germán, who runs a four-square-metre vending stall at the Sonora market in the capital, told this reporter.

The vendor, who didn’t give his surname, has cats and dogs and canaries for sale, and behind a screen an eagle for 200 dollars, and a murky aquarium with dozens of small yellow frogs, with a price tag of five dollars each.

What Germán is hiding are wild animals that are in danger of extinction, the sale of which is punishable by one to nine years in prison. But he sells anything, legal or not: tarantulas for nine dollars, spider monkeys for about 1,000 dollars, and a black iguana for 350 dollars.

Illegal trafficking in wildlife is a serious crime, but “nobody has reliable figures” to determine the scope of the problem, José Ramiro Rubio, assistant director of the federal prosecutor’s office for environmental protection, Profepa, told Tierramérica. Rubio points out that Profepa has just 500 inspectors and that each one, for a monthly salary of 750 dollars, has to monitor species trade, logging and general compliance with environmental regulations.

Earmarked for the protection of wild animals from trafficking, “at most our yearly budget reaches one million pesos,” or about 935,000 dollars, he said.

“We don’t have the capacity to deal with problems of this magnitude. We would need an army. The issue is complex because of the size of the Mexican territory (1.9 million square kilometres) and its rich biodiversity,” according to Rubio.

Mexico is one of the 15 members of the Group of Megadiverse Countries, created in 2002 by the nations that together account for 70 percent of the earth’s diversity of fauna and flora. The others are Bolivia, Brazil, China, Colombia, Costa Rica, Ecuador, India, Indonesia, Kenya, Malaysia, Peru, the Philippines, South Africa and Venezuela.

Although no official figures are available, the authorities estimate that species trafficking in Mexico is third only to drugs and arms trafficking.

Each year, Profepa seizes between 15,000 and 23,000 animals captured illegally, or about to leave the country or to be sold within Mexico, and arrests around 50 people per year for related crimes.

Mexico’s vast territory, with the Atlantic to the east and the Pacific to the west, and with many routes out of the country, makes it difficult for inspectors to halt local and international trade in wildlife species, says Rubio.

However, Profepa has identified some 60 sites in the capital and in the central cities of Guadalajara and Puebla where trafficking is a serious problem.

In the south and east, where Mexico’s jungles are found, illegal wildlife trade and hunting are especially harmful to jaguars, songbirds and ornamental birds, wild boars, spider monkeys and howler monkeys, crocodiles and other reptiles, as well as plants, including rare orchids.

In northern and central Mexico the species targeted for trafficking or illegal hunting are deer, mountain goats and lynx, as well as puma, macaws, aquatic birds, orchids, palms and cactus.

Parrots and other such birds are on the verge of disappearing as a result of trafficking, said María Elena Sánchez, president of Teyeliz, a non-governmental organisation that fights this crime.

For every animal that reaches the hands of a buyer, it is estimated that another four die during capture or transport, and in addition the birds’ nests and eggs are often destroyed, Sánchez told Tierramérica.

An extensive investigation published in 2007 by Teyeliz and Defenders of Wildlife in Mexico warns that in 10 to 15 years many species will have disappeared forever from this country.

For the vendor in the Sonora market, it is not difficult to avoid the Profepa inspectors. “They don’t come by very often,” said Germán.

The tents with animals for sale in this street market cover some 400 square metres. Dozens of parrots, parakeets, doves, and turkeys are kept in small cages. Also for sale are cats and dogs, iguanas and other lizards.

But most of the sellers say they can get just about any animal – even in a few minutes – as long as the buyer puts some money down up front.

The head of Teyeliz is calling for more inspectors and a bigger budget. Though she admits that “more than an army, what we need is to educate consumers not to buy endangered animals.”

The government has never carried out an educational campaign on this issue. But Teyeliz and other groups aren’t going to wait around – with whatever resources they can get, they’re planning to launch an awareness raising campaign this year, said Sánchez.