FILM-CUBA: Women ‘Invisible’ Behind the Cameras

HAVANA, Apr 4 2008 (IPS) - Filmmaking has not escaped the overwhelming “machismo” of Cuban society. Getting a foot in the door in the industry, an almost exclusively male preserve, is still wishful thinking for most women directors. 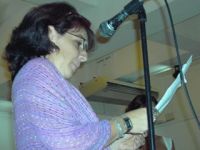 In the five-decade history of the state Cuban Institute of Cinematographic Arts and Industry (ICAIC), only one feature-length fiction film has been entirely directed by a woman: “De cierta manera” (One Way or Another), by Sara Gómez (1943-1974). Her work was considered defiantly critical and controversial, and is hardly known outside academic circles or the world of film critics.

Filmmaker Rebeca Chávez is now in the final stages of editing “Rojo vivo” (Red Hot), her film inspired by the armed struggle against the dictatorship of Fulgencio Batista (1952-1959) in the city of Santiago de Cuba, 850 kilometres east of Havana.

Danae Diéguez, a professor at the Faculty of Media, Communication and Audiovisual Arts of the Cuban Higher Institute of Art (ISA), has devoted special attention to the study of women’s participation in local filmmaking, where “political will has not been enough to eliminate machismo and the patriarchal culture.”

Diéguez, who is writing her doctoral thesis on “Women Behind the Lens: Cuban Films Directed by Women,” told IPS correspondent Dalia Acosta in an e-mail interview that it is both a cultural and economic phenomenon.

IPS: In your essay “On Women’s View of Violence” you said that many women directors in Cuba suffer from invisibility. Why do you think that is?

DANAE DIÉGUEZ: Firstly, there are very few women filmmakers compared to the number of men. The statistics count for something, but they are not the most important factor. There could be equal numbers of women and men, with the women still reproducing patriarchal patterns.

The key, in filmmaking, would be access on equal terms, with that equality of opportunity leading to drawing up a film project, presenting it and carrying it out.

The other thing is that filmmaking has historically been a man’s world. Women took care of other things, such as costumes, make-up, and in the best-case scenario, editing, but very rarely did they direct.

Then we must add that although film is art, it’s also an industry. I can sit at home alone to write a novel, and I just write it, but the world of film makes the whole creative process more complex, because of the broad infrastructure. So we’re talking about an obvious cultural phenomenon that is also economic in nature.

Combine both elements, and you get what probably prompted Cuban filmmaker Mayra Vilasís to say “it’s easier for a woman to become an airline pilot than a film director.”

Within ICAIC, apart from Sara Gómez, no woman has been able to make a feature fiction film. We had to wait for “Mujer transparente” (Transparent Woman) in 1991 to see fiction stories by three women directors (who worked as a team with two men). So women have produced documentaries, which are different from fiction and tend to reach a narrower audience.

Other female directors have emerged, outside the structure of ICAIC. Although some of them have matured over time and have a very extensive track record, they have remained outside the centre that legitimises filmmaking on the island.

I won’t make a list of names because it would be unfair if I forgot someone, but for example Teresa Ordoqui directed a 16 millimetre feature-length fiction film at the Television Film Studios in 1989. It’s called “Te llamarás Inocencia” and took an interesting cinematographic approach, but has hardly been talked about, if at all.

Another important reason why there are more women in the field is the move to video, a medium that “democratises” filmmaking. This is a key factor for women who found celluloid a barrier to self-expression.

IPS: Do you think that there is a specific woman’s view, based on gender awareness, in Cuban filmmaking?

DD: I don’t think so. There are particular moments when one could speak of a female perspective, in feature-length films as well as in documentaries, but it is not present as a consistent style. I am speaking of all Cuban films, made by men and women alike, because a man can take a feminine approach, and vice versa.

Being a woman does not necessarily mean having a gender perspective, nor does having studied women and their achievements necessarily mean that one has gender awareness, which encompasses many other things. The fact that I, as an academic, or another person as a critic reads, studies and writes about the issue, is a separate matter.

IPS: In your opinion, why is gender-based violence a recurrent topic in the most recent films by young Cuban women directors?

DD: It’s one among many issues that the younger generation is dealing with. When I study a body of works directed by women, I find recurring themes, and that helps me systematise them and make them visible, which is my primary goal.

Gender-based violence has also become more visible in our society, and in the world in general. Cuba has special features in this respect.

For my generation, born in the 1970s, the world was different. We didn’t see violence as something close to us, but as outside of us. The 1990s changed things, and in recent years violence and its different manifestations have been talked about more openly. Lizette Vila, a director who has been including the topic in her documentaries for some time, did not address the subject of battered women in Cuba until 2007.

As Cuban historian Julio César González Pagés has said, “the main manifestations of violence are those that men exercise over women, over other men, and over themselves.”

Young women live in this world, and look at it with their creative vision, and there are no answers, only questions that are evident in their films, related to the cycle of violence and its acceptance as normal. This is something that has drawn my attention in the works directed by women.

IPS: What contribution have films directed by women made – and may yet make in the future – to Cuban cinematography, in terms of their purely aesthetic dimension as well as in their social resonance?

DD: Their contribution is not in aesthetic terms, although there are interesting moments in some of them. This should be studied in more detail. I have not tried to verify whether or not they define a particularly female aesthetic angle, or if they simply produce images that are resistant to patriarchal culture.

In the world of filmmaking, gender equity will not be achieved until women have the opportunity to carry out their projects.

Recently, at the Seventh Exhibition of Young Filmmakers, thanks to the sensitivity and intelligence of the organisers, we put several items on the ICAIC agenda, including the question of women directors of photography. Cuba has many of these, some of whose work is of very high quality, who have not been able to break into the industry simply because they are women.

Times have changed, technology has made equipment lighter, film schools exist and with a camera in hand great things can be achieved, even outside the industry. This year’s exhibition showed, among other things, the increasing quality of the youngest women, and the themes they film, which are often related to the world of women.

This is the way things stand. Now it is up to those who make and carry out the decisions in our institutions to take gender equity seriously as the necessary path to greater justice.