ASUNCIÓN, Apr 20 2008 (IPS) - Former Catholic bishop Fernando Lugo was elected president in a landslide victory Sunday in Paraguay, putting an end to 61 years of rule by the Colorado Party. 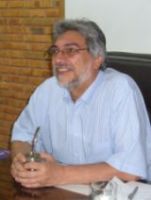 With 52 percent of the ballots counted, the presidential candidate of the centre-left Patriotic Alliance for Change (APC) took 40 percent of the vote against the 31 percent garnered by governing party candidate Blanca Ovelar, who ceded defeat.

Five exit polls had previously indicated that Lugo, known as “the bishop of the poor”, was three to six percentage points ahead of Ovelar, the first-ever female presidential candidate of the National Republican Alliance, better known as the Colorado Party.

“We have written a new page in the political history of our nation, and I hope we can all celebrate together,” Lugo said in a press conference, although without declaring himself the winner.

“We are convinced that the people of Paraguay have a right to better conditions. We have felt it in the pain and the tears of so many mothers, the disenchantment of so many young people and the suffering of so many children,” he said.

“I call on the political class as a whole to stake their bets on the country, which was once great, and which we believe will be again,” he added.

Despite fears of fraud and possible disturbances, the elections went smoothly, with the exception of a few isolated incidents, according to local authorities and international election observers.

Because of Paraguay’s lengthy history of dictatorships, coups d’etat and election irregularities, hundreds of international observers were in Paraguay for Sunday’s election, including delegations from the Organisation of American States (OAS) and the International Foundation for Election Systems (IFES), whose mission was led by former Colombian president Andrés Pastrana.

“The panorama is one of complete normality, with a few minor incidents. The high turnout was outstanding. I congratulate the people of Paraguay for their civic spirit,” said former Colombian foreign minister María Emma Mejía, head of the OAS delegation.

The initial estimates point to 75 percent turnout in Sunday’s polls, in which voters elected a new president and vice president, 45 senators, 80 members of the lower house, 17 governors, 214 provincial lawmakers, and 18 members of the Mercosur (Southern Common Market) Parliament.

Scuffles broke out in a few polling stations between members of the Colorado party and supporters of the opposition, leading to intervention by the police and prosecutors. However, no serious violence was reported.

The only irregularities were a few polling stations that opened late, reports of several people who tried to vote twice, and violations of the ban on publishing poll results.

But the Supreme Electoral Court reported that the system functioned perfectly, in a climate of “total normality.”

Lugo, who left the priesthood in 2006 to launch his political career, emerged from APC campaign headquarters with a Paraguayan flag wrapped around his shoulders, giving a double thumbs-up.

He told his loudly cheering supporters: “This is the Paraguay I dream of, of many faces and many colours” – an allusion to the coalition that backed his candidacy, made up of 10 political parties and 20 social organisations, trade unions and small farmers’ associations.

Thousands of Paraguayans filled the central avenue of Asunción Sunday night to celebrate the fall of the Colorado Party, which has governed Paraguay for six decades, including 35 years of dictatorship under General Alfredo Stroessner (1954-1989), who died in Brazil in 2006.

Even before Ovelar acknowledged defeat, voices within the Colorado Party began to speak of the need to “renew” the party.

The most biting remarks came from former vice president Luis Castiglioni, who claimed to be the victim of fraud when he lost the Colorado primaries to Ovelar in December 2006.

After casting his ballot, Castiglioni said that “after tonight, Vanguardia Colorada (his faction) has become the real Colorado Party.”

He said the people had evolved more than the party leadership. “People want us to care about their lives,” he said.

“Many politickers live well and concentrate on accumulating fortunes,” he said. “That happens especially in my party, which suffers from a serious infection. With the help of honest people, we are going to cure the ANR.”

In response to Castiglioni’s remarks, the president of the Colorado Party, José Alberto Alderete, who is close to President Nicanor Duarte, commented angrily to the press that the party’s conduct tribunal would study the measures to be taken against the former vice president.