Q&A: "Between Implementation and Planning, There Is a Disconnect"

NAIROBI, Apr 20 2008 (IPS) - Accounting for about a third of the gross domestic product in sub-Saharan Africa, agriculture clearly plays a significant role on the continent. But, figures only tell part of the story. A review of Africa produced under the International Assessment of Agricultural Science and Technology for Development (IAASTD) notes that agriculture is also "woven into the fabric of most societies and cultures in the region." 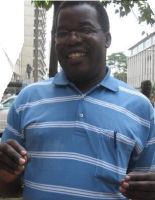 In addition, the sector requires urgent attention if it is to help Africa move beyond the malnutrition and poverty that define existence for many of its inhabitants.

The IAASTD throws light on ways in which this might be done. During the three-year undertaking, agricultural knowledge across the board was evaluated to help determine how the sector can be managed more effectively and sustainably.

Five regional reports – including the survey for sub-Saharan Africa – and a synthesis document were produced by the hundreds of contributors to the assessment, which sought the views of governments, civil society, the private sector and academia. The findings of the IAASTD were formally presented earlier this month.

Washington Ochola is one of the authors of the sub-Saharan review, and also a senior lecturer in sustainable agriculture and rural development at Egerton University, east of the Kenyan capital, Nairobi. IPS East Africa correspondent Kwamboka Oyaro met him recently to talk about the IAASTD&#39s efforts to piece together a picture of the current state of agriculture in Africa.

IPS: What were the main challenges faced in compiling the assessment for sub-Saharan Africa?

Washington Ochola (WO): There were challenges in sustaining both individual and institutional commitment to the process. People got committed substantially because of their interest in sustainable agriculture for development. While governments (in developed nations) supported our colleagues from the West, we got our financial support from donors and this affected full participation of experts, particularly from Africa: they had other commitments.

We also had a conflict of professional ideas because we come from different professional backgrounds – social economists, soil scientists, extension of technology transfer experts etc; we perceive various aspects of agricultural science differently. We also define terminologies differently. But we worked together and came up with a common glossary.

Science&#39s own dynamism was a big challenge. New research findings keep coming up. The process took three years and we kept monitoring new ideas and harmonising. Ours was not the only assessment taking place at the time and we kept tabs on what was happening to avoid duplication.

Accessing contentious and inconclusive scientific aspects such as the use of bio-fuel was intricate; there is a conflict between agricultural crop production for food or for bio-fuel. This is still unresolved in regard to which direction technology will drive production.

IPS: Desertification, frequent reports of crop failure due to drought, the devastating effects of HIV/AIDS on farmers and several other factors can paint a depressing picture as regards agriculture in Africa. But, the assessment notes that there have been successes concerning agricultural knowledge, science and technology. Which of these are most significant?

WO: Egypt is a good example of where local level knowledge has been used for intensive agricultural production. Despite its harsh climatic conditions, the country has been able to harness and successfully use the Nile basin for agriculture.

In Botswana, communities along a river delta have come up with local management strategies which encourage intensive production and at the same time protect the environment.

There are other success stories in Congo and Uganda where agricultural knowledge and technology are helping farmers to beat the effects of desertification, crop failure and HIV/AIDS.

IPS: On the all-important matter of fertilizers, the assessment speaks of an African Union (AU) resolution to increase fertilizer use in several ways – including cost reduction through regional procurement, and the elimination of tax on chemicals. Are the various elements of this resolution being put into effect with sufficient vigour and commitment?

WO: We are talking not only of chemical fertilizers, but also organic. The former have side effects, including heavy costs – globally, the cost of fertilizer is increasing. Using fertilizer must be accompanied by knowledge of soil and fertilizer management. Sadly, this is not the case.

Elimination of tax on chemicals has not been effected in Africa, despite the AU resolution. We have seen a bit of that in Kenya, but this was due to post-election violence because many farmers&#39 properties were destroyed and (they) couldn&#39t afford the fertilizer.

IPS: With only four percent of agricultural land in sub-Saharan Africa irrigated, it&#39s clear that we have some way to go on this matter – an issue that you raise, while pointing out that small, rather than large-scale, irrigation methods may be key to addressing the needs of the region. What other parts of the world have shown the way with small-scale irrigation?

WO: Africa hasn&#39t reached its full potential in irrigated farming…Through policies and advancement of technologies, small-scale irrigation could be key to sustainable agriculture.

East, West and Central Asia and North Africa have succeeded in small-scale irrigation. At community level, they are doing small-scale irrigation through appropriate but cost-effective technology. They have community fallowing, flooding and even simple bucket irrigation. Water governance is the most important aspect. The farmers come together and form management committees to ensure water is appropriately used.

IPS: On the matter of research, the assessment indicates that the traditional method of implementing findings has been effective for large cash crop operations, but less so for smaller, diversified farms. Why is this?

WO: This is because the small-scale farmers have unique circumstances: many of them lack resources and deal with a number of enterprises within their small farms. The traditional approach to extension work is better suited for single commodity or cash crops.

The cash crop farmer benefits through economies of scale while the small-scale farmer will need several experts to deal with the various crops and animals, which is more expensive. For example, a farmer with a lot of diversified, intensive farming on a small scale will have to get in touch with extension workers for each of his or her independent enterprises such as cows, chicken, beans, cassava, maize or any other – while the large-scale farmer will deal with only one expert with information on commodity research, development, production increase and marketing.

Technologies are also…disseminated to designated large scale farmers. They are able to purchase the technology.

IPS: How, then, should the traditional methods of putting research findings into operation be changed?

WO: We need diversification, integration and a multi-sectoral approach to extension work. This will enable small-scale farmers to access new developments immediately instead of waiting for the expert in that area to explain in the future.

IPS: The assessment notes that the government departments which manage the various aspects of agriculture often do so in isolation of each other. Why is developing a more integrated and efficient way of management taking so long to put in place?

WO: It means change, and change comes with a lot of resistance. Development planning and monitoring have remained sectoral. Between implementation and planning, there is a disconnect…It is a policy issue and policies take long to change and effect. But African governments are attempting to integrate this.

IPS: The report also highlights frequent linguistic divides between government services and the citizens they serve, and the way in which this narrows the possibilities for bringing together formal science and traditional know-how. Can you give a few examples of this?

WO: Agriculture production in some indigenous areas is really good. There have been wars in the Central African region but rarely do we hear of famine in those countries. Why? The traditional agricultural technologies they use are rich, but because of language and our lack of responsiveness we are unable to harness this local technology. Science has failed to capture this knowledge in appropriate language, package and disseminate it to farmers.

IPS: The assessment makes several observations concerning factors that impede the progress of women farmers, indicating the need for legal reforms to secure women&#39s access to land – and noting that more than 80 percent of extension workers in sub-Saharan Africa are men who cannot or will not deal with women because of cultural factors. Which countries on the continent have chalked up notable successes with battling these problems – and why were they successful when other, comparable African states were not?

WO: Gender is a complex aspect that agriculture must address. Historically, African women produced more labour and food, yet they have gained little from land. Kenya has attempted to address this issue. The Ministry of Livestock recently released a documentary on challenges women face in arid areas. Civil societies are active and they send women extension workers to meet the farmers.

Elsewhere in Africa, major land reforms sweeping across the continent are also addressing this segment. In the Congo basin women have been included in making important decisions on agriculture. Many African countries have gender ministries, and even within agricultural and livestock ministries there are gender desks. This shows that awareness…may soon lead to success in solving these problems. But it is a tall order. The African gender problems can&#39t be solved through a blanket solution.

IPS: What were the main findings concerning the use of genetically modified crops in Africa?

WO: Sub-Saharan African countries are at different stages of implementing the use of GMOs (genetically-modified organisms) to improve agricultural production. The tissue culture aspect is popular among some farmers. We found out that there is a lot of potential for use of GMOs, but it is still constrained by different approaches and policies which are at different levels in the sub-continent.

Some aspects of GMOs have also not been clarified, especially the health-related aspect; (for GMOs) to be adopted, it must be made clear there are no critical environmental problems. Many people fear the use of GMOs simply because issues surrounding them haven&#39t been clarified.

Scientists too have not agreed on how GMOs can contribute to food security. Our finding is that they can; but they must be harmonised in regard to policy and assessment of their effects on the environment and human health. The standards must also be acceptable to neighbours, because of cross-border trade and globalisation.