HANOI, Apr 10 2008 (IPS) - Nguyen Trung Thanh sits on a blue plastic stool in Cho Mo Market, in Hanoi’s Hai Ba Trung district. A rice seller for the past 10 years, he has seen no recent drop in custom, despite recent price hikes. ‘’But the buyers really complain so much,’’ he tells IPS. 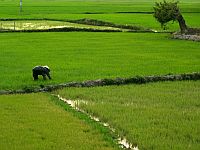 Large plastic tubs in the stall behind the dealer, offering different types of rice, ranging in price from 7,000 VND (0.43 US dollars) per kg to 15,000 VND (0.93 dollars), seem to refute any shortage of the staple.

But the cost of rice has gone up by 20 percent since the beginning of the year and it is now selling at 740 dollars per tonne domestically. This coupled with Vietnam’s soaring inflation has people worried, but not panicky.

Vietnam, a major exporter, is now expecting a bumper third winter-spring crop in its southern Mekong region, an area which produces 58 percent of the world’s rice. This is good news given the past year’s losses due to bad weather.

Late March, Vietnamese Prime Minister Nguyen Tan Dung ordered authorities not to sign any more rice export contracts for the remainder of the year. Vietnam has already signed contracts to export some 3.5 – 4 million tonnes of rice this year, while last year it exported 4.5 million tonnes.

The ban on the signing of new export contracts has been attributed to a desire to shore up domestic food security.

On Wednesday, Jacques Diouf, director-general of the United Nations Food and Agriculture Organisation (FAO), told reporters in New Delhi that restrictions on rice exports by the world’s major producers had contributed to the demand and the consequent price hikes. But Diouf added that it was only natural for countries to protect their own national interests.

However, analysts are more inclined to point fingers at Vietnam’s inflation rates – the highest in Asia – and the fact that domestic prices nowadays follow global prices.

"Vietnam is limiting export to drive a wedge between domestic and foreign prices," says Jonathan Pinkus, senior country economist for the United Nations Development Programme (UNDP). "If sellers have to sell on the domestic market the price comes down. Vietnam doesn’t have a supply problem, it has a price problem."

Vietnam’s inflation stood at 9.2 percent for the first quarter of this year alone. Local media reports say that the price of pesticides has gone up by 75 percent, helping to drive up the price of rice. Fuel prices have also gone up.

"People are not starving to death but there are definitely difficulties," says Irja Sandberg, an International Federation of the Red Cross (IFRC) representative. Thanks to the cold spells and price increases the Red Cross, both local and international chapters, have upped rice supplies to families in need. The initiative began after Typhoon Lekima. "We have seen that the situation is not solved," says Sandberg. "They have suffered even more from the cold spell."

Vietnam is the world’s second largest rice supplier, after Thailand. Vietnam, in fact, produces more rice than Thailand – 38 million tonnes against Thailand’s 29 million tonnes. Rice is a staple food in Vietnam and consumption is typically higher in poorer rural areas than in the wealthier urban centres.

"I don’t think we’re in a crisis in Vietnam. (But) there’s a lot of concern about the impact of rising prices on the poor," says Pinkus.

"The problem is that salaries haven’t increased enough," Dam Thi Sinh, 62, told IPS while shopping for her family of five at Cho Mo. "We have to buy less than we did before and reduce how much we eat."