BIODIVERSITY-US: Loggers, Owls Not Out of the Woods Yet

SEATTLE, May 9 2008 (IPS) - Some wounds heal slowly, and the wounds of the logging community on the U.S. northwest Pacific coast are still smarting nearly 20 years after measures to protect a threatened species devastated their industry. 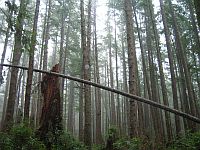 "All of our public institutions that were supported by this economic activity began to crumble," said John Calhoun, director of the Olympic National Resources Centre, an entity created by the Washington State legislature that brings together industry, environmental, government and native groups to forge sustainable forest and marine policies.

"It was devastating not only economically, but it was devastating philosophically," Calhoun told IPS, "and it was a depression in people&#39s attitude, about the world being turned upside down for reasons they couldn&#39t understand or agree with."

The bane of the logging community came in the form of the northern spotted owl, which in order to breed successfully and collect enough food for its offspring, requires thousands of acres of the unique ecosystem created by old growth forests.

Large clear-cut harvests caused the owl&#39s population to dwindle to the extent that the U.S. Fish and Wildlife Service, during a bitter dispute, listed the owl as a threatened species in 1990 under the Endangered Species Act, shutting down most timber sales on public land and seriously impacting local economies which are still transitioning to this day.

"There are times when the local community has felt its voiced concerns were ignored, avoided or misunderstood. As the policy makers made their decisions the community had to deal with the implications of those decisions," said Rod Fleck, the attorney and planner for the city of Forks, once dubbed the logging capital of the world. The city sits near the coast on the northwestern tip of Washington State.

"Logging had a certain appeal, a romance if you will," said Ted Spoelstra, 89, who began working in the industry in the 1940s. "It was a sad day, there&#39s no question about that, and it still is," he recalled about the ruling in 1990. "There was a lot of environmental pressure coming from the Department of Natural Resource people and they started that spotted owl stuff. They thought that old growth was sacred."

Allowable harvests in the Olympic National Forest dwindled and the unemployment rate in Forks shot up to just under 20 percent in 1991. Now just 4.5 percent of the jobs in Clallam County, which houses Forks, are related to forest products, according to the Washington Forest Protection Association.

Old growth remains a particularly sore point as frustrated loggers eye trees that are dying and even falling down, but remain illegal to harvest.

"I&#39m bitter," said Lawrence Gaydeski, who worked in the timber industry and is a former commissioner of Clallam County, which borders Washington&#39s coast. "Timber&#39s a crop. It would be just like if you went to Iowa and said, &#39you can&#39t cut the corn this year, we&#39ve got to keep it for people to look at.&#39"

Calhoun sympathises with their plight. "Older forests mature and the trees die and if you&#39re wondering how that serves people, it sounds like a waste," he said. "I understand the position the loggers have. They&#39re so practical that they think it&#39s immoral."

However, he explained, "The commercial management of the forests tends to simplify the (forest) structure, and when that happens, the niche for some plant and animal species disappears. In terms of certain species that depend on that complex structure, there&#39s concern that their habitat base is shrinking."

Indeed serious issues still remain concerning the spotted owl. According to the Washington State Department of Fish and Wildlife, in all areas of the state the owl is showing continuing downward trends, with its population decreasing by 10 percent annually.

The department attributes the declining numbers of owls to the loss of old second-growth forests that have complex ecosystems and which are located on unprotected state and private lands. The spotted owl also faces competition from the barred owl, a non-native species that moved west as human activities altered the landscape and suitable habitat became available.

Still others have their own theories. "Old growth had nothing to do with it," argued Bill Pickell, a retired manager for the Washington Contract Loggers Association. "It&#39s not dying because of the loggers, but because it&#39s a wimp!"

Pickell spearheaded a novel campaign to have loggers from the Olympic Peninsula listed as a threatened species back in 1990 during the heat of the timber wars.

"We did send it through all the legal channels," he said. "Most of it was tongue-in-cheek, but I think we got our point across." Ultimately, federal authorities denied the request on the grounds that Homo sapiens are not included in the Endangered Species Act.

A draft recovery plan for the owl released by U.S. Fish and Wildlife Service at the end of April says the species could be rejuvenated over the next 30 years at a cost of about 198 million dollars, if the final plan is fully implemented with participation from states, federal agencies, native tribes, landowners and the public. It would create a network of owl conservation areas on federal land in Washington, Oregon and California.

The report confirmed that competition for food and habitat by barred owls remains the main threat to recovery of the spotted owl.

In the meantime, life continues near the coast. Although the numbers don&#39t support it, Fleck believes that one-third of the jobs in Forks are directly or indirectly involved in the timber industry.

"This community has gone through a tough period and come out on top and kept its sense of values and who it is. It still raised 70,000 dollars for its scholarship auction, and that&#39s pretty impressive," he said.