BEIRUT, May 9 2008 (IPS) - Men clad in black have roamed the streets of Beirut since Wednesday, their faces covered with ski masks or dark kaffiya, as they wreaked havoc in the large avenues leading to the airport or dividing Sunni and Shia areas. As darkness loomed over Lebanon, the winds of discord seem to set the Lebanese capital ablaze. 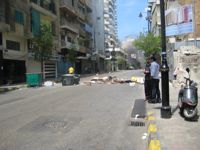 Since the assassination of former Sunni prime minister Rafik Hariri Feb. 14, 2005, allegedly through a Syrian conspiracy, the ruling anti-Syrian majority comprised of the Druze Progressive Socialist Party (PSP), Christian Lebanese Forces and Kataeb as well as the Future movement headed by Saad Hariri, son of slain prime minister Hariri, has been in conflict with the Syrian and Iranian backed opposition, dominated by Shia Amal and Hezbollah movements.

Tension between the two groups has been aggressively building up since Saturday Apr. 26, when French Socialist MP Karim Pakzad was detained by Hezbollah. In the country to attend a two-day Socialist International conference in Beirut, Pakzad was detained and interrogated for four hours before being released while touring and taking pictures in an area considered the party&#39s stronghold. Pakzad&#39s host, Walid Joumblat, head of the PSP and a powerful figure in the governing majority, was clearly unhappy with the turn of events.

A week after the kidnapping of Pakzad, Joumblat made earth-shattering accusations against Hezbollah during a conference. Joumblat claimed that the Islamic party had placed cameras around the airport that could be used for the killing and kidnapping of Lebanese and foreign leaders. He supported his arguments by showing reporters an exchange of emails between Lebanese Defence Minister Elias Murr and army intelligence services discussing the discovery of surveillance cameras in the airport&#39s vicinity.

Hezbollah&#39s sprawling independent telecommunications network has been a growing concern for the government majority. While the &#39Party of God&#39 dismissed the accusations and warned that anyone impeding the network would face fierce resistance, another crisis was brewing. The opposition-backed General Federation of Labour Unions (GFLU) headed by Ghassan Ghosn criticised the government&#39s mismanagement of the economic situation and called for a massive protest denouncing the high cost of living and demanding an increase in minimum wage.

In the early hours of Tuesday morning, the Lebanese cabinet issued a statement announcing an increase of the minimum wage to LL 500,000 (333 dollars a month). It was also decided that Brigadier-General Wafic Shoucair, who is allegedly closely tied to Hezbollah, would be removed from his post as head of airport security. The government dubbed Hezbollah&#39s private communication network as illegal and unconstitutional and declared it would refer the issue to the Arab League and the international community.

As the sun rose over Beirut Wednesday, hordes of youngsters and men in their thirties, responding to the GFLU call, congregated in heavily populated areas such as Mazraa and Tayouneh. The divide between the opposition and the ruling majority came out on the streets of Beirut.

The demonstrations took place mainly in areas loyal to the Hezbollah and Amal movements. Scores of small motorcycles driven by young men in fatigues circulated in the streets, in what seemed like a coordinated operation. Roads were blocked with burning tyres and garbage bins, cars were set on fire, while truckloads of rubble and sand were poured on the airport road.

"We are here to protest against the high cost of living. I cannot tell you more, our leaders will make an official statement tonight (referring to Nabih Berry, head of Shia Amal and Hezbollah&#39s Hassan Nasrallah)," said a man in his thirties, sitting in the Mar Elias shopping areas, a walkie-talkie in hand. A few kilometres away in Mazraa, a densely populated Sunni and Shia region, gunfire echoed among the old buildings. Hordes of youngsters, hiding on street corners, exchanged insults and threw stones at each other. The majority Future Movement offices in Noueiri, an area which was the scene of confrontations, was hit by a hand-propelled rockets. On the border of the mostly Sunni Tarik Jdeideh, men in ski masks with machine-guns were posted on street intersections.

"We will thwart any attack prepared by the others," said a masked gunman, referring to the Amal and Hezbollah demonstrators deployed on the streets. While smoke billowed over Beirut, news of armed men gathering around the government Serail building began to spread fast.

"We are witnessing the creation of the state of Hezbollah at the expense of Lebanon&#39s democracy," said Ramy Rayess, PSP spokesman in a phone interview with IPS. "The Party of God manipulated the Labour Union call (for a demonstration) to attempt a mini coup, which could eventually lead to a bigger one."

Hezbollah leader Hassan Nasrallah&#39s speech Thursday afternoon left little doubt of the party&#39s plans for Lebanon. "A war was declared against us," said Nasrallah, comparing decisions taken by the cabinet against Hezbollah to a declaration of war launched on behalf of the United States and Israel. He threatened that he would go to war with the Lebanese people if he felt Hezbollah was being forced to disarm, and would cut off the hands of anyone who would dare touch the party&#39s weapons.

Nasrallah declared that Shoucair remained commander of the airport security, adding that any officer who tried to replace him would be treated as a spy. He accused the majority government of intending to turn the airport into a military base for the Mossad (the Israeli secret service), the CIA and the FBI.

Since Nasrallah&#39s speech, all hell has broken loose in Lebanon. As the staccato rattle of machine guns and intermittent explosions shake the city, Hezbollah&#39s coup d&#39état is clearly under way.