PAKISTAN: Water – At Much More Than a Turn of the Tap

KARACHI, May 22 2008 (IPS) - For the uninitiated, it’s surreal: men and boys stepping out of their homes into the unpaved and narrow alleys of the Korangi Dhai slum in the wee hours before dawn, armed with rolls of colourful plastic tubing and heavy electric pumps. 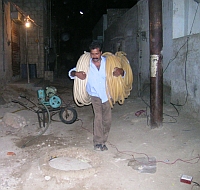 Armed with pumps, tubes and cables slum dwellers rise before dawn to tap water from the mains for their daily needs. Credit: Shakil Gill/IPS

For over 15 years the only way that squatter families living in the slum settlements of Nursery Town, Francis Town and Joseph Gill Town, that fall within the Korangi Industrial and Trading Estates (KITE), have been able to access water for their daily needs is by illegally tapping it from the mains.

Over 60 percent of this port city’s population of 16 million lives in informal settlements, according to urban planner Arif Hasan. In the absence of proper infrastructure, many communities have improvised sewerage, drainage and water supply systems.

In ‘Understanding Karachi’, a book written by Hasan, 90 percent of these homes "have linked themselves illegally to government supply systems".

But Shahid Gill, a resident refutes this allegation. "Each house paid Rs 2,500 (36 US dollars) to the union council (smallest administrative unit), so how can you call it illegal?" says the 28-year-old who works as an office boy with a non-governmental organisation (NGO).

Illegal connection points can be seen as small rubber protrusions and the pipes are readily visible alongside storm water drains that run parallel to the main lines. It is from these connections that water is siphoned off into homes using suction pumps running on illegally tapped electricity.

This informal infrastructure is not officially recognised and, therefore, cannot be integrated into plans for sewerage and water supply systems being planned by the government.

"Karachi, with a population of 16 million with a minimum requirement of 20 gallons per day per person, needs at least 320 million gallons per day(mgd)," says Perween Rehman, director of the Orangi Pilot Project’s research and technical wing. The industries need an additional 123 mgd, she says.

There are two main sources of water supply to Karachi – from the Indus river, which supplies 645 mgd, and the Hub dam that supplies about 50 mgd. But because the latter is rainfed, the supply fluctuates between 30-75 mgd.

Among other factors, about 15 percent of the water is wasted due to technical leakages and another 41 percent (or 272mgd) is siphoned off and supplied through tankers. "And this is a very conservative estimate,’’ says Rehman, talking with IPS.

As a result, the 18 administrative divisions of Karachi that are supposed to get a total of 417.65 mgd from the government-owned Karachi Water and Sewerage Board (KW&SB), receive only 293 mgd. And then the distribution is inequitable with the affluent areas such as the Cantonment receiving as much as 100 percent or even 133 percent of their requirement (in the Defence Housing Authority), while others must make do with as little as 30 to 57 percent.

Among other recommendations, like independent power supply at the pumping stations to stem the interruptions, Rehman says authorities should focus on metering to assist in ensuring all areas get their required quota of water.

"According to the KW&SB sources, there are 1.17 million water consumers (those that get water from the board directly) in Karachi, of which 758,500 are on the billing rolls while only 163,000 pay regularly. ‘’No action is taken against the defaulters and the KW&SB runs at a perpetual loss," states the 2002 edition of the same book by Hasan. The situation has not changed at all, says Rehman.

While the slum dwellers of Korangi also do not pay for their electricity and water, they must work hard at tapping the utilities.

"The first thing to do is to attach the electric wire with the help of a kunda (a metal hook) slung over a power cable,’’ explains Asif Ayub, 17, a movie maker. "It’s not an easy task in the thick of the night, especially for those who are still groggy from sleep." Once the connections are set the water is pumped into storage tanks inside the homes.

With such a jumble of pipes and cables safety is a concern. "Getting electric shocks is quite common,’’ says 28-year-old Shakil Gill, whose chore it was for six years. But now, following his marriage, he has been excused and his younger brother has taken over.

"It’s usually the youngest male in the family, but one who is old enough to be able to carry the heavy gear, and fix the wiring," interjects Kashif Naeem, 18, who has been on duty since he was 14. "The idea is that he’s someone who does not have to get up early to go for work,’’ said Naeem who dropped out of school after grade six.

There is no letup for 16-year-old Shahin Waris who is in the middle of his matriculation board exam. "I’ve been doing it for the past three years." Asked if someone else can take over so he can prepare for his exam as well as take enough rest, he explains: "I have an older brother, but he is in his second year of medicine so…"

In homes where no men are available for water duty, the women step in.

Water supply is available from four to six in the morning every alternate day in the mainline in the Nursery Town area. "It used to be from two to six and with the reduced supply it’s like war here. Every few days you will see tempers erupting," says Lawrence, a municipal sanitation worker, who has to report for duty at eight.

And then there are days when the mains run dry. Or there is no electricity supply.

"It takes us almost an hour set up the equipment. Can you imagine the frustration? And the extra burden we incur buying water for the day?" says Jamaluddin, wrapping up and fighting back his anger.

The more enterprising among the squatter residents have taken advantage of the erratic supplies and entered the water supply business. They have several suction pumps and large storage tanks. "When the water does not come in the mainline, we buy water from these people,’’ says Gill.

Squatters can also buy water from tankers at Rs 250 (3.73 dollars) per 1,000 gallons, though this is brackish and unfit for drinking, or from individual water suppliers roaming about the lanes with water loaded on donkey carts at Rs 100 (1.49 dollars) per 25 gallons.